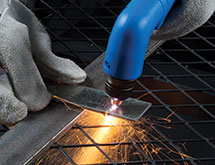 Founded in the early 1980s as Nu-tecsys Corporation, Nu-Tec Systems began its days as a manufacturer of premium-quality MIG, TIG and plasma torches to the industrial fabrication market. The company remains committed to its original mission, but it has expanded its product offerings to encompass all aspects of the global welding market.

“Nu-Tec has more than 20 years of experience with more than $2.5 million in specialized welding and plasma cutting sales to industrial and automotive repair customers,” President Michael Cooper says. “Nu-Tec specializes in smaller, easy-to-use systems, unlike our large industrial-focused competitors.”

The creation of Lightning-Saw is one of the more important recent undertakings for Nu-Tec. Formed as an offshoot company of Nu-Tec, Lightning-Saw is focused on bringing an entirely new metal-cutting saw to the contractor market.

Lightning-Saw is a portable metal cutting saw that is designed to revolutionize the construction, heating and air conditioning and do-it-yourself markets. It is a lightweight, compact metal-cutting saw that cuts through all types of metals to 1/4-inch effortlessly using an electric cutting arc of ionized air, or “lightning,” which is only the width of a human hair and less than one-inch in length.

“Lightning-Saw is a natural market expansion for Nu-Tec as we have evolved from being a manufacturer of welding torches only into a full solution provider,” Cooper says. “We saw a need for simple welding and cutting systems to be offered to somewhat inexperienced customers that were not in the traditional welding channel. By supplying these unique products, we have grown steadily. The Lightning-Saw product is so unique that it requires a company focused on a single metal-cutting saw for the HVAC contractor market.”

The Lightning-Saw product is designed specifically for the HVAC contractor installing ductwork on the job site. Cooper says these customers demand a reliable, low-cost portable cutter for sheet and support metal duct. He says any contractor that is involved with HVAC, electrical, plumbing, siding, roofing or installing metal studs can cut their labor cost considerably with the Lightning-Saw.

“They desire safe, fast, smooth cuts on all shapes of metal, and the Lightning-Saw provides this better than any other tool,” Cooper says. “Since it slices with a lightning arc, it leaves a smooth, non-sharp, edge even on thin sheet metal.”

The Lightning-Saw was developed to replace older, outdated methods of cutting metal on the job site. Traditionally, metal is cold-cut with either a toothed blade or pinch-sheers. The blade is slow, noisy and limited to straight or circular directions. Additionally, it requires constant replacement of steel blades. Pinch sheers cutting is slow, dangerous and limited by direction and material shape. Traditional arc cutting with either gas or electric systems has been limited to the shop rather than on-site due to its large size, power requirements and safety.

“All of these limitations led us to develop a safe, portable metal-cutting system that simply plugs into a standard outlet similar to any powered hand tool on the truck,” Cooper says.

Among the key attributes of the Lightning-Saw are its portability, capacity and power. It is the size of a circular saw case and weighs less than 30 pounds. It plugs into standard 115-volt electric outlets and slices metals from 28GA to 1/4 inch.

All of the cutting power is supplied through a 13’ cable to a compact hand-held torch capable of cutting metals in any direction. It can be used in tight space where shears or blades could not go, as its cutting arc is laser thin and less than 1 inch long. It is safer, as it cuts without flammable gas or sharp teeth, and it has no blades. Instead, it features consumable tip and electrode that install as easily as changing a drill bit. Cooper says these features provide advantages over any other metal-cutting system.

Since its beginnings, Nu-Tec has worked to provide the highest quality and most technically advanced welding systems to customers. Nu-Tec manufactures top-quality welding and cutting products that are guaranteed for high-end performance. Its product line includes both air and water cooled hand-held, robotic, fume extraction, spool-gun and push-pull MIG torches, TIG torches and Plasma torches as well as MIG, TIG & Plasma power supply systems.  The company also offers a complete line of required accessories to support each of its’ products in all applications.

The company offers an array of products and services that range from a 20-amp plasma cutter to a 500 amp, water-cooled robotic welding torch. It continues to manufacture its diverse product portfolio out of its factory north of Chicago, while also having gained access to global resources that allow customers to gain a competitive advantage thanks to superior welding technology.

Among its newer products are the Plasti-Weld System, Auto and Dual spot welding dent pullers and the aforementioned Lightning-Saw portable metal cutting system. The Nu-Tec Plasti-Weld System is billed as the most powerful and only complete plastic repair tool for the automotive professional, providing superior output power to allow the technician to quickly embed score-cut stainless steel staples in all types of plastics and to reflow surface material with the melt-knife attachment blade. The Auto and Dual spot dent pulling systems combine ease of use at low cost for pulling on both steel and aluminum panels.

Through its many years of experience, Nu-Tec has learned that product support is critical to its customers. When the customers have a question about a specific material or a problem with the machine, Nu-Tec recognizes that they want quick answers. To address this, Nu-Tec has implemented both a toll-free call center and on-line technical support center. The customer may contact these with any question about their needs, allowing Nu-Tec to direct them to a solution.

“It may be as simple as where to buy a new cutting tip or what thickness of stainless steel will the machine cut,” Cooper says. “No matter what, their question is answered quickly and professionally.”

In addition, the company has invested heavily in automated communication via the web and smart phones, as well as in the latest electronic technology for performance and efficiency. “Our machines incorporate the latest in electronic inverter technology, which allows for greater cutting capacity at reduced power levels with lighter system weight,” Cooper says.

Thanks to strong offerings in its traditional product portfolio and the promise of the Lightning-Saw product, Nu-Tec is understandably optimistic about the future.

“We see a number of great growth opportunities by utilizing new technology to expand into new markets,,” Cooper explains. “The Lightning-Saw is a perfect example of the transition from heavy industry to on-site field construction.”