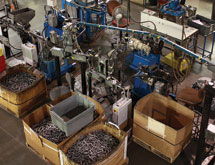 “On Belay” is a climbing command used to let a climber know that the equipment is ready and it’s safe to climb on. Omega Pacific has been ensuring the safety of its products to keep climbers reaching higher peaks for more than two decades, while maintaining operations on shore, promoting the growth of its workforce, clients and providers.

Production offshore has changed in the last few years, making it not as lucrative as it used to be, so many companies are bringing their manufacturing operations back to the United States.

“A lot of companies are advertising, ‘We’re back’,” Nadeau says. “Well, all we have to say is, ‘We never left.’ We worked through all the problems to become more efficient and remain in the U.S. We never abandoned our roots – we never left.”

In order to keep its competitive edge, Omega Pacific automated some of its production processes in 2009 without losing its human touch completely. “We brought in robots to allow us to be more efficient,” Nadeau explains. “We put in a system that allowed repetitive motions to be taken out of the equation, but we never displaced any worker by bringing in automation. If you are running a hydraulic press and we bring in a robot, we would never say, ‘This is your replacement, here is your pink slip.’”

In fact, Nadeau explains that automation has benefited its employees in a variety of ways. “By taking away repetitive motions, the worker is not subjected to the industrial injuries associated with them and they can concentrate more on quality checks,” Nadeau says. “We have also trained employees to program the robots, work with them and understand their operations. By training them, these workers have become more important to us, and therefore we’ve increased their job security.”

Reorganizing the manufacturing processes allowed Omega Pacific to weather the economic downturn without having to fire any of its employees. “The owner of the company and I got together [in 2009] and decided that we were dedicated to our workforce and we were not going to lay anybody off,” Nadeau remembers. “It wasn’t good for them, and it wasn’t good for us either, to lose our trained workers with the history and product knowledge that they have. We have never had layoffs in the history of the company.”

Omega Pacific is also fiercely loyal to its suppliers. “The philosophy of maintaining our production within the U.S. is one where you have to seek viable components,” Nadeau explains. “It’s not always about dollars and cents.

“We could order some of our products from Taiwan and save money, but we have a local supplier in Idaho who provides us with great products,” Nadeau continues. “And even though it costs a little more, we are helping him support his company of seven people.

“It’s working those relationships with suppliers and understanding that we need to rely on each other. That is what maintains us [U.S.-based companies] throughout the good times and the bad,” he adds. “We know our suppliers in and out and that type of contact has made us successful with all our vendors.”

Omega Pacific extends its loyalty to its customers. Although the company has a web site where its products can be purchased, its focus is promoting its clients’ retail operations.

“We don’t want to compete with the retailers that sell our products, but there are markets where there aren’t any stores nearby, so people who want our products can only get them by ordering on-line,” Nadeau explains. “We don’t offer any specials that we would not offer to our retailers, we don’t want to take business away from them.”

The company plans to redesign its website to encourage more forums and direct contact, offering a more comprehensive experience for its clients and increased interaction for its end-users.

Omega Pacific has introduced many signature features to climbing gear over the years. “We have innovative features, like the side-swing carabiners that have a larger gate opening, we have hooded gates that prevent the ropes from being abraded and frayed,” Nadeau says. “We want to maintain our manufacturing edge, so we have a new product development team composed of engineers, our sales force [most of them avid climbers] and some of our manufacturing people.”

The group meets once a month to discuss ideas for new or improved products. The company also takes ideas from climbers into consideration, some of which end up in the product line.

Nadeau sees a world of expansion for the future of Omega Pacific. “We have projects that will take us through the next 10 years,” he says.