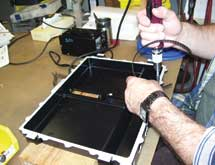 Like many manufacturers recovering from the recession, Pace Industries’ St. Paul, Minn., division is in the midst of “rightsizing” its operations to remain profitable. However, that doesn’t mean the aluminum die caster has a lesser need for qualified, experienced manufacturing employees. “The biggest difficulty since growing is finding the people to do the work,” Division President John Coats explains. “As surprising as it may sound, it takes a long time to find 10 people. They don’t like hard industries like this or are not suited for them. This has been a struggle since the spring when business jumped considerably.”

In response to the labor shortage in the area, this division launched an apprenticeship program in conjunction with the state of Minnesota at the beginning of 2011.

According to Coats, this is just one of the many ways Pace Industries is making itself more attractive to recruit and retain the top people in the industry.

“I’m most proud that the corporation has introduced a lot of programs that are people-based,” Coats says. “There is the marketplace chaplain program and many other concepts that help grow people and make them more productive.”

“The thing I’m most proud of is the corporation has taken the initiative to make this happen because they really care about individuals,” Coats adds. “This shows where Pace is going as a whole.”

This division – which is located in the St. Paul suburb of Arden Hills, Minn. – was founded as St. Paul Metalcraft in 1960. At that time, the operation focused on producing small zinc and aluminum parts using unique die configurations.

The company was acquired by Pace Inc. in the 1990s, which was later purchased

by worldwide leader Leggett and Platt. Leggett and Platt later sold off its die cast division, which included the St. Paul facility as well as 11 other companies and two tool and die shops.

Coats says the division focuses on medium- to low-volume parts.

Pace Industries continues to drive waste and inefficiency out of its operations to improve the bottom line in the wake of the economic crash of late 2008.

“Capacity in die casting has decreased the last several years for a variety of reasons, and we’re having to adapt to that,” Coats says. “We continue to try to im­prove our delivery, quality and costs. To be out in front of the market is key to growing the business.”

While die casting capacity has de­creased, customer demands for perfection certainly have not. Coats says clients still expect zero PPM from every order, and the St. Paul division is striving to meet that demand by working toward its TS 16949 certification for the automotive industry.

“They do not to want products they have to sort through or look at,” he explains. “We are striving to move in that direction.”

At the St. Paul division, Pace Industry can produce up to five different alloys of aluminum based on customer specifications.

The aluminum is melted down in furnaces before injected into ma­chines that force it into a die, which forms several parts at a time based on the number of cavities.

From there, the excess is trimmed away for reuse and the product moves on to the next operation process. Based on the customer specifications, the St. Paul operation also has the capabilities to assemble parts with washers, rubber gaskets and heating coils, as well as a variety of additional small assemblies.

In the ongoing attempt to right-size its operations, Coats says the St. Paul division is pursuing options for robotic automation to increase consistency in its products.

“We’re looking at consolidating some of the work as well as trying to improve the quality of our outside processes,” Coats says.

Pace Industries prides itself on offering a variety of services through locations throughout North America.

Pace’s Airo division in Loyalhanna, Pa., was founded for producing aluminum die cast compressor blades for the nuclear industry, the company says. Since then, that division has grown to serve a variety of specialized markets through its custom-designed, 60,000-square-foot manufacturing facility.

Its capabilities include tool design and construction, impregnating, pressure testing, chromating, painting and assembly. “With our technical background, experienced staff and management team, the Airo Division can become your single-source for precise aluminum die cast products,” the company says.

The division’s impregnation services is what separates Pace from the competition since few die casters offer this capability. This process seals porosity in any metal casting that must be pressure tight, and the treatment is applicable to iron, steel, copper, brass, bronze, aluminum and magnesium alloys, according to Pace. The company also says quantities from one to several thousand pieces can be treated.

The Airo division also has installed a complete new chromating line with an overhead crane system. According to Pace Industries, chromating is a surface treatment given to die castings to increase their resistance to corrosion. The coating also serves as a primer for base paint or dyes.

South of the Border

Located four hours south of El Paso, Texas, Pace Industries’ Chihuahua, Mexico, division was founded in 1998. Through this division, the company serves as a leader in the Mexico aluminum industry by providing extensive value-added services like painting, machining, assembly, impregnation and chromating.

Pace Chihuahua has expanded its capabilities and services for customers through a 200,000-square-foot manufacturing facility.