Back to Profile Gallery > Pace Shave 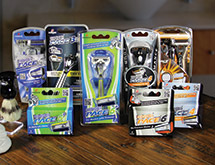 Pace Shave occupies a unique position in the razor market. Its products and the expertise of its parent company make it a worldwide leader in technology, but because it focuses on private-label work and supplying OEMs with blades, it doesn’t have the name recognition other brands in the industry have. President Ken Hill says that despite the deep pockets of its competitors and their non-stop advertising assaults, Pace Shave has been able to create a highly successful niche for itself because the quality of its products shines through.

The company is the U.S. subsidiary of Dorco, a South Korea-based manufacturer of razors that recently marked its 60th anniversary. In 2000, Dorco began to branch out from the Asian market to serve other geographies, and in 2008 it opened its American operations. At first, Pace Shave concentrated on serving the private-label segment, but soon it captured portions of other markets, as well. Today, Hill says, the company holds 35 percent of the private-label market, but it also supplies bulk razors and blades for other manufacturers and provides direct-to-consumer razors under the Dorco USA brand.

Although the razor market has been dominated by a few big names for a long time, Hill says the conditions of the market are changing. As more consumers look for better deals on superior products, they are choosing new direct-to-consumer products that offer a better shave at better savings than the brands found at major retailers. In this new environment, Hill says, Pace Shave is leveraging the technology and innovation of Dorco to gain a better foothold in the United States.

Hill says the technology and innovation that Pace Shave brings to the U.S. market through its parent company are its primary advantage, and the company boasts a number of patented technologies that make its razors more durable and more effective. One of these is the company’s Venetian Flow® blade design. This means the blades are angled into place rather than welded like most other razors. Without the need to weld blades, the blades’ surfaces are smoother, which provides fewer opportunities for debris to accumulate and shorten blade life. “It’s a whole different way of blade-making,” Hill says.

Another innovation Pace Shave brings to the market is the readying bar on its cartridges, which is a rubber bar containing numerous tiny fins that grab hairs and bring them up into position for a single-stroke shave. The company’s triple-formula lubricating strip also allows smoother shaving for sensitive skin.

Pace Shave has more than technology on its side, as well. Hill says that with all of the company’s blades made and coated in South Korea but assembled and packaged in lower-cost manufacturing centers throughout Asia, the company also offers its customers a much better value than its competitors. “We’re able to really leverage a great-quality, high-technology blade, but use low-cost assembly centers to keep the costs down,” he says.

One of the biggest challenges for Pace Shave in the United States initially was going toe-to-toe with major razor manufacturers with long-established brands and deep marketing resources. However, the paradigms in the razor market are beginning to shift away from these entrenched brands, and Hill believes this will be the opportunity Pace Shave needs to really break through to consumers. “We’ve been fortunate in the trend of consumers moving to online purchasing,” he says.

Many smaller razor manufacturers like Pace Shave have found success recently in direct-to-consumer business models that allow consumers to purchase razors and/or blades online. In some cases, these take the form of subscription services where consumers receive regular deliveries of replacement blades or other products. Under the Dorco USA label, the company has been successful in marketing its products directly to consumers without the heavy spending on marketing and advertising that its major-brand competitors utilize.

“We can make the case that you can get the same quality at a much lower price, and we’ve made that argument through e-commerce,” Hill says.

The shift toward this direct-to-consumer model indicates that consumers are on Pace Shave’s side when it comes to price points, Hill says, and the company’s superior technology and price points should continue to fuel its growth throughout all segments of the marketplace. Even as technology improves and blades last longer than ever before, Hill says the value Pace Shave offers should make it a bigger name in the near future.