Back to Profile Gallery > Paslin 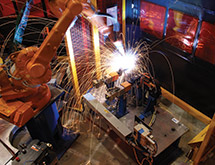 Detroit-area Paslin wants to cultivate the next generation of skilled workers in the manufacturing industry, and the company is taking the lead in this initiative.

The United States cannot maintain its position as the world’s manufacturing leader unless it develops and maintains a skilled workforce, COO Kerry Hammer says. “We want to develop new, upcoming talent,” he says. “The demand is so strong.”

The trouble is, people entering this field have an outdated perception of the manufacturing world. “Manufacturing has become a dirty word in high school,” Hammer insists. As a result, too few secondary schools encourage it as a viable profession that offers good wages and benefits.

Additionally, high schools are dropping shop classes – often a student’s first exposure to the trades – from their curriculum. Offerings are not much better at community and junior colleges. Only a few schools offer up-to-date manufacturing and technology training.

The National Association of Manufacturers (NAM) agrees with Hammer’s assessment. “Many view manufacturing jobs as dark, dirty and dangerous, a caricature of what they were decades ago,” the association said in a 2014 report about manufacturing and the next generation. “Such perceptions could not be further from the reality of today’s industry. Manufacturing is sleek, it is high tech and it is exciting. And manufacturing opens the doors to long-term, high-paying and deeply satisfying careers from the shop floor to the C-suite.”

Paslin believes that its apprenticeship program can open the doors to those careers. The program is ideal for students not interested in a traditional college education and would like to gain proficiency in a skilled trade, or those who cannot afford one, says CEO Kirk Goins. The program, which recently welcomed its first 17 students, is designed to introduce the next generation to modern manufacturing. “They get trained in all aspects of our business,” Goins says.

Students who successfully complete the program earn an associate’s degree and garner the skills needed to qualify for a manufacturing job. Paslin hopes to add six to 12 students to the program every six months, Goins says. The company works with area high schools to recruit students for the program.

Graduates might have opportunities to work for Paslin or continue their training at a four-year institution with tuition reimbursed by Paslin.

The time is right for the ambitious program. Paslin hopes to expand beyond the automobile industry within the next few years and is considering entry into construction, agriculture and heavy machinery, Goins says. The company lacks the experience in those markets that it enjoys in the auto industry but believes a well-trained, motivated workforce could give it a competitive edge, he says.

More than 80 percent of manufacturers report a moderate to severe shortage of highly skilled workers, the NAM said in a recent report. “On average, manufacturers lose 11 percent of their earnings because of increased costs from production delays, wasted materials and shutdowns associated with the skills gap.”

Passion for the Job

Perhaps meeting Goins and Hammer would be a sufficient first step to convince these novices to consider entering the manufacturing field. Both men have a passion for the industry as well as the work Paslin performs. Consider, for example, Hammer’s description of watching an assembly line that his company built and assembled.

“It’s like watching the Russian ballet,” Hammer says. “It’s a feeling that’s hard to describe.” He adds that it’s routine for Paslin employees and members of a customer’s team to exchange high fives and congratulations when a new or adjusted assembly line works as planned.

Paslin works with auto manufacturers and their Tier I suppliers to build assembly lines and offer customized solutions. “We design assembly lines, and we work with companies to refine their processes,” Goins says. “There are a lot of things we have to work on with our clients.”

Common scenarios that lead Paslin to work with automotive clients to modify their assembly lines include midyear enhancements, the need to increase or decrease production and the launch of a new product, Goins says.

The market is extremely competitive because a few automobile manufacturers control the space. The only ways to stay ahead are to secure long-term agreements with the manufacturers or offer innovative ideas. “That’s certainly one of the interesting parts of our business,” Goins says of proposing customized solutions.

Paslin is a full-service design build organization. The company provides manufacturing equipment to the global market, while creating cost-effective manufacturing solutions that address customers’ needs. It is a leader in the construction and integration of manufacturing assembly and automation systems.

Paslin started out in 1937 as a small stamping facility in Warren, Mich. Daniel Pasque and Donald McFarlin incorporate the venture and named the business after both partners. The first facility supplied small stamped components to the automotive industry.

Paslin’s first gauging fixture was  provided to a small automotive Tier I supplier in 1945.  The  fixture was used to  check and validate the dimensions of machined parts according to the customer-supplied specifications. The fixtures were installed as a quality checkpoint at the end of the assembly system. This led Paslin to eventually supply welding automation.

In 1980, Paslin built its first of many welding assembly lines, which was  shipped to the General Motors Buick City Plant. This venture started Paslin on its route to becoming a leading provider of robust assembly systems to automotive Tier I suppliers and OEMs.

Paslin incorporated the Paslin Engineering Group in 1997, which solidified the company as a major participant in supplying vertically integrated turnkey systems.

Paslin combines engineering and the management of information, so diverse systems can work effectively in every aspect such as cost of production, safe work environment and ability to adjust production by responding to market demands.