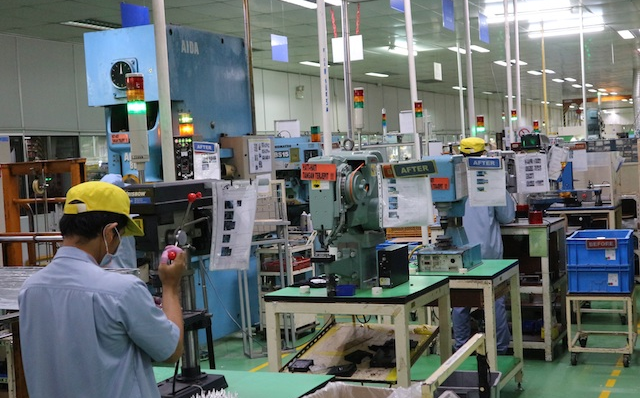 Since developing the first rotating warning light in 1965, Patlite Corp. has become Japan’s largest manufacturer of visual and audible warning devices. Its initial markets were public safety and emergency vehicle lighting, but 70-year-old Patlite has since become a leading global provider of LED status indicating lights, sound alarms, visual and audible communication network systems, and solutions that enhance the safety, security and comfort of workplaces and communities. It’s expertise in building such products has led to leading market share worldwide.

Patlite’s growth in the United States has been equally impressive. As manufacturing has continued to focus on lean methods, the ability to quickly diagnose equipment malfunctions and production bottlenecks has become crucial. Patlite, among its other specialties, has products that can help identify and respond to such problems.

That makes Patlite’s products crucial to a manufacturing operation. “We strive to be a strong partner with U.S. manufacturers,” Managing Director of U.S. Operations Ken Kosaka says. “With our products, we are well-suited to meet the demands of many U.S. factories.”

Paul Mizuki, sales and marketing manager for Patlite’s Torrance, Calif.-based U.S. operations, notes that the diversity of its product lines allows the company to thrive in the U.S. market. “The biggest thing for us is that we have high-quality, diverse products that last a long time,” Mizuki notes. “Whereas many companies only offer one color with their LED status lights, we offer multi-colored programmable status lights as a way of signaling various complex applications.”

The company plans to expand its presence in the manufacturing sector in particular. “In North America our main focus is on factory automation,” Mizuki notes. “That is generally where our products are used the most, and where we see the most opportunity for our new “smart” products.”

To grow its market share in this area, Patlite has introduced products such as the LA6. This LED visual warning system alerts factory workers when machines have stopped operating and it can track the time of the signal. Sopan Khurana is a technical engineer with Patlite and has helped develop the product. “What we are able to do is put products on a manufacturer’s network 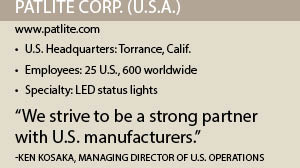 that analyze the health of the machines from a remote location,” Khurana says. “Now you can actually log that data, and then predict where bottlenecks are likely to occur based on the performance of the machines.” Khurana also notes that there is a fairly quick process where a user can determine which machines have been down the longest, and which need parts. Further, the system can also log which machines have the highest error rate. “You can collect all of this data,” Khurana adds. “And determine which machines are reliable, and which should be replaced.”

As factory production has become more automated and data driven, Patlite has aimed to create products that can take advantage of the “internet of things,” or the ability of pieces of equipment to communicate with one another. “We have eliminated signal wires,” Khurana says. “Essentially with one Ethernet cable plugged into a PLC (programmable logic controller), we are now offering a signal tower, the LA6-POE, which has  ‘Power over Ethernet’ capabilities.’” In essence it is a network signal tower that can be powered through a LAN cable. Furthermore, the signal tower can be programmed over the Ethernet connection to display various combinations of colors, making the LA6-POE a fit for a wide range of applications.

Importantly, Patlite is able to distinguish itself from its competitors through its ability to collect data on underperforming machines. Whereas many competitors offer signal towers, Patlite gives its users the unique ability to collect data and determine where potential problem areas may arise with various pieces of equipment. It also eliminates the need for time-consuming data entry by workers, as all performance data is logged by Patlite’s equipment.

For Mizuki and Kosaka, the North American manufacturing market presents a wealth of opportunity, though it does come with its share of challenges. “Though we are well suited to meet the needs of manufacturers,” Kosaka states, “the manufacturing sector is so broad, with each industry having their own tradeshows.” Indeed, Patlite’s products can serve any industry from food and beverage to aerospace to automotive and others. “We have been experiencing double-digit growth in recent years,” Kosaka says. “And would like to continue that trend.”

Patlite operates in a very competitive market in the United States. To compete effectively it is reaching out to more distribution channels in the U.S. market. “Though we have increased our efforts in the digital area such as revamping our website,” Mizuki notes, “we still need to do a better job of reaching distributor partners and letting them know about our range of products.”

In all of its locations, the primary focus is on quality products, which comes from decades of manufacturing in Japan. “I think in Japan quality is very important,” Kosaka says. “From the top all the way down to workers on the floor, we have always tried to instill the idea of putting the customer first.”