Back to Profile Gallery > Pentaflex Inc. 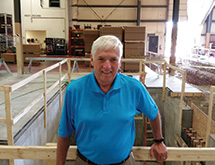 Pentaflex Inc. has established a reputation for itself over the past 40 years as a leading contract stamper specializing in the deep-draw, heavy-gage stamping process for the heavy truck industry. Having proven its ability to produce high-quality parts in large volume, Pentaflex has grown significantly over the past three years.

“Starting in 2012, sales have gone from $24 million up to $36 million. A good portion of that is from the heavy truck market, which has grown significantly over the past three years,” President Dave Arndt notes. “That has helped business a lot. We have added new customers, capabilities and built an addition to our facility to respond to the growing needs of our customer partners.”

To support growing demands, Pentaflex is adding 26,000 square feet to its headquarters in Springfield, Ohio, totaling 149,000 square feet. The extra space will make room for a new 1,600-ton mechanical press and space for an additional press in the future. The addition will also enable the company to add welding cells, which will allow it to perform more value-added assembly work.

The 1,600 mechanical press will be used primarily to stamp brake spiders – a part Pentaflex has been supplying to its customers in the heavy truck industry for the past 26 years. The new press will be installed by the first week of September and the expansion to the facility is expected to be completed in early November.

Pentaflex’s presses range in tonnage from 75T to 2300T.  The larger presses at 1600T to 2300T are hydraulic to support the deeper draw efforts, which include parts up to .625-inch thick with a 6-inch draw.

“We have always been known as a deep-draw, heavy gage stamper but beginning in 2011, we started to acquire presses that would diversify our capabilities,” Arndt says.

First, Pentaflex acquired an 880T mechanical presses that allowed it to gain exhaust and brake system stamping business in the .060- to .080-inch thickness range.  Then in 2014, Pentaflex acquired two presses, a 330T and a 700T with servo coil feed systems, which have been considered to be game-changer presses for Pentaflex. In several instances the servo presses have permitted Pentaflex to double strokes per minute on existing business and have qualified Pentaflex for several new awards.

Pentaflex has been the proud recipient of four Manufacturing Excellence awards from the Precision Metalforming Association over the past two years. The awards were for safety, quality, productivity, and education and training. “We have an aggressive lean action plan in place, which includes formal lean training for employees,” Arndt says.

For example, with the design revision of a 15-pound part to a beefed up 35-pound part, Pentaflex was able to bring the blanking process in-house by setting up a press cell with a process for blanking the part. Pentaflex then uses a mechanical transfer system to transfer the part through four dies in a 1600T hydraulic press. As parts come off the press they are then put through a new automated inline washer, which helps reduce waste and increase productivity. The new machines require only a two-person crew, which is a reduction in manpower from the six-person operation it was before. “Those are the things we are trying to look for,” Arndt says.

Pentaflex continues to improve its lean action program by sending six employees to training one day per week for six weeks to learn about different lean systems, perform lean activities, and report back their findings.

“The purpose of the training is to implement these new ideas,” Arndt explains. “They learn, for example, different ways to reduce paper usage in the office and set up time changes to increase productivity in the stamping presses.”

Maintaining a lean operation is important to the company’s success, but Pentaflex also ensures it is producing high-quality parts through multiple certifications. Pentaflex is ISO/TS 16949:2009 certified and holds an AD2000-Merkblatt HP0 medical certification.

Later this year, Pentaflex plans to have its new presses running at capacity and will add more machines to increase its capabilities after the addition to its facility is complete. “We are privately owned and the McGregor family is very supportive of the company and allows us to spend money to improve the facility and expand,” Arndt says. “That’s a great thing for us.”

Pentaflex will continue to grow over the next three years with a strategic plan that targets adding new customers every year.  In most markets, the company only supplies one or two customers and is focusing on expanding that part of the business and increasing its number of customers. “I have a sales director who is on the road all the time to find new customers and see what kind of interest there is,” Arndt notes. “My target is to bring in three new customers each year and grow to $45 million in the next three years.”