Back to Profile Gallery > Portec 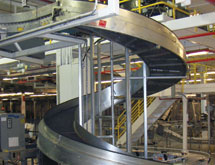 When people put their baggage in the hands of airport workers, or give their packages to courier express companies, they trust these items will be handled with care. To ensure they are, airports and parcels carriers often turn to Portec, CEO Marco Oropeza says.

Based in Canon City, Colo., Portec manufactures power-belt curves, spiral lifts and chutes, merges, queues and other specialty power conveyors. These have uses in a variety of places, including baggage and parcels handling, and distribution, warehousing and industrial manufacturing systems.

Brothers Charles and Ed Fry started the company in 1957 as Fry and Co. Initially, Oropeza explains, the company created conveyors to bring materials out of mines. But in 1958, the firm created the world’s first belt power curve conveyor, which was sold to an airport baggage handling facility.

In 1968, Portec purchased Fry and Co. and has since made many enhancements to the belt power curve. Today, Oropeza says, the company employs a staff of approximately 100 and enjoys sales north of  $20 million.

Portec sells its products through integrators and a broad network of independent manufacturer representatives, but it has a diverse range of end users, he says. Not only do these include airports all around the world and delivery services like FedEx or UPS, but also Kellogg’s, Procter & Gamble, Sears, Target, Walmart and Reebok.

Portec has branched out internationally, as well. While it has 135,000 square feet in two facilities in Canon City, it has another manufacturing location spanning 4,650 square meters in Shenzhen, China, and a representative office in Shanghai. “We have now a very good position for serving that market locally,” Oropeza says, noting that the Shenzhen facility achieved ISO 9001 certification in May 2012.

Oropeza joined Portec in February 2012. Previously, he worked for Siemens for more than 26 years, where he gained extensive international experience.

“That has helped me a lot with the major expansion for us outside of the United States,” he says, noting that it is critical for Portec to set its sights beyond U.S. borders. “It doesn’t make much sense to try serve the global market with manufacturing on only one side of the pond.”

Along with its locations in China, Portec has had a joint venture with a company in Hong Kong since 2010 and holds a 60 percent share in the enterprise. “It has been very encouraging [for us],” he says, adding that the company is looking at ventures in other geographies.

Recently, Portec has invested strongly in its manufacturing processes. For instance, the company is about to purchase a laser cutter, which will improve its manufacturing flexibility and productivity, Oropeza says.

Portec also has changed its company culture over the last six months under the new core value “We Care.” So far, Oropeza says, its staff has adapted to it successfully.

“They are already motivated,” he says. “They understand what we are trying to do and we have been working very hard to maintain the reputation our products have in the market and achieve the same reputation with our people.”

Portec also strives to be connected to its community. While the firm follows environmentally beneficial practices in its facility, it has partnered with a local company to collect trash for recycling, Oropeza says.

“It’s one of the things I’m very focused [on doing],” he says. “We have to be seen as a company that is linked to the community.”

Additionally, when a local school was looking for new toy container, Portec was happy to design, construct and donate it.

“It’s nicer for [employees] to come to a company that is also doing something for their community; they feel proud about it,” he says.

Oropeza says Portec is working to keep growing. The company also wants to grow its product lines, which includes a new member of the Chute Master Family, a new Short Merge and a new design for its curves.

“We are making sure we understand the challenges the industry is facing and implement products and/or features to help our customers address them,” he says.