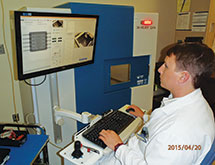 When Mars rovers Spirit and Opportunity landed on the red planet in January 2004, their initial mission was only 90 days long. But component testing by companies such as Precision Test Solutions, which evaluated semiconductors used in optic systems onboard the rovers, resulted in sturdy designs able to withstand the isolation of space, allowing the rovers to beam back dramatic images as they far surpassed their expected service time. More than 12 years later, Opportunity continues to examine Martian soil while Spirit finally lost contact with NASA in March 2010 when its solar panels became coated in Martian dust. “[Opportunity] is still working,” says Mike McEntee, senior director of sales, marketing and quality for Precision Test Solutions. “You know why? Because testing is knowing!”

Precision Test Solutions’ test facility has existed in some form since 1963. The lab was founded by a Massachusetts company looking to become involved in the booming space industry. Orlando was chosen because of the proximity to Cape Canaveral and eventually the lab was able to build a reputation as one of the premier facilities in the United States for the testing of high-reliability components for military and space electronics. It became part of Tektronix in 2009 before being sold in 2013 and now operates as a private entity known as Precision Test Solutions.

The company conducts hundreds of thousands of tests each year on thousands of products, mainly components found on circuit cards. Those components become vital parts in Boeing 700-series airplanes, Atlas and Delta rockets used to deliver objects into orbit, the International Space Station, and GPS satellites, to name a few. Further, the company tested parts for the NASA Space Shuttle program before it was retired in 2011.

“Some of these tests will simulate the worst conditions that can be encountered terrestrially – or extra terrestrially,” says Carlton Chin, a senior test applications engineer, who has been with the company for 35 years.

Precision Test Solutions undertakes three main types of assessments: electrical testing, in which components or products must perform at temperature extremes; dynamic testing, which McEntee describes as a “shake, bake and spin” to determine durability; and assembly verification, also known as DPA, in which the product is dismantled to see if it was built correctly according to MIL-STD specifications. “It’s like an autopsy on electronic components,” Chin says.

An area of growth Precision Test Solutions has been involved in is testing and lot qualification of plastic encapsulated microcircuits (PEMs) for use in high-reliability circuits.  PEMs are replacing some ceramic-hermetic semiconductor components used in older and current generation avionics, satellites and military systems due to part obsolescence and cost — though PEMs were not designed for those applications. In those situations, Precision Test Solutions can provide testing to determine whether the retrofitted PEM component will hold up to real-world use.

Although most of the company’s competitors may focus on a subset of tests, Precision Test Solutions’ claim to fame is its ability to handle many of those assessments under one roof. When a customer’s need goes beyond the standard tests, the company’s consultants work to devise a unique test to fit the specifics of the product. Chin recalls a client that had problems with chip device solder joints on a circuit board fracturing and opening contact with the board. Precision Test Solutions was able to develop a test that flexed the boards under electrical test and measured how it impacted the component’s operation, an example of the collaborative engineering Precision Test Solutions can offer customers. “We bridge that gap between certainty and uncertainty,” McEntee says.

Consistency in testing is a key focus for Precision Test Solutions. Conducting the same test on different parts in the same way ensures repeatable and reliable results for the client. “MIL-STD testing requirements prevent you from doing an inadequate test on a poor product or an over-test on a good product, causing them to fail,” Chin says of the company’s methods.

Precision Test Solutions has achieved Defense Logistics Agency certification for MIL-STD test methods, allowing the company to take part in several military programs, such as missile launch systems, flight avionics and munitions delivery systems. With America’s deployment in overseas wars winding down and a push toward extending the life of existing military platforms, there are fewer new designs that require testing. As a result, the company is focusing more attention on the other segments of its business: commercial avionics, product qualification and the space industry.

With the space shuttle discontinued and future access to Russian-supplied rockets uncertain as international relations between the former U.S.S.R and Western nations have become strained, the need for American-made manned and unmanned delivery systems has increased. “That should result in some work around the area of lift vehicles,” McEntee says. There are also the technology developments coinciding with NASA’s planned mission to Mars, of which Precision Test Solutions is involved. The company’s expertise could someday be a critical part of reaching other worlds.

McEntee says Precision Test Solution’s goals mirror those of NASA and other space-oriented companies in the Orlando area. “Their success is ours,” he declares.