Service with a smile

The ambitious Prima Dental Group excels in international trade, which earned the dental tools manufacturer a second Queen’s Award for Enterprise. Having released its first range of CAD/CAM milling tools, the company is bidding for the major market share in the burgeoning digital dentistry segment 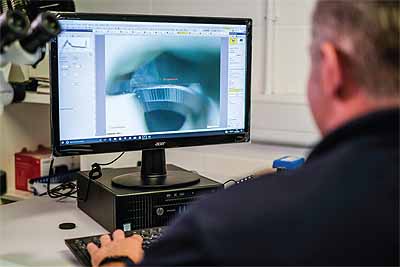 In my opinion, any business that has significant aspirations, must focus on “exporting,” says Prima Dental’s Managing Director, Richard Muller. A market-leading designer and manufacturer of dental drills and precision dental instruments, the Gloucester-based company has made highly successful inroads abroad in the past few years that have led to it being presented with a Queen’s Award for Enterprise in the International Trade category earlier this year. It was for a second time that Prima Dental won the most prestigious British business award after its triumph in 2014 in the same discipline.

“We have always been an export-led business and in the last five years, we have started manufacturing in Brazil and established a sales presence in countries like India, China, and Hong Kong,as we wish to move closer to the important markets of the future,” Richard discusses.“It is vital for us to stay close to the customers and respond to their changing requirements.We dedicate a lot of time to market research, as we are trying to develop the markets in the aforementioned countries.These projects are still in their infancy, but we are ambitious to grow them in the coming years.Today, Brazil is our base for export to South America, as the entire continent, as well as Asia, are developing very fast. Right now, however, it is the USA that remains our most popular market.”

Prima Dental first gained prominence across the Atlantic in 2006, when its Predator range of burs attracted the attention of the American market. Used to remove dental crowns, the bur also neatly removed the barriers to Prima Dental’s success in the USA and since it first appeared in the market, the company has enjoyed continued growth, which has resulted in the US market accounting for 50 per cent of business’ sales today.

Backed by its rich history that can be traced to the 1860s when Claudius Ash – the first manufacturer of false teeth in the world, set up his own business, Prima Dental has relied on Swiss technology in dental bur manufacturing ever since it was brought to the UK from the Alpine country in 1927.“In 1995 – the year when the company was acquired by its current private owners, the production machinery was ageing and the company was only 12th of 14 manufacturers of carbide burs in the world by volume.This had to change and in 1999, a radical restructuring plan was accepted by the owners and an investment programme in the best CNC machine tools was started,” Richard recalls.

“In 2005, we were the first to challenge the prevailing technology in the industry, by making the drills from a single piece of carbide rather than a welded steel and carbide construction,” he continues, pointing out that the innovation has resulted in Prima Dental products being widely accepted as the strongest and safest in the marketplace.

Together with the ongoing investment in state-of-the-art technology, Prima Dental has also made considerable improvements to its manufacturing space. The company opened its new purpose-built factory in late 2017, and Richard comments on some of the features it displays: “It boasts Manufacturing 4.0 properties, such as remote machine monitoring and diagnostics. We have also set up a purpose-built test and development lab and have created a fully air-conditioned manufacturing environment. Presently, we are developing a new training centre that will offer computer-simulated offline training.”

In what could turn out to be a game-changing venture for Prima Dental, the business launched its own digital dentistry division called Prima Digital. Following a £1 million investment and two years of exhaustive research and development, the company introduced Prima Digital’s first CAD/CAM milling tool that is said to outperform the competition by 29 per cent. Prima Dental appointed one of Europe’s most respected carbide tooling experts – Dr Marilyn Goh, as a Head of Research and Innovation, and her and her team have analysed the best possible carbide substrate and engineered a tooth geometry that increases tool life and precision of the mill.

“Digital dentistry is revolutionising the industry,” Richard enthuses. “We have invested heavily in research, which resulted in the launch of the innovative and patented range of dental milling tools for Roland machines. It is an area that has the potential to outgrow the current core business in the next five years, as it is an emerging technology and we are well-placed both in terms of skills and reputation to dominate this market worldwide.”

With the second half of 2018 just around the corner, Prima Dental is surging forward to ensure a strong end of the year. “Earlier in June, we signed a new contract, which will expand our sales and production by 30 per cent, meaning that we will be busy with new machine procurement by the end of 2018. Furthermore, we will be recruiting and training new staff for the delivery of another major project,” Richard reveals.

“We have a comprehensive five-year plan, which envisions a business three times the size of our 2018 turnover and we are well-positioned to achieve our goal. Brexit might be an issue in terms of staffing, as about 20 per cent of our workforce is European, but we are confident we can weather this particular storm. In general, the dentistry sector is growing due to the combination of an ageing population in the Western world and the emergence of a middle class in the developing countries, which fuels the demand for our products and services,” he concludes.