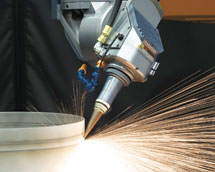 A lot has changed in the past 31 years for Prima Power Laserdyne, which, until April 2011, was known as PRIMA North America Inc.’s Laserdyne Systems Division. New markets, new customers, new leadership and a new parent corporation all have played a hand in the Champlin, Minn.-based company’s evolution. One thing that hasn’t changed, according to President Terry VanderWert, is its commitment to building quality, high-performance industrial laser systems for cutting, drilling and welding.

Laserdyne Corp. was founded in 1981 by Leigh Colby. “Leigh and I had set up a laser welding system back in 1976, when we had to buy a machine tool, a computer to control it, all the individual pieces and the optics, put it together and then develop the process,” VanderWert recalls.

“Through that experience, we said, ‘This was a lot of work to do for one machine. I bet there are a lot of people who would find value in having a company that could manage all the various technologies involved and put together standard laser systems.’ That was the premise of Laserdyne, and that is our premise today – standard industrial laser systems.”

Initially, Laserdyne did not have a market focus; it simply sold the product to anyone who needed an industrial laser system. The first machine was supplied to a company that needed the laser to cut plastic sheet. The second machine went to a manufacturer that needed to cut prototype laminations for generators.

Then, Laserdyne sold one of its machines to Pratt Whitney for a cutting application, which introduced the company to the aerospace industry. “As time went on, it became apparent that lasers in aerospace were a very good fit, so we got more involved in these applications,” VanderWert says.

Throughout its history, he notes, Laserdyne changed ownership several times. In 1982, the company was acquired by Data Card Corp. and sold to Lumonics Inc. five years later. Lumonics merged with GSI in 1999.

Italian industrial laser giant Prima Industrie saw the value Laserdyne brings to its customers and opted to acquire the company in 2001. Two years later, it was integrated into Prima North America Inc. as the Laserdyne Systems Division.

Through the reorganization of the Prima Group in 2011, the Laserdyne Systems Division was integrated within the Prima Power Division as Prima Power Laserdyne LLC. The company has continued to design, manufacture and market the LASERDYNE® brand of multiaxis (3-D) laser systems and started doing final assembly, installation, service and training of the RAPIDO, a multi-axis laser system designed by Prima Industrie for the trimming of hot-formed steel parts for the global automotive market.

“There is a growing demand for these types of machines in North America,” VanderWert notes. “It was a matter of capacity within the manufacturing facility in Italy, plus it gives us the ability to better support our customers locally based on the fact that we have intimate knowledge of the machines and are responsible for their quality.”

Prima Power Laserdyne abides by a comprehensive quality management system. The company is ISO 9001: 2008 certified by TÜV SUD. “We rely heavily on the quality of the components that come from our suppliers, so we’re taking our practices, which are based on Zero Defect Acceptance, and helping our suppliers apply this in their businesses,” VanderWert says.

“We make measurements at various stages along the process, and if there is a defect or discrepancy found, we will immediately go back and identify the root cause of the defect and implement a corrective action,” he continues. “We train the people – whether our own people or external suppliers – on what went wrong and how to avoid it happening in the future.”

Prima Power Laserdyne distinguishes itself from its competitors primarily through performance, VanderWert asserts. “Customers’ needs are constantly evolving, so it’s a moving target in terms of needing to innovate and provide new capability,” he says. “We’re constantly looking at what’s the next area of improvement or the next challenge that our customers have so we can respond to those.”

Prima Power Laserdyne’s products have changed significantly throughout the years to meet new requirements driven by the needs of its customers. For instance, the aerospace industry is striving to produce aircraft that have lower fuel consumption, fewer emissions and are quieter. Increasingly, aircraft engine components feature numerous small cooling holes, which require the use of a laser. One of the key goals for reducing fuel consumption and emissions is to produce holes that are more consistent in air flow. Laserdyne’s products of today include more sensors and adaptive control to achieve more consistent air flow.

“In automotive, there’s been a move toward lighter-weight – yet safe – vehicles, which has created demand for hot-formed, high-strength steels that are formed at a temperature of 900 degrees [Celsius],” VanderWert says. “When they are cooled, they cannot be cost effectively trimmed or punched by standard tools, so that’s created a demand for lasers. To be cost effective, we’ve had to make those machines for automotive much faster.”

One of Prima Power Laserdyne’s initiatives this year is to expand its reach to the medical device, electronics and fine mechanics manufacturing industries where there is a need for laser cutting, welding and drilling.

Prima Power Laserdyne intends to diversify to ensure it will celebrate many more years of success. “There are business cycles in every industry,” VanderWert notes.

“We’re trying to level out the business without having to succumb to the cycle of any given industry. We look at it as having three legs on a stool – aerospace, automotive and medical device/electronics applications, which have a lot in common.”

The company’s key challenge is finding new customers while staying close to existing customers in each market.

“We want to stay close to our existing customers in each sector of the market so we can provide innovative solutions to help them become more productive, whether it’s in terms of control or new application capabilities,” VanderWert says.

The innovative nature of Prima Power Laserdyne’s products is something that brings VanderWert and his employees a great deal of pride. “I think we’ve done very well in terms of taking technology and applying it so that our customers can be more productive,” he explains. “This is evident by the number of customers that are repeat buyers. The fact that they keep coming back to us is validation that we’ve helped them to be successful.”