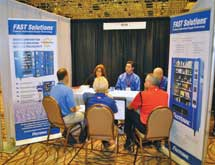 When Prime Advantage stepped onto the manufacturing scene 14 years ago, its group-buying approach helped small and mid-sized companies achieve savings and form relationships even the most veteran of these companies had never before seen. It’s not a manufacturer itself, but like an industry co-op, Prime Advantage’s insights and re­sources have become invaluable for its clients looking to save time and money while strengthening supplier relationships.

Group buying long has been prevalent in silo industries such as foodservice and healthcare, where companies know it brings purchasing clout and lowers their costs in specific purchased categories. Prime Advantage has taken this method and tailored it to the broader manufacturing industry to achieve maximum benefits on both the buying and supplier side.

And it all came from the head of Louise O’Sullivan, a former Groen employee who climbed the ranks to become president of the Dover Ind­ustries Co. subsidiary. When she reached the top, she took a look at the view and saw her company doling out rebates to their customers who were in buying groups. These customers were dealers – the middlemen who purchase in large volumes and sell to the end-users. But wouldn’t it be nice, she thought, if Groen could get those rebates, too? It turns out she wasn’t the only head of a manufacturing company who thought so because today Prime Advantage’s membership stands at more than 700 companies strong.

The way it works is Prime Advantage leverages the total spending power of its membership, which is comprised of small to mid-sized manufacturing firms, among a limited number of endorsed suppliers in categories such as raw materials and component parts, as well as indirect purchases such as maintenance, repair and operation (MRO) needs. Each category typically carries two to four suppliers, and based on this limited competition model, the suppliers have a greater chance of winning business from members within the group. The savings programs that endorsed suppliers offer to its members are based on group volume, and because of that, when suppliers win more business within the group, the members incrementally save more money. Both members and endorsed suppliers benefit from this model.

“The reason a member joins is because they see this as a partnership to where they will be better off in the group vs. out of the group,” explains Michael McDonald, vice president of new business relationships. “We have exceptionally strong suppliers in a lot of key categories that our members might buy from, and they can receive a rebate based on group volume or an upfront discount. Companies considering joining the group see this as an opportunity to reduce costs in a broad range of categories vs. trying to do it on their own.”

As for the participating suppliers, they get a Prime Advantage stamp of approval, following an audit process, and access to a wide and steady stream of small and midsize manufactures that collectively have the power of much larger companies. “For our endorsed suppliers, they view this as an opportunity to increase market share and get introduced to decision-makers more quickly,” McDonald asserts. “A big part of our job is to put the best buy and sell relationships together. We have more than700 members and 125 suppliers.”

When O’Sullivan founded the company, its target audience was food equipment manufacturers such as Groen. For the first few years, Prime Advantage zeroed in on and successfully saturated this market. Then, instead of settling for a comfortable plateau, it assessed its established supplier base and identified other manufacturing sectors that could benefit.

This cross-industry focus is what separates Prime Advantage from other traditional buying groups.

These members order their steel, metal and other components that go into their products, as well as their MRO needs, freight and office supplies directly from suppliers in the network. Members interact directly with endorsed suppliers; doing so under the Prime Advantage program. Members pay the suppliers through Prime Advantage vs. paying them directly.

The average member ranges in annual revenue from $15 million to $500 million. Depending on strategic needs, some will purchase from 10 to more than 40 suppliers. Since expanding into new markets, McDonald says its supplier list has grown along with membership. However, it is by no means a come-one, come-all process.

“Ninety percent of the time we get our suppliers through our members,” he says. “As we get into different markets or new members get comfortable, they may suggest a spend category we don’t have or perhaps we only have one supplier. We evaluate the total demand of that product or service within our group and determine if it is worth going after that or not.”

Even if a supplier shows mutual interest, it’s not a guaranteed in. The supplier goes through a three-phase auditing process. First, it has to perform a self-audit. Next, the nominating member audits the supplier, and Prime Advantage conducts a final general audit to evaluate the supplier’s price competitiveness, quality and risk mitigation systems. After that, the supplier submits a proposal of advantages and benefits it can offer. A supplier selection committee made up of purchasing managers from member companies gives the final yea or nay.

This process allows Prime Advantage to sift out suppliers who don’t meet its standards. It also spares its member companies the expense and time involved in qualifying their own suppliers. “This buying group is only as good as the suppliers we put in front of our members,” McDonald ex­plains. “We have to have best-in-class suppliers performing to a certain level of quality, or they wouldn’t be allowed in the group. [Members] have to reduce the risk in their supply chain … and our platform enables them to build a reliable source of suppliers.”

In many circumstances, a lower cost equates a lesser product, but Prime Advantage’s model manages to achieve just the opposite by offering easier access to hard-to-get deals, which is what Margaret Tue, purchasing manager of the Iowa-based Stellar Industries, discovered.

Stellar manufactures truck-mounted equipment such as cranes and hoists and joined Prime Advantage in 2005. “We are a relatively small company, so we were really looking for a program with buying power, one that would give us access to companies we may not have known about,” Tue says. By purchasing from just 10 endorsed suppliers, Stellar saved 5 to 10 percent that first year.

Cost savings wasn’t the only thing Stellar gained. “Our membership in Prime Advantage has enabled Stellar to pursue better pricing from suppliers than we could have attained by ourselves,” she says. “It also offers a forum for best practice discussions. The discussions that I have had a part in are just as valuable to our bottom line as the discounts and rebates that we receive.”

“There is a clear cost reduction based on our programs for direct and indirect goods, which is why people join,” McDonald says. “But there are added benefits that go along with membership. Back in 2000, we were mainly just focused on cost reduction, and we realized there are other needs we can probably address.”

Prime Advantage’s regional ac­c­ount managers serve as another set of eyes and ears within the supply chain landscape and schedule face-to-face meetings between members and suppliers. Also, though it carries several supplier categories, it doesn’t carry everything. This year, it partnered with Strategic Resource Management (SRM), a benchmarking firm to offer cost comparisons and identify savings opportunities for materials not available in the network. For example, Prime Advantage does not currently carry fiberglass suppliers, but will partner with members to help them find the best value for their dollar.

During these three-day events, Prime Advantage’s members and suppliers are able to meet with more people than in a typical six-month period.

“As a midsized company, we knew we had limited resources and expertise to devote to managing and en­hancing our supply chain, but also knew doing so was critical to our future success,” explains Bill Collins, general manager of Ultrafryer, a producer of commercial deep fryers since 1969.

“It takes anywhere from three to six months to meet with this many suppliers,” he continues. “To accomplish this within a three-day period has made my evaluation and selection process of suppliers much more efficient and has saved us a ton of money.” He estimates that Prime Advantage’s twice-yearly conferences save Ultrafryer $25,000 a year.

As Prime Advantage continues to bring on new members and suppliers, companies in the industrial metal consuming manufacturing sectors will not be the only ones to benefit from this resource.

McDonald’s department heads the company’s new member relationships, and he says Prime Advantage is in the early stages of expanding its presence in the food processing sectors, such as meat and dairy processing firms, as well as confectioners. Another market the company is monitoring for potential members is alternative energy.

“We’ve slowly become more of a holistic partner for total cost reduction and supplier enhancement instead of just a buying group,” McDonald explains.