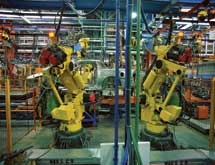 Even companies that have served the automotive industry for almost 40 years are feeling the effects of the automotive industry’s downturn during the recession. However, Prodomax Automation is not standing idly by and waiting for business in this sector to return to normal. Instead, Michael MacDonald says the Barrie, Ontario-based automated systems developer is seeking new markets to penetrate such as mining, solar photovoltaic and consumer products.

“Since we’re primarily automotive, we have been working to diversify into other non-automotive markets,” says MacDonald, Prodomax’s vice president of operations. “We’re able to look elsewhere through our automation and robotics strength and experience, not the product manufactured itself. Our strength would be in our process engineering, tool and design, and project management.”

Founded in 1971 and privately owned, the company operates out of a 150,000-square-foot facility in Barrie.

Prodomax Automation has seen a glut of old equipment come out of the coffers of its clients’ warehouses and commissioned once again as a result of the recession. As this trend continues, engineers used to designing machines using the most up-to-date technology available are learning antiquated processes to bring this equipment up to today’s standards.

“We’re seeing a lot of recycled materials or equipment that need to be integrated into a line,” MacDonald says. “These are older technologies that we had to relearn again – some of these are 10-plus years old.”

To make sure its employees fully understand these concepts, Prodomax Automation partners with its clients who have the expertise in these technologies. “Some of what we’re having to do is on-the-job or project training,” MacDonald says. “We bring in the manufacturers and customers as well to support us.”

For instance, MacDonald says the company recently completed a project using 14 to 15 robots on a small spot-welding line that a customer had bought off another manufacturer.

“These were older types of technologies, so we brought in some of the robot manufacturer reps to help us with the integration,” he says. “We’re dealing with the same issues in production, as well.”

Whether it is a refurbishing or turn­key project, Prodomax Automation is learning how to do more with less. MacDonald says while it awaits the return of the automotive industry’s robust position in the economy, it is operating under tight budgets with a trimmed down work force.

“As we go through those pains, we’re learning project by project and coming up with efficient ways to come up with solutions with reduced staff and reduced pricing,” he says. “We have placed a lot of focus on scheduling tools and management practices, as well as designs for manufacturability reviews.”

That doesn’t mean customer ex­pectations for on-time delivery and quality assurance have dwindled. In fact, MacDonald says customers demand more for less money, and meeting those lofty goals is difficult.

“Expectations have remained high, and they are far tighter than they used to be,” he says. “That is the new norm, and I don’t see that changing going forward. We’re becoming very skilled at compressed project execution.”

Prodomax Automation has met these new demands by taking its timelines and applying just-in-time methodologies to its custom machine build practices, which are different than a normal production environment. This involves carefully planning material procurement at precise times and defining the work packages.

“We need a significant amount of time to buy materials and commence machine builds to break down a project to smaller chunks, to try to gain on the timeline when scheduling techniques and our materials management,” he says. “Lastly would be the old-fashioned shift work overtime and expedited labor applications.”

Prodomax Automation is getting the hang of it. Recently, the company completed a large-scale project in 30 weeks that just two years ago would have required 45 to 50 weeks to deliver.

“The management put in the effort to be able to pull out that much time from a project, and risk mitigation strategies in play were tested unlike ever before,” MacDonald says. “The job was successful in the sense that we shipped the line to the customers after a very aggressive project management approach.”