Back to Profile Gallery > Productos Cave 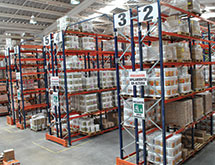 Founded in 1990, Products Cave S.A. can be described almost literally as a well-oiled machine. The Chile-based company produces highly specialized materials for the construction industry. Its 6,800- square-meter production plant, located in Santiago, has the capability to produce 900 tons during each turn of production. It also has its own distribution centers with a 2,000-square-meter warehouse and an external distribution center for storing solvent-based products.

The Cave brand is already recognized throughout the country, and the company continues to grow in sales. General Manager Guillermo Mattas comments that “the preference and constant support from clients is what has made the company a leader in its market. It is founded on the principles of continuous research and development of new technologies which allow Cave to offer a large variety of high performance products.”

At this time, the Santiago distribution center is the only point of sales location conducted by Cave. In other regions, the company relies on outside distribution centers that handle its stock to manage its sales. “All of our business is channeled through distributors or direct sales,” the general manager, who recently celebrated his tenth anniversary with the company, explains. “We ship through a network of external transport. In the case of distributors, we have more than 300 point of sales with a national level of stock.”

Dealing mainly with construction, reparation, infrastructure, and home improvement, Cave prides itself on its versatility and ability to adapt to changes in the market.  With the support of RPM and Euclid, it is able to stay current and offer a full portfolio of products to respond to fluctuating demands.  In addition, the backing of the other two companies allows the Cave brand to have a presence throughout all of Chile.

Cave sells to mainly three types of clients: construction companies, individuals (through retail) and contractors. No matter how much the market changes, one thing remains the same – the purchase of construction materials is a major step, and a complex one; a wrong choice or a shortcut here, could ruin the whole project. “For all our clients, the most important thing with these types of products is the technical component,” Mattas notes. “Our products are not sold in mass amounts, and are less impulsive buys. They are products that are used for solving problems or for preventing them. For that reason their use is very specific and should be installed by someone who understands the technology.”

Not only is the purchase of fine materials vital, proper use is as important as well. “A product can be good, but if it isn’t used the right way, it can be a total failure,” Mattas explains. “I always compare it to a doctor’s visit. He knows exactly what medicine you should take to cure any ailment. If you medicate yourself, or worse, don’t take the specified medication, the most probable thing is that, aside from not curing your sickness, you’ll generate adverse effects.” According to the general manager, the label “quality” includes the act of purchasers following through with Cave’s recommendations.

Cave’s plan for the future is to continue its strong growth it has perpetuated since the beginning. According to Mattas, this year, amid the low activity in Chile’s construction industry and the unsettlement of the economy – in which indicators are low – his company is leading the market’s growth with an increase of 23 percent. “This has been possible because we have been able to predict the instability of a few of the business segments in which we participate, but at the same time, we have used the platform that gives us some of the companies from RPM’s world,” Mattas states. “We have looked at and searched for innovation, which has been well-received in the local market, increasing participation, and at the same time, allowing us to assure the growth of our business.” This year, the company is expecting to sell $15.6 million.

Mattas also notes that the company has always harnessed a desire to grow, and has never stopped working toward that goal. In fact, since being acquired by RPM six years ago, Cave has quintupled its income. At that time, the company was bringing in 3 million dollars. It was the fifth largest participant in the market; today it’s the second. “We believe that especially in times of crisis, the moment is key for innovating and we believe we know how to do this, in addition to having the important support of RPM,” Mattas says.