Back to Profile Gallery > PTC UK

Creating a smart connected product from the beginning

In his keynote at LiveWorx17, PTC CEO Jim Heppelmann demonstrated how close physical objects and their digital twins have become. IoT is the next generation of Product Lifecycle Management (PLM).

IoT brings data from the physical to the digital. Augumented reality brings digital information back to the physical, through the perception and resulting decisions of human beings. CAD and PLM are the matchmakers who keep those two realms together.

However, this only makes sense when you get down to physical reality on the shop floor. How does IoT fit into the product lifecycle of a real product? Jim demonstrated how, by showing how a connected product enables its own redesign, helps define a new market segment, and becomes a connection between manufacturer and customer.

Bosch Rexroth, a PTC customer, recently introduced its CytroPac, a plug-and-run network-enabled HPU that operates under a wide range of conditions. In a live demo, Jim walked through how the CytroPac demonstrates that IoT is the next generation of PLM. 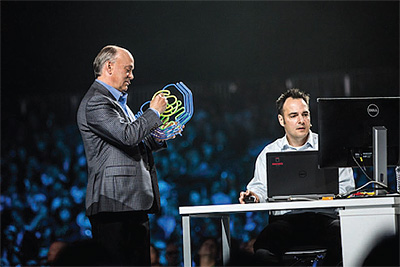 Using PTC’s 3D CAD software Creo for the original design, Rexroth engineers were able to package the motor, tank, cooling system, and control system into a compact design that met with customer approval. They proofed it out in a digital mockup in Creo and Windchill, PTC’s PLM software.

A smart connected product from the start
The CytroPac was engineered to be a smart connected product from the ground up, with connectivity from the edge all the way to the cloud. Bosch Rexroth’s digital organisation created an app that plugs into ThingWorx Navigate, which provides an intuitive interface to product data and shows what’s happening with CytroPacs as they are used in the field. The design engineers had never had access to this type of data before.

The designers were surprised to find this particular usage profile, which pushed the device operation outside of expected parameters. This could be a problem for these particular customers, but also represents an opportunity to optimise CytroPac to function reliably for this potential new market segment. How would the design need to be tweaked to meet this new requirement? Determining necessary changes

The design engineers went to ThingWorx Marketplace and found Kalypso’s value analytics app. Through this app the design team was able to use machine learning prediction from ThingWorx and a physics-based simulation from Mathworks’ Simulink. This gave them two different techniques to determine improvements that would have to be made to CytroPac to accommodate the new usage profile.

Using a model-based digital twin, they modeled how different levels of cooling efficiency would affect performance under those same conditions. The two types of analysis agreed that the efficiency increase would need to be at least 30 per cent for adequate performance.

Changing the design
But this requirement provided a real challenge to engineering. How could they stay within the packaging limits while increasing the cooling efficiency by that amount?

The CytroPac is cooled by a plate with three bent water-carrying steel tubes cast into it. The cooling is limited by the manufacturing process. If the tubes are bent too sharply, they buckle.

Engineering performed a thermal analysis of the cooling plate using Creo Simulate, and discovered that they would not be able to extract more heat using the existing design. Would they need to redesign the entire HPU?

They decided that additive 3D printing could overcome some of the manufacturing constraints. There are three main heat sources in the CytroPac unit. The engineers did a rapid prototype of a new cooling path that covered all. No traditional manufacturing process could accomplish this, but 3D printing could. Additive manufacturing also allows for lattice structures that could never be cast. The latest iteration of Creo, Creo 4.0, has a specific feature for designing such lattices, which maintains structural integrity at a much lower weight.

A side by side thermal analysis showed they could achieve a 43 per cent increase in cooling efficiency at a weight two thirds lighter than the original. A new market segment could be served.

Co-ordinating sales, support, and service
Product development is not the only place to capitalise on physical/digital convergence. It also plays a role in sales and customer support. A recommendation engine based on usage, customer and sales data from Salesforce uses machine learning to optimise upsell and cross-sell opportunities, as well as determining which customers might best benefit from a power-as-a-service model.

ThingWorx Studio can link this information to the actual device in front of the field service worker through a virtual human machine interface that can display all relevant product functions. Increasingly there is no need to build gauges and screens into the product itself. A customisable dashboard on a phone or tablet, or, increasingly, augmented reality goggles, can display all needed device status data.

End to end, IoT is PLM
For the first time, the product lifecycle is completely visible, from initial design, through production, distribution, use, maintenance, modification, and replacement. The LiveWorx17 demonstration with Bosch Rexroth’s CytroPac is just one example.