Back to Profile Gallery > Rapid Displays 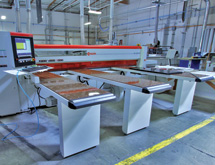 Rapid Displays has no room for mistakes, Chairman Earl Abramson says. “In this business, there isn’t time to do something over,” he says. “You must have the systems and the procedures to make sure that what goes into the box is absolutely perfect.”

Based in Chicago, the company manufactures permanent, semi-permanent, temporary and interactive displays for clients that include Sephora, Sears, Columbia, Anheuser-Busch Cos. LLC and Target. Abramson’s father and grandmother, Jules Abramson and Esther Sanders, founded Rapid Displays in 1938.

At first, the company manufactured easel, cardboard counter displays that “were pretty simplistic, with not much design,” Earl Abramson admits. Today, he says, Rapid Displays’ business has changed, and it manufactures more complex products, including displays with plastic foam-core.

Doug Cook, who is the president of Rapid Displays’ west coast operations, adds that the company also has had to acquire new equipment to adjust. For example, the company has invested in equipment that allows it to serve clients with digital printing and acrylic work.

“We purchased four CNC routers [and lasers],” he says, adding that it also purchased powder coating and polishing equipment. “We had to diversify.”

Rapid Displays’ business has changed, but the firm remains committed to keeping its promises, Vice President of Sales and Marketing Brian McCormick says. “That means things like shipping on time, regardless of what it takes to get the job done,” he says.

The company stays efficient in its work, McCormick says, by controlling the production process as much as possible. For instance, Rapid Displays has its own die-shop and designs its own packaging.

“Most of our competitors don’t,” he says, noting that the company does all of its own assembly in-house. “We don’t have to rely on a third party to do that. We have a pretty adjustable workforce so that we can add incredible capacity [to the workload] at a moment’s notice without disrupting the organization.”

Cook agrees. “[The company] has very much a can-do culture and is very high in integrity,” he says.

For instance, if one of Rapid Displays’ clients needs 10 weeks of work done in four, “We will move heaven and earth to do it,” he says, adding that the firm is assisted by its network of vendors. “We tend to do whatever it is we have to do and work the hours to be successful.”

Quality control is a hallmark of Rapid Displays’ manufacturing operations, which use homegrown methods, CEO David Abramson says. “They’re based on trials and tribulations of the past,” he says.

Continuously, the company revisits them in pursuit of improvements. “As the business evolves, we have to change those procedures to address what we do today,” he says. “We have to add more touch points as the business becomes more complex.”

For instance, Rapid Displays inspects all incoming purchases and inspects as it assembles displays on its manufacturing lines. Additionally, the company randomly checks its products after they are packed.

“We unpack them and make sure all parts in the carton are assembled appropriately,” Earl Abramson says. “If we find something that wasn’t as it was supposed to be, we check every carton before it.”

Rapid Displays also works closely with suppliers, Abramson says. “We are firm believers that we can only produce [when] our suppliers provide us with what we need for us to meet the in-store dates,” he says.

Before it hires its suppliers, the company carefully screens them. “They don’t just become a certified supplier,” he says. “They have to earn it. Nobody’s here just because they know somebody.”

If, however, someone were to make a mistake in the process, Rapid Displays’ first action is to not to determine whose fault it was. Instead, “The first step is correcting it,” he says. “Finger-pointing is not the solution.”

Meeting in-store dates is absolutely essential for the company, Abramson asserts. “It ties in with the advertisers’ media work that they’re doing on television and we have to be at the point of purchase at the appropriate time,” he says. “It has to be what they’re expecting.”

This year, Rapid Displays is celebrating its 75th year. As it looks towards the future, it will need to continue evolving, Earl Abramson says.

While the display industry was not a largely technological one when the company started, “We sure as hell are today,” he declares.

“We’re going to have to know how to advance with this technology or [somebody will replace us].”

David Abramson agrees. “We will continue to evolve our model, and continue to recognize what new offerings may give us a point of difference with our clients,” he says.

McCormick adds that he sees other opportunities for the company to grow, since some competitors have not invested in themselves.

“[In] these more difficult economic times, they have become weaker,” he says. “There’s opportunities for us to seize upon that and make our market share even greater.”