Back to Profile Gallery > Rembrandt Foods 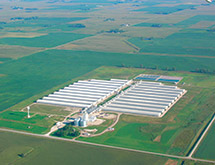 Dave Rettig and his father, Darrel Rettig, started Rembrandt Foods 15 years ago, more than a decade after the younger Rettig developed the business plan for the egg production business. “It took 10 years to find an investor,” Rettig says.

Rettig met Taylor through a friend, Mike Gidley. “Mike grew up in northwest Iowa and was aware that Glen Taylor owned land in the area,” Rettig  recalls. “He wrote Glen a letter saying he had some friends who had a plan to start an egg business. After we put Rembrandt together, Mike and I became the first two employees.”

Rettig says his motivation to start Rembrandt Foods was threefold. “First, my family had always been in the egg business,” he says. “My grandfather had retired, my father had been bought out and was looking for re-entry into the egg business. Second, the motivation was to have an ownership position in an entrepreneurial business.

“Third, when I looked at the opportunities, it was apparent that the foodservice segment of the egg business was growing extremely fast, and egg processors needed integrated egg production and processing solutions that gave them the freshest eggs possible to offer to their customers.”

Taylor liked Rettig’s proposal and ultimately invested in the company, a vertically integrated egg operation on 160 acres of Taylor-owned land near Rembrandt, a small community in northwestern Iowa. The company started as an egg supplier before expanding to a manufacturer of egg products eight years later.

The company does not supply eggs to grocery stores. Rather, it produces more than 200 egg products for the food industry and distributes to 30 countries.

The egg products Rembrandt sells are used in myriad food categories, including mayonnaise and sauces, baked goods, confections, pasta and noodles, nutritional beverages and bars, and prepared foods, Rettig explains. Products include liquid, dried and frozen eggs as well as hard-cooked and precooked egg products and no- or reduced-cholesterol eggs.

Rettig points out that although people consider eggs as a breakfast food, they have a much wider variety of applications, including emulsification, whipping and foaming, flavoring, crystallization control, protein enrichment, thickening, and binding and gelling, as well as browning and coating other foods.

Rembrandt Foods has grown significantly since its inception, but the company’s  core culture and values have not changed. “We follow our principles which we’ve had from the beginning,” Rettig says. For example, the company strives to use low-cost grain, employ vertical integration and scale to optimize its various products.

Additionally, the company has developed a live-responsibly initiative, a business model focused on efficiency and input reduction designed to enhance the quality of life for farmers and society as a whole. Rembrandt buys grains and soybeans from local farmers, and the company mills its own feed. Day-old chicks are purchased from a local hatchery, and eggs are broken in an on-site facility the day they are laid. Eggs are pasteurized and processed within a few hours. All byproducts are returned as fertilizer to the company’s farming partners, Rettig says.

Rembrandt employs strict quality assurance standards throughout its operation, including bio-security procedures at all of its locations and labs for product testing. Additionally, egg products are inspected by an onsite USDA inspector and the company follows good manufacturing practices to protect consumers from food borne illnesses.

Rembrandt adheres to welfare goals and principles that are essential for the humane care of the chicks. These involve appropriate feed, water, shelter, transportation and veterinary care.

Rettig’s focus for the company’s future is twofold. “My thing is working with key customers,” he says. “Secondly, where can we take this business over the next five years?” He believes the template for ongoing success is to continue to “do what we’re doing” while seeking opportunities for global expansion. “Eggs are the last great natural protein that can be exploited,” he says.