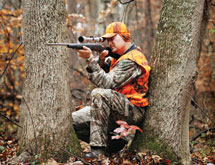 Remington Arms Co. COO Kevin Miniard spent many years in the automotive industry before joining the nation’s oldest firearms manufacturer, and in that time he learned a lot. He started his career working on the line at a Toyota plant in Kentucky, and within a few years he became one of the key people establishing the operations group for a new plant in Indiana, eventually running operations for Chrysler and several suppliers to the industry, as well. In that time, Miniard says he was witness to the remarkable operational changes that came out of Toyota and soon came to dominate the automotive industry.

“The automotive industry has obviously gone through a transformation,” Miniard says, referring specifically to the advancement of lean manufacturing principles.

Automakers around the world have used lean to streamline their operations and build cars more efficiently and more effectively than ever. Remington, founded in 1816, is one of the United States’ oldest continually operating manufacturers and has remained loyal to the same manufacturing processes and practices it has used for decades.

Under Miniard’s guidance, Remington has begun applying lean manufacturing principles to its operations, and while this transformation has just commenced, Miniard says the company is getting off to a great start. He says the company’s efforts with regard to lean manufacturing have already done a lot to improve the efficiency of its manufacturing. By rooting its efforts in customer satisfaction, Remington is ensuring its lean journey has a clear road ahead.

Miniard says Remington’s lean efforts are still in the early stages, but the company has a solid plan thanks in part to his automotive experience. Miniard says that experience taught him that it takes more to become an efficient organization than just focusing on what happens on the production floor.

“I learned at an early age that you can’t just implement lean in the manufacturing process,” he says. “It has to touch all facets of the company.”

Rather than concentrating only on the production floor, Remington is taking a more balanced approach. This includes the integration of designs for manufacturability, supply base development and a robust quality control system.

The company is bringing these functions together with a robust S&OP scheduling process – a process that ensures production of exactly what Remington customers want, when they want it. Through these initiatives, Miniard says, Remington is making lean a key priority in every aspect of the company’s operations.

“Lean principles are not fully realized if they are not applied across all areas,” says Miniard, adding that Remington’s inclusive design process incorporates these principles to good effect.

“This is why we involve our team early-on in the design process – including the supply chain,” Miniard says. “Our goal is to design in quality.”

The other fundamental piece of Remington’s lean foundation is its customers’ focus and satisfaction. If the company can’t find a customer benefit, Miniard says, it reconsiders.

“Every decision we make has the customer in mind,” he says. “Every action we take, asks the question, ‘How does this add value to our customer?’”

Another key component of Remington’s lean process is a heavy investment in infrastructure. Miniard says that while the automotive industry was on the cutting edge of technology as it implemented lean, the firearms industry has been much slower to adopt new equipment. This means the company has placed a greater emphasis on improving its infrastructure as it continues to focus on adopting lean philosophies.

“We make a lot of our products on proven, reliable but older machinery, so upgrading our capital and infrastructure is one of our biggest opportunities,” Miniard says, adding that CNC machinery is one example of the new technology Remington plans to utilize in its new processes.

Another aspect of Remington’s lean journey that sets it apart from other companies’ efforts is that it is a worker-driven effort, one that has involved direct input from the workers on the production floor from the very beginning.

Miniard says this input is very important because getting employees directly involved in the process improves buy-in and provides valuable insight.

“You have to start with the culture piece first,” he says, adding that working directly with employees is something Remington already believes in strongly.

“You will not find many meetings in our plants that happen in offices,” Miniard explains. “Our meetings happen out on the floor.”

Miniard credits Remington’s staff of qualified employees with much of the success of the company’s lean efforts, and says the company is fortunate to have a workforce that takes great pride in what it does.

“I’ve never seen a workforce more proud of their product,” Miniard says. “This is truly a group passionate about their work.”

On the Right Track

With the dedication of Remington’s employees, owners and management, the company’s lean journey is off to a good start, but Miniard knows there’s a lot of work left to do. He says Remington is dedicated to the idea of implementing lean throughout its organization and continuing to develop into a more efficient and effective manufacturer.

When the company’s lean journey  is completed, Miniard anticipates Remington will set a good example for the rest of the firearms industry as well as other industries. He says the company plans to leverage its experience as one of the nation’s longest-tenured companies and its adoption of lean principles into greater success in the future.

“We are taking the oldest manufacturer in the United States and applying lessons learned and best practices from all industries and applying them to Remington, all the while never losing sight of our tradition and who we are,” Miniard adds.