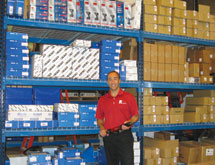 Dan Brooks and Leif Anderson started Rhino Assembly Corporation in July 2000 in Charlotte, NC. The company focused on providing technical products such as intelligent assembly tools, torque-measuring equipment, and ergonomic lift assists to assembly plants located throughout the southeastern United States. The first nine years of business provided steady growth for the company, but in 2009, when the economy took a turn for the worse, the company stumbled into a major roadblock and teetered on the brink of disaster. Rhino’s founders did not give up and now, three years later, they are projecting aggressive growth, and plan to extend their sales territories and double their workforce by 2016.

What prompted this radical turn of events? The company looked for new sales channels by going international, tapping one of the fastest-growing economies in the western hemisphere – Brazil. It also expanded its presence into the aerospace industry.

Nowadays, Brooks, who serves as president of Rhino Assembly, is full of contagious enthusiasm for his company, his employees and the state of the manufacturing business in America as a whole.

“We are seeing manufacturing levels on par with those we saw in the ’90s, when manufacturing was expanding here in the Southeast and companies were hiring,” Brooks says. “It is very exciting and we are very pleased to be a part of it.”

The Secret of Success

When asked about the secret of his success, Brooks has three basic ingredients: hard work, innovation and an exceptional group of employees. In fact, Brooks considers his employees more like part of his family. “Rhino is an exciting place to work and has a family type of atmosphere.”

What made the 2009 dip in business that much scarier for him and Anderson was putting its family of employees through such an ordeal. “We were concerned and became very focused on how we could keep our team together,” Anderson says.

The company was not only able to keep everyone, but Rhino has grown to 21 employees with plans to expand  its work force. This was possible through a mix of hard work, strategic planning and innovative ideas.

When the U.S. manufacturing sector came to a standstill, Rhino did not panic. Instead, the company looked into markets it had not explored and decided to place emphasis into the aerospace industry.

To be able to navigate international business, the company enlisted the assistance of the U.S. Department of Commerce and the Charlotte Export Assistance Center which helped them learn the ropes of the exporting business. In two years, Rhino’s revenue from its Brazilian venture went from $10,000 a year to $1 million, according to Anderson.

“We went over initially to develop relationships with new partners,” Brooks says. “But a lot of the day to day business is now done via Skype and phone. Everything moves rather smoothly as far as quoting, wire payments, and communications.”

Rhino’s clients in Brazil are similar to those in the United States – BMW, Mercedes, Honda, Nissan and all the Tier I and II manufacturers that are supplying transmissions, brakes and other automotive parts. The company also established a relationship with Embraer, one of the world’s largest aircraft manufacturers.

This international venture was noticed at the highest levels of the government and in March 2010, President Obama mentioned Rhino Assembly as an inspiration to other companies for what to do during times of economic difficulties. “Go out there into the world and sell American made products,” was the basic message of President Obama to American manufacturers looking for additional sources of revenue. After all, an increase in U.S. manufacturing and exports will create jobs here in America.

Looking at the Future

In October 2011, Rhino purchased KA Technologies, a Louisville, Ky.-based company with 20 years of experience in assembly tools, torque testing equipment, and a state-of-the-art service and repair center. With this acquisition, Rhino will add Kentucky, Indiana, Ohio and Illinois to its sales territory.

“We have hired three individuals this year,” Brooks says. “And we have plans to hire two more within the next six months.” The revenue growth projected from this acquisition will be $5 million this year, breaking the $14 million mark for the next fiscal year.

Brooks is prompt to point out how partnering with the right companies has promoted Rhino’s success, and he is not shy to give credit where credit is due. Partnering with Ergomatic has helped Rhino enjoy some very successful projects.

“We recently started working with a company in the material handling industry called Ergomatic,” he says. “They have been very responsive to our needs as far as quoting, staying on top of the projects, and delivering a product our customers like.”

Rhino Assembly prides itself also on being innovative, so it was very excited to partner with the company Desoutter in the aerospace industry. Desoutter provides a wide range of highly sophisticated tool solutions for a variety of industries, with a long history in the aerospace sector. “Desoutter is doing everything right,” Brooks explains. “Their advanced drilling technology is revolutionary. When we talk about the word innovative, this certainly qualifies: It is 50 percent lighter, yet produces more power than any competitive positive feed drill on the market.  This type of technology empowers our aerospace manufacturing customers to be more productive while improving the ergonomic environment for their workers.”

It is easy to get caught up in Brooks’ excitement for the future. “Based on the projects that we see coming from our customers over the next nine to 12 months, we certainly do not anticipate a slow down,” Brooks says. “We are very optimistic about what is happening with the manufacturing industry.”