Back to Profile Gallery > Robinson Industries 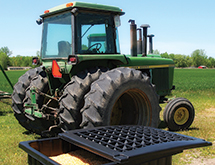 Ardis and Fred Robinson had more in mind than just profit when they started Robinson Industries in 1947. “They really wanted the company to be focused on community, family and charity,” says Ronda Robinson, the founders’ granddaughter and marketing manager of the Coleman, Mich.-based company.

The plastics products manufacturer has donated 10 percent of its profits to charities for more than 65 years. Recipients include church camps and other children’s-related charities as well as homeless shelters, a community center in Beaverton, Mich., and many more.

The company’s support of charitable organizations reflects its commitment to being a vital part of the community. “We’re located in a small, rural area, so we’ve always been committed to being local – we’ve stayed here, and didn’t move operations to China or Mexico when others did,” Robinson adds. “We’re proud of our staff’s dedication to our principles such as community, charity, family and customer service.”

In addition to its charity work, the company works closely with area schools to prepare the next generation of its workforce. Robinson Industries’ co-op and internship program as well as its involvement with local plastics organizations helps prepare students from Mid-Michigan Community College, Beaverton High School and other local colleges and high schools to enter the plastics industry.

Plastic products have been at the heart at Robinson Industries since its beginnings. Fred and Ardis Robinson formed the company after Fred left a position with the Dow Chemical Co., where he worked in the lab that developed Styrofoam. The Robinsons drew on this background for their first product, Styrofoam packaged as artificial snow for Christmas trees.

In the 1950s, Fred Robinson developed machinery to serve the then-emerging thermoformed plastics market. The rotary thermoforming machine is still used throughout the industry today.

The company’s capabilities continued to evolve during the 1960s and ’70s, when it began to thermoform reusable plastic pallets for the automotive industry and added a structural foam/injection molding department and twin sheet thermoforming to its repertoire. Plastic pallets are still one of the company’s core products, along with plastic shipping containers, custom designed industrial packaging and retail products. The company serves industries including automotive, agriculture, defense, marine, retail and textiles.

Much of the company’s work is customized to client needs. “We’ve had many of the same customers for 50 years, because they like working with us,” Ronda Robinson says. “We always make sure they’re satisfied with their products plus they appreciate the fact that we can control timing and costs since we handle every facet of their job in-house.” Indeed, Robinson Industries has their own engineering, prototyping, extrusion, manufacturing and recycling departments. Even the tooling is done at their sister company, Homestead Tool.

Robinson Industries’ manufacturing operations are ISO 14001 and ISO 9001 certified. In addition to quality initiatives, the company also implemented lean manufacturing methodologies during the 2008/09 recession. “Like many companies, we got very lean during the recession, but have kept many of those practices going so we can run more efficiently,” she adds. “I’m proud that we’ve survived the recession and become even stronger and more diversified in our operations since.”

Dedication to its community and customers’ needs are not the only common threads in Robinson Industries’ history. Co-founder Ardis Robinson is the first of what has become a line of female managers and owners at the company. “We’ve long been a predominately woman-owned business starting with my grandmother,” Ronda Robinson says. “We’re majority owned and run by women, even those not in our family, such as our thermoforming plant manager. We’ve always had women executives here, even back in 1947, when that was even less common than it is now.”

Robinson’s aunt, Inez Kaleto, is the CEO and chairman of the company, which has been certified by the Women’s Business Enterprise National Council as a woman-owned business. Robinson’s uncle, Bin Robinson, is the COO and president. There are four generations of family at the company.

Robinson herself has long been involved with the company, which she formally joined in 1981. Before assuming her current leadership position, she worked in the company’s sales department.

“I think it was [a] challenge when I was young and in sales, because manufacturing is such a male-dominated industry, but things have changed a lot since then,” she says. “Many women are coming out of college with engineering degrees and entering manufacturing and other technical fields.”