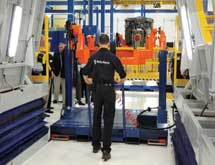 Rolls-Royce has added new wind under its wings. Plainfield, Ind.’s “focused factory” will produce LiftFans for the Joint Strike Fighter. A strong competitive strategy and a high-tech facility is what makes this Rolls-Royce factory stand-out. “Competitiveness is very important for Rolls-Royce,” Executive Vice President John Gallo says. “It’s a global market, it’s a global economy, and we need to compete in order to preserve jobs here in Indianapolis.”

The factory produces and assembles some of the most innovative and unique components of the next-generation, multinational, multipurpose military aircraft, the F35 Lightning II – also known as the Joint Strike Fighter (JSF). One of the features of the JSF is that it employs the shaft-driven LiftFan in combination with a vectoring rear exhaust nozzle to take off in short distances, accelerate to supersonic speeds in level flight and land vertically. Expected to be the largest military aircraft procurement in history, JSF is a joint, multinational acquisition program for the U.S. Air Force, Navy, Marine Corps and eight cooperative international nations.

“The LiftFan produces lift by directing thrust downward to overcome the weight of the aircraft and the earth’s gravity while the vane box directs the thrust for fore and aft control,” Gallo says. “The LiftFan generates a column of cool air that produces nearly 20,000 pounds of lifting power using variable inlet guide vanes to modulate the airflow.”

With the Rolls-Royce LiftSystem®, the F35 produces a total vertical lifting thrust of more than 40,000 pounds, almost 10,000 pounds more than the aircraft weight.

These LiftFans will equip aircrafts to take off and land efficiently. For instance, an aircraft with a LiftFan can be used to land vertically and take off with a very short roll – like in a desert like Iraq or Afghanistan, thus making certain operations easier, “so you don’t need a runway,” Gallo says.

Even with a LiftFan, an aircraft can still be fitted with missiles and warheads, he says. The F35 will be the world’s first operational supersonic short takeoff/vertical landing aircraft, which will affordably re­place the aging fleets of AV-8B Harriers and Sea Harriers for the U.S. Marine Corps and U.K. Royal Air Force and Royal Navy while also supporting existing and expanding requirements for the modern fighter. The factory in Plainfield is the only site in the world to assemble a LiftFan, Gallo says.

Rolls-Royce has been producing LiftFans since September 2009 and now has a production contract. The first LiftFan will leave the factory in October this year. At its peak – which will be in about 18 months – the factory can produce one lift fan a week.

Flexible work rules allow multiple responsibilities to be performed by all technicians, which makes the factory efficient and sets it apart from other Rolls-Royce factories.

Jess Heidenreich, who would be considered an assembler in any other Rolls-Royce factory, performs multiple roles at the focused factory. “I do parts balancing, assembling, kitting – I multitask,” Heidenreich says.

An electronic board, which hangs from the ceiling in the middle of the factory, shows where a worker is needed, what part of a machine has how many people working on it and how much of it is completed. This lets a person know where he or she is needed, and they can go ahead and assist in the completion of that task and every worker is always occupied, Gallo says. This work ethic puts the company at the head of the competition and lowering the cost of production by about 38 percent, he adds.

Overall control of the processes is managed by an electronic manufacturing execution system that provides visual aide and drives the assemblers through the build pro­cess, helping to ensure the LiftFan and vane box are assembled correctly.

Gallo says all of the assembly processes at the focused factory are ISO 14001-compliant. Even the final product cleaning uses soft dry ice for non-abrasive, non-flammable and non-conductive cleaning that won’t damage electrical or mechanical parts and is environmentally friendly.

“We’ve developed this cleaning technique to avoid using any solvents that impact the environment and are proud of this extremely green pro­cess,” he says.

Once the fans are built, they are tested at another Rolls-Royce facility just eight miles away from the new Plainfield factory, Gallo says.

The 37,000-square-foot factory in Plainfield cost $12 million, with $6 million coming from the federal government and Rolls-Royce supplying the balance. This factory is Rolls-Royce’s 11th in Indiana; it employs about 4,000 people in the state.

Rolls-Royce has served the defense industry since 1914. At the start of World War I, Rolls-Royce designed and produced its first aero engine – the Eagle – for the Allies.