Back to Profile Gallery > Rotuba Extruders 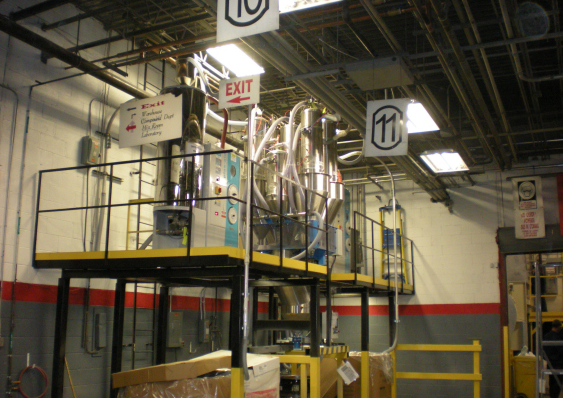 For a rapidly changing market such as LED lighting fixtures, being able to extrude a variety of products with subtly different plastic formulations without necessitating lengthy changeovers can be a crucial competitive advantage – one that Rotuba Extruders has developed and mastered.

LED lighting fixtures are proving as popular as flat-screen TVs were when they became affordable and significantly thinned out the number of boxy television sets worldwide. For LED lighting fixtures, the attraction is not only their brightness, but also their economy. They operate with little heat and use much less electricity than the fluorescent fixtures they are replacing.

An advantage of the LED – its brightness – can also be its downfall if its output is not filtered satisfactorily. The color of its light also can be fine-tuned by the device itself and by the lenses behind which it is placed.

For some of the lighting fixture OEMs Rotuba Extruders supplies, the challenge is to diffuse enough of the LED array’s brightness through the lens without becoming overpowering or revealing the LEDs behind the lens. Other OEMs don’t mind if the LEDs can be seen behind the lens and want their brightness. The color of the LED also has to be taken into consideration by the color and texture of the lens.

Some OEMs need different formulations of the plastic in the same type of lens for different customers. Before developing this capability, being able to turn a formulation into a different one on a dime during extrusion – which is a continuous process – was the holy grail for Rotuba. 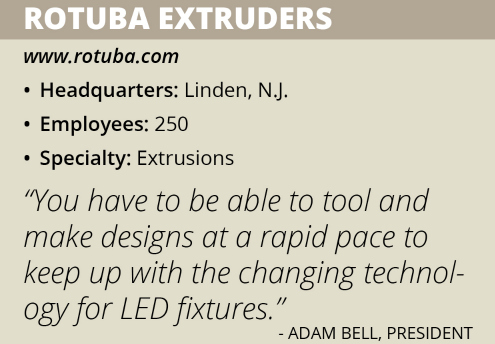 “We needed to custom-make individual formulations,” President Adam Bell explains. “You couldn’t just use the same formula for every single customer, and you had to be able to weigh these materials down to such small resolutions on the fly. You have to be able to dose it on the line as you are running ­– because it’s very expensive to make up all these batches – and you’re doing so many changeovers. But there was no technology on the market that allowed us to do that in such a quick fashion.”

Worldwide Search
Extrusion Department Manager Yohay Maymon led the quest for a method to put additives in a plastics mix to change a lens’ optics – its haziness, light transmission, color or diffusion – by minute particles, sometimes by as little as one-quarter of 1 percent.

He located a company in Israel that produced the needed type of machine for blending additives on extruding equipment. “We took their existing system and with their help we modified it,” Maymon says. “They used to have a system that you set once and it ran for days, batch after batch of the same mix of materials. They never dealt with a system where you needed to change the recipe in between batches. That was the biggest change to the system. You needed to modify some of the system, mainly the computer that controls everything. With their help and between both of us, we managed to get to the core of the system.”

Rotuba’s system utilizes seven additives in different combinations. “Sometimes we use one additive, or sometimes four all together,” Maymon explains. “We have a system that allows us to change the ratio of percentages of each additive. The variety and the range of product that we can gain is almost endless – you can go from one-quarter of a percent up to a 15 percent difference in a matter of seconds.”

The new system is completely accurate compared with the company’s previous method – premixing the plastic pellets and powdered additives in a barrel and pouring it into the extruder’s hopper. “Now the operators click on numbers and everything happens automatically,” Maymon says.

Three-Day Turnaround
The new mixing system combined with Rotuba Extruders’ full-metal machine shop means a customer can see its part on a Wednesday after Rotuba receives the part design on a Monday morning. “By Monday afternoon, we will have meetings about the design and have redesigned it for our customer, taking in what you would need to know about plastics,” Bell says.

“We could send them a 3-D printed model that they would receive Tuesday,” he continues. “They could see how it fits in their fixture, and if they approve that on Tuesday, we are vertically integrated. So we could cut the tooling in-house and be ready to run it on Wednesday. They could fly in on Wednesday and see their new design running in five different LED formulations.”

That is the kind of lightning-fast turnaround that customers require nowadays. “You have to be able to tool and make designs at a rapid pace to keep up with the changing technology for LED fixtures,” Bell emphasizes. “Those are really the two keys to why we’ve been able to be successful, giving the optics and the speed to market to all of our customers.”