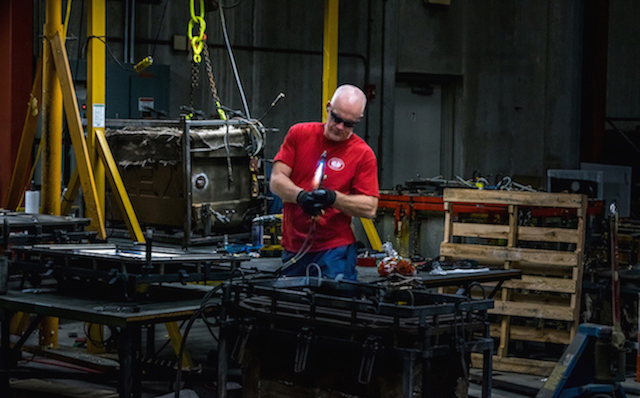 When lower quantities of large or complex plastic parts are required, the cost-effective and high-quality answer often is rotomolding. That technique has been mastered by Dutchland Plastics since 1967 and enabled the company to nearly double its revenue from 2013 to 2015 and to become one of the top 10 custom rotational molders in the United States.

“It’s a pretty exciting time,” CEO Clyde Swoger declares. “We manufacture a broad, almost a dizzying array of different products for our customers. We would consider ourselves a higher-volume rotational molder. We’re not really a job shop. We would tend to make things that are in modest to large quantities, at least for a rotomolder. Most of our products would be thousands of units a year or more, and some products would be in the tens of thousands of units.”

Dutchland Plastics manufactures parts as small as a shoe box and as large as a compact car. Although injection- and blow-molding can produce millions of parts a year, rotational molding produces approximately one part per hour per mold. “It’s a fairly slow process, but it can produce parts that couldn’t be made any other way – large parts with complex geometries and very uniform wall thicknesses. Particular characteristics that couldn’t be met in other processes can be met with rotational molding.”

Additionally, tooling costs for rotational molding can be in the tens of thousands of dollars rather than the hundreds of thousands that injection molds can cost. “The math tends to favor rotational molding for low- to medium-volume parts, and you also have to consider that we might manufacture a kayak out of one of our molds,” Swoger says. “You obviously could never do that out of an injection mold – it would never be large enough to accommodate the large-sized parts that we can make.”

Rotational molding works exactly as it sounds. A mold is filled with polyethylene or PVC resin, heated to between 400 and 600 F, and slowly rotated bi-axially. This causes the material to slowly melt and adhere to the walls of the mold. After the part is formed, its mold is removed from the oven and slowly cooled while it continues rotating with the part inside it. This achieves uniform wall thicknesses and the desired product characteristics. Part thickness is determined by the amount of plastic inserted into the mold. After being removed from the mold, a variety of secondary, finishing and assembly operations are performed as required.

Swoger compares the rotomolding machines his company uses to a carousel. “There are normally four arms on a molding machine, and each has two plates upon which molds are mounted,” he explains. “Those arms are either in an oven, a cooling station, a quenching station or a work station – where people are demolding parts, charging molds with resin or doing the mold preparation. Then they send that arm back to heat and go through the process again. Some of these machines are really enormous – more than 20 feet tall and 70 feet across. They are big pieces of equipment, and that gives us tremendous capability to make almost any plastic product up to 17 feet long and up to about 500 pounds.”

On any given day, Dutchland may manufacture as many as 200 different products, such as playground equipment, pool slides, industrial tanks, coolers, institutional furniture and floor care products. An additional capability is finishing parts.

“We have a customer in Washington state and we’re in Wisconsin,” Swoger notes. “We not only manufacture the complete kayak or canoe for them, but we will drop ship it to their dealers so they never have to touch this product. That allows us to service customers across the country rather than just in a local region. We do secondary processes and actually assemble most parts into finished products. We even provide warehousing and logistics services so that products can be shipped directly to the dealer or consumer. This range of capabilities is unmatched in the industry.” 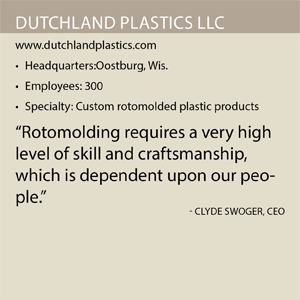 Another capability of Dutchland Plastics is adding soft or rigid foam to the inside of parts to provide rigidity or insulation. “We foam-fill nearly half of the parts that we manufacture, so it’s a tremendous capability that we have,” Swoger asserts. The company’s ability to manufacture parts out of PVC is less common in the industry. “It allows us to do things that others couldn’t do, like soft furniture or flexible parts for lawn and garden equipment,” Swoger maintains.

The carousel style of rotational molding machines enables mold changes to be made during a cycle. “We don’t have to stop the machine,” Swoger points out. “We are able to change molds without losing production. It’s all about having everything ready and having a very capable mold changer who can switch out that mold for another mold within a 15-minute window. While one part is being manufactured, he’s switching the mold on another.”

As with most production equipment, computer control has improved manufacturing and made it more accurate and sophisticated. “All of our machines are computer-controlled,” Swoger emphasizes. “Many of them are equipped with a feature called infrared thermometry, which allows us to control how long a part is kept in the oven or in the cooling station based on the temperature of the part rather than just the time. This is a great feature because it allows us to make much more consistent products.”

Dutchland Plastics now operates more with a process flow than as a job shop. “We have standard operating procedures for almost everything we do,” Swoger notes. The company has added new molding machines and trained its staff extensively, as well as improved visual management on the production floor. It also has applied lean principles to its manufacturing processes. “These are things that are really starting to have an impact on the performance of our business,” Swoger maintains.

Dutchland Plastics has a 170,000-square-foot main manufacturing facility at its headquarters in Oostburg, Wis., and a satellite facility in Sherrill, N.Y., that makes products for one customer located nearby. Such satellite facilities that locate near long-term customers – of whom Dutchland Plastics has quite a few – are a possible strategy for the company in the future.

“Most of our customers have been with us for 10 or more years,” Swoger says. “I think that speaks highly of what we’ve been doing. We have added a number of new customers over the last several years, but that is not at the expense of our more tenured customers.”

Dutchland prides itself on being a technological leader in the rotomolding industry. “We manufacture many products that few if any competitors would have the capability of producing,” Swoger asserts. “This has been recognized by the Association of Rotational Molders (ARM) which awarded Dutchland its Product of the Year and Conversion of the Year awards for 2014 and 2015.”

Dutchland Plastics’ family atmosphere will continue into the future, and Swoger attributes the company’s success to its employees. “About half of our employees have been here for more than 10 years,” he maintains. “We have a number of employees that have been here 30 years or longer and an incredible number of employees that are related to other employees. It is a very common situation where we have father and son, uncle and nephew or husband and wife working here. Currently about one-third of our employees are related to another employee. In my mind, that speaks volumes about what we are all about, because if you would recommend Dutchland Plastics to your son, daughter or spouse, it’s got to be a pretty good place to work.”

Swoger attributes the company’s success to those dedicated employees. “We are most proud of our people,” he says. “Dutchland’s motto is, ‘known by our products, powered by our people.’ Our people are the most important and valuable resource that the company has. Rotomolding requires a very high level of skill and craftsmanship, which is dependent upon our people. We’ve done a lot of things to help those people become more productive. That’s been the culture of the company for almost 50 years, and that culture is ingrained within the company.”