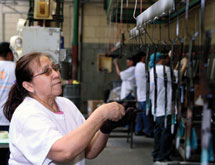 For 35 years, S&B Finishing Co. Inc. has enjoyed success by staying true to the age-old philosophy of treating its clients the way it would want to be treated. This way, President Kenny Spielman says, the firm earns customer loyalty.

“Ninety percent of our customers are repeat,” he explains. “As we’ve grown the company, we’ve added new customers, but the old ones are still living with us.”

Based in Chicago, S&B specializes in powder coating, liquid coating and multistep coating services that protect and preserve metal parts. Spielman cofounded the firm with his father, Ralph Spielman, in 1977.

However, the involvement of  the Spielman family in the industry goes back to the 1930s, when they produced paints and chemical coatings under the name Capital Chemical, which they sold in the 1970s.

Shortly afterward, when his father wanted to go back to work, Spielman purchased a finishing line from a lamp company, modified it to full automation, and started S&B. A decade later, the company moved to its current Chicago location.

Spielman has truly enjoyed the finishing industry for all these years, thanks to his staff at S&B. “We’ve all got a common goal,” he says. “When you have long-term customers, and long-term employees, it means you’re doing something right.”

The company celebrated its 35th anniversary on January 23. “There [were] some tough years,” Spielman admits. “But we all stuck through it together.”

Thanks to good wages and benefits, S&B has enjoyed a low employee turnover. While the majority of its long-term workers have at least 12 years with the company, S&B has four people who have been with it for 25 years. “As we grew, we kept the same people and added more,” Spielman says.

Throughout the years, S&B has managed to lower its turnaround time for products. When the company first started operations, it turned around products in seven days. Years later, it dropped that rate to five days.

Today, Spielman says, S&B usually turns around products in three days. “It takes a lot of planning on the customer’s part and our part,” he admits. “[My employees] have to make sure when they get an order that our inventory is checked out right away.”

He adds that S&B has an extensive quality program that includes a five-person team that is dedicated to quality control. The team conducts inspections on all customer parts during all facets of production – from arrival to finished delivery.

However, keeping an eye out for defective parts is not just the team’s responsibility. “All of the employees have been trained to look at parts,” he says. “It’s not one person’s job, it’s everybody’s job.”

S&B’s quality team also conducts a variety of tests, such as thickness, gloss and hardness tests, and randomly checks its drivers’ delivery times to see if they met or exceeded clients’ expectations. They use metrics to track the process, and their goal is 100 percent on-time deliveries.

S&B feels strong in the current economic climate, Spielman says, primarily because the industry is stable at present, with not many new competitors entering the market. “It creates opportunities,” he says.

He adds that the company grows its base by having salespeople call on old and/or inactive accounts. “We give them a 10-minute education of what we have to offer,” he explains. Sometimes, that’s all it takes to win a customer back.

Another place where potential customers can get that education is S&B’s new website, www.PowderCoat Chicago.com, which launched in 2012. Spielman is proud of this site because it is “representative of what we do,” he says, and it also reflects the changes the company has undergone.

Additionally, clients can use the site for estimates. “A customer can come to our website, choose a color and request a quote right there,” he says. “We’ve automated the process.”

Spielman predicts that S&B will not only continue evolving to meet customers’ needs, but also environmental regulations. His company has already implemented many green initiatives and is keen on the environment.

“We’re constantly updating equipment from a technical standpoint and an operational standpoint,” he says, noting that S&B uses energy-efficient curing ovens and lighting systems. When S&B opened its doors, it did 100 percent liquid coatings.  Today, its business is 85 percent powder, which has greatly eliminated hazardous air pollutants and volatile organic compounds.

Looking to the future, Spielman expects more success for S&B. He sees manufacturing jobs slowly coming back from China, which will increase his workload. And he enjoys the challenge of continually trying to improve S&B’s manufacturing practices. “Someday, we may have a two-day turnaround as an average.”