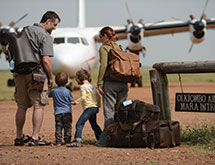 “We are hoping to be the model for how manufacturing should be,” Munson says. “I believe we can influence other factory owners.”

The Fort Worth, Texas-based company began out of necessity when Munson was teaching English in Mexico in 1999 and needed a durable bag to carry his books and supplies. Not being able to find a bag that fit his requirements, he designed a durable leather bag and found a local father/son manufacturer to make it for him. “Everywhere I went people were oohing and ahing and asking me about it,” he says.

As demand for his leather bag increased, Munson had eight more made in Mexico and took them to the United States where he sold them out of his car with a sheet of paper taped to the window that advertised “real cool leather bags for sale.” After selling all but one from his car in Portland, Ore., “I put the last bag on eBay and told my story in the listing and people went crazy for it.”

Because he continued to receive more requests for his leather bag, Munson and his black lab, Blue, moved back down to Juarez, Mexico in 2003 to make more bags. For three years, he slept on the floor with Blue and paid $100 in rent per month for an apartment with no hot water. “It was a drag, but all the money I saved I would send to the father/son manufacturers to make bags,” he says. “I was just tired of it in 2006. I had just met my wife and she lived in San Antonio, so I moved there and the business took off when I got my wife involved.”

Munson’s wife, Suzette, has a background in financial planning, which helped Munson rethink the way he was doing business. Today, Saddleback Leather sells briefcases, laptop cases, tablet and phone cases, backpacks, messenger bags and business accessories. About 85 percent of its customers are men and the company’s products are sold online only, but in spring 2015 the company plans to open a brick-and-mortar store in Fort Worth.

Saddleback Leather operates a manufacturing plant in Leon, Mexico where the manufacturing industry is growing fast. Munson says this is resulting in a tremendous amount of available work. Because of that, the company is hoping to become the more attractive option for local employees by incorporating the concept of social manufacturing into its plant.

Social manufacturing not only helps the company, but more importantly, it will make a real difference in the community. “I’m going to make it so it’s the standard to do social manufacturing,” Munson says. “Don’t pour all your money into yourself. Pour it back – and a good portion of it – into your people.”

Saddleback Leather earlier this month began offering its employees in Mexico classes on marriage, parenting and finance, along with one-on-one counseling. Additional services to be added soon include daycare and breastfeeding rooms. Eventually, Saddleback Leather will begin a community garden for its employees. “Our goal is for the president of the country to come in and tour our facility and say this is the new standard for factories in Mexico,” Munson says.

Old Mexico Manufacturing – the name of the plant in Mexico – is also in the planning stages with the same school where Munson was teaching when he had his first bag made. The school has agreed to open up a branch by the factory where its employees’ children can be taught English. “Their kids can get a four-year certificate in English that will lead them to getting into better schools and continuing on to high school,” Munson says. “That’s the idea – we want to pour into our people and if we are loyal to them they are loyal to us.”

Saddleback Leather is also active in Rwanda as it supports the Africa New Life Ministries. The company is developing a new program that will provide training to Rwandan men and women to make leather sandals for export to the United States.

The need for durable shoes in Rwanda is great because a majority of the shoes and sandals available come from China and are cheaply made – lasting maybe three weeks.  “Low-quality keeps poor people really poor,” Munson explains. “I’ve talked to a general in the military and the president is very much into quality and they would love to have quality boots for military/civil servants.”

The goal is to begin training Rwandans to make shoes and sandals by March 2015 and eventually employ hundreds of people in a new manufacturing facility. “This is part of setting a new standard,” Munson says. “I am going to sink money into this. We want to bring quality to Rwanda for the first time.”

Saddleback Leather also believes a factory doesn’t have to be dark, dirty and drab. In Fort Worth, the company is building a factory that offers the exact opposite of what most factories have today. “It doesn’t take much to have a nice, clean, enjoyable place to work,” Munson says. “We are planning to be the best factory in America. Whatever it takes, we will be the best.”