Back to Profile Gallery > Schwarze Industries 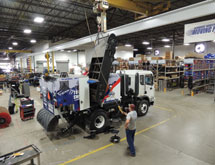 In business, as in sports, people always want to be measured against the best. In street sweeping, the ultimate test is in Edmonton, Alberta. A veritable World Series of street sweeping takes place there every spring as the city awakens from its winter accumulation of debris and dusts itself off to greet springtime.

It was there that Schwarze Industries traveled to test the updated M6 Avalanche mechanical sweeper against the meanest, dirtiest streets in North America. Like the hero of a Western gunfight, the M6 cleaned up.

“The curbs and gutters are completely buried in debris,” Adair describes. “Generally, they’re running machines in a parade to pick up the materials. There were more than 700 hours of sweeping completed with only five hours of downtime for some general maintenance. We had people that were just amazed with the product and performance of that machine. Not only did it have enormous uptime, but due to the performance level of the machine, much of the time it did not require another sweeper to follow behind it.”

The cleanup continues in Edmonton for two to three months. Schwarze Industries brought its latest mechanical street sweeper, the M6 Avalanche, to Edmonton to test the machine and obtain customer feedback. The company had sought out that feedback all through the development and manufacturing process, especially when planning for changes began in October 2012.

Extensive design and manufacturing improvements are responsible for the success of the M6 Avalanche. Approximately one-quarter of the components used in the previous M6 mechanical street sweeper were eliminated in the M6 Avalanche without sacrificing quality, which helped to speed assembly. Redesigning the manufacturing flow also was important.

“A year-and-a-half ago – when our new president came onboard with over 20 years in the auto industry – he hired in one of his top operations people from the auto industry,” recalls Greg Heyer, vice president of sales, marketing, customer service and product management. “They started with a white board, and they were basically doing stall builds. We had to get the flow right, so we changed the way that the production floor flows to increase our efficiencies and output.”

That included purchasing new production equipment. “We use a fully computerized press brake that not only tells the operator what tooling to use, it tells them where to place the tooling and shows it on a 3-D representation of the part,” Adair marvels. “It makes for a very quick setup. We don’t have to do hundreds of thousands of parts to justify a tooling change. We have quick tool changing and segmented dies.”

Among the processes Schwarze Industries performs at its 125,000-square-foot plant in Huntsville, Ala., are sheet metal rolling, forming, laser cutting, welding, machining, painting and final assembly. “We do all of the sweeper body here,” Adair says. “It’s more hand assembly, not really anything that’s automated. We just haven’t found that we have enough cookie-cutter redundancy of the same thing that justified automation.”

Laser cutting has reduced setup time. “With a laser system, you’re not having to do tooling or die changes for material thicknesses to get various clearances in your dies,” Adair explains. “You have one tool, which is your laser head, and you can hold tolerances all the way down from small holes to large parts. It gives you versatility, and the variables are pre-programmed in rather than having to take the time for tooling set-ups.” Welding is sped by the use of bulk tanks rather than individual ones for welding gas and state-of-the-art pulse welding machines.

The variety of products manufactured at the plant keeps the production flow varied. “We still do a very mixed flow, and we don’t do anything cookie-cutter,” Adair emphasizes. “The machines are very much made to specification. We do a one-piece flow through the shop. We try to take as much non-value-added movement out as possible. Through continuous improvement, employee empowerment and just-in-time manufacturing processes, we continually strive to be a lean operation.”

“They buy the chassis there locally, and then they complete the assembly process for Australia, New Zealand and many other countries,” Heyer says. “We do sell to all parts of the world. We have dealers and agents in 15 to 20 countries that we ship products to as we sell them. I would say we’re getting stronger in Mexico and South America. We’ve got some good growth opportunities in Asia as well.”

Besides the M6 Avalanche mechanical sweeper, Schwarze Industries manufactures regenerative air sweepers and vacuum sweepers for parking lots, industrial areas, malls and shopping centers, airport runways, milling and stormwater runoff control. The company says it has more parking lot and street sweeper models to choose from than any other manufacturer.

All Schwarze Industries products are designed and updated based on feedback from customers and dealers. “Whatever we decide to do has to come from the voice of the customer,” Heyer stresses.