Back to Profile Gallery > SIG SAUER 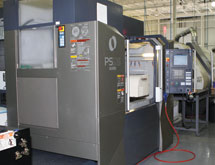 SIG SAUER may not have set out to prove a point when it began bringing manufacturing jobs back into the United States, but it has proved one nonetheless. For years, U.S. manufacturers have followed the logic that outsourcing manufacturing jobs was a necessary evil to stay competitive. However, SIG SAUER, a manufacturer of firearms for military, police force and consumer use, is proving the opposite. The company’s U.S. operations have grown 300 percent since 2007 and it will have nearly tripled its number of employees by the end of 2013 compared to 2007.

“I started here five years ago and I was the 286th employee to join the company,” explains Bud Fini, vice president of marketing. “We are going to hit 800 employees by the end of this year, and that will include jobs that were once outsourced that we are bringing back to the U.S. We are doing the opposite of many in the United States by showing that manufacturing can be successful and profitable in the United States if done correctly.”

The firearm industry in general is on a steep upward growth pattern, especially within the last two to three years. Consumer demand for self-protection has resulted in the strongest firearm market in U.S. history. SIG SAUER, which also has operations in Switzerland and Germany, has a history of innovation coupled with a well-orchestrated manufacturing operation that has put the company in a position to capture this growth.

SIG SAUER is recognized for regularly introducing new products and upgrading existing designs. The company will launch six new products in 2013 to keep up with current consumer demands. Before the boom in the industry, however, SIG SAUER consistently introduced a dozen new products each year to create its own market growth.

“We have the largest R&D and engineering force of all gun manufacturers in the United States by considerable margins,” Fini says. “We will introduce many products this year, but we still haven’t lost sight of the fact that bringing new products to the market is the way we’ve grown our share in the past. Once the market settles, we will continue with the same dedication to new product introduction and innovation that our company has become famous for over the last seven, eight years. We haven’t needed to launch that many products this year, but we are still capable and prepared to do so.”

SIG SAUER backs up its R&D team with a quality manufacturing process that can deliver on those innovative designs. It has three New Hampshire facilities. Two are machining centers and one is designated for shipping, receiving, assembly and warehousing, as well as administrative duties. Three years ago, SIG SAUER’s new plant manager reorganized the plants to achieve greater production.

“He brought new innovative production techniques that has allowed us to double our business in the last year-and-a-half,” Fini explains. “The way he organized our assembly line allows us to assemble more guns per person and with our machining line, we now manufacture more parts per machine.”

During the uptick of production, the ISO 9001-certified company has not forsaken quality. In fact, SIG SAUER has invested $70 million in the last four years on new equipment.

“We’ve invested in better equipment – new hi-tech machinery,” Fini says. “If someone toured our facility right now, they would find it hard to find a machine that is more than three years old. We have made huge investments in equipment to increase production and we have made major efforts to improve our quality. Right now, our returns are less than 1 percent of production, and that’s a huge improvement from where we were four years ago.”

SIG SAUER’s in-house manufacturing operation supports its quality control process. Some of its firearms are manufactured completely in-house and for those that aren’t, Fini says it works with proven suppliers such as Crimson Trace, which supplies the lasers used in SIG SAUER firearms. SIG SAUER and Crimson Trace have worked together for approximately 10 years and Fini says the company certainly meets SIG SAUER’s standards for its suppliers, which isn’t focused solely on price.

“Price is an important component with suppliers but it’s not the only one,” Fini affirms. “We look for quality from our suppliers – how many of their parts get rejected? Does it fit with our specifications? Is their quality so that we can do random inspections as opposed to 100 percent inspections? We want the highest quality for the best price. Quality means the part works as advertised, it requires no aftermarket work and it’s all within our specifications.”

Having its production, quality control and trustworthy suppliers in line will prove even more crucial as the company continues to increase market share and also enter new markets. SIG SAUER is not at liberty to say what those new markets are just yet, but Fini confirms that it is transitioning into new arenas.

“We want to continue to expand in the market we are in by being innovative, and that can mean new products or better ways to build existing products to get higher margins and invest back into the business,” Fini says. “We will also expand into new markets to make ourselves a more vertically integrated company. We are trying to grow our share of the business by being a very innovative company in firearms. Our growth will be the result of that.”