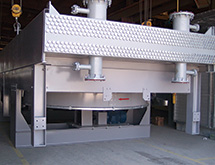 Smithco Engineering Inc.’s employees do their jobs every day with pride in their work, Vice President and General Manager Scott Edwards says. “The team members at Smithco are excited to be part of it,” he says. “We’ve created something where everyone is proud to have the Smithco badge on their shirt.”

Tulsa, Okla.-based Smithco designs, manufactures and supports custom-built, air-cooled heat exchangers for the refining and processing industries. Founder Orville Smith started the company out of his garage in 1952. “The money to build the first cooler came from Mrs. Smith’s sugar jar,” Edwards says.

Today, Smithco is a leader in its market segment, Edwards says. “We’re the strongest company technically out of all our direct competitors,” he declares. “We have the best automated front-end designed system in the industry.”

The company also has substantial engineering expertise, which partially comes from Hudson. “Drawing on those resources gives us a competitive advantage and resources that our competition doesn’t have,” he states.

This allows Smithco to focus on serving customers that expect products to meet industry standards as well as quick turnarounds on designs and product deliveries. The company manages this through its “flow business” model, Edwards says.

“We have a very automated system that initially designs the coolers, and we give the customer a rapid turnaround with the drawings and design information,” he says.

Smithco’s largest customer segment is the gas processing market, where its products are used in conjunction with fracking and drilling systems to help separate liquids. “Along with the natural gas coming out of the ground, there are additional valuable hydrocarbons,” he says.

“Those hydrocarbons are typically ethane, methane and propane,” he says. “Our largest customers use [our products] in systems to knock these liquids out of the natural gas.”

Smithco also focuses on other markets, which helps diversify its backlog, Edwards says. “We also focus on the power industry and the refining facilities, as well as petrochemicals,” he states.

Smithco maintains manufacturing quality by continuously investing in training. “Smithco must invest in the organization to take it to the next level,” Edwards says.

“Floor training continues from safety to welding techniques,” he adds.

The company also has partnered with Tulsa Technology Center, a local technical college for training. “The state of Oklahoma has a great program which supplements the training of our work staff,” he says.

One of the largest areas of its focus is safety, Edwards says. “We strive to create a workplace that is productive and safe,” he says. “Everyone plays a role with safety.”

The training has nurtured longevity in the company by making its employees proud of their work. “We have people that have been here over 40 years,” he says.

“As employees become more educated and knowledgeable about the product they produce, a sense of pride develops,” Edwards continues. “As pride in your job develops, it is reflected in quality and production.”

Smithco nurtures close relationships with its vendors, Edwards says. “It’s not a typical procurement [relationship],” he says, noting that the majority of the company’s primary suppliers visit its headquarters once a month.

“We invite them in and make sure they understand what we’re doing,” Edwards says. “We engage them with the shop staff and the supervisors, so they understand what they’re providing, what the timeline is going to be with that equipment, [and that we] rely on them heavily.”

Today, companies such as Airtech Products Inc. and The Unlaub Co. are aware of Smithco’s schedule and provide key support. Airtech, for example, “supplies louvers as demand requires,” he says. “Their customer support and interest in Smithco is second to none.”

Unlaub also provides several key components of Smithco’s heat exchangers. “Unlaub is able to package all components for an air-cooler, palletize the parts and shrink-wrap the assembly,” he says. “Everything is clearly labeled and delivered to our dock when we call for it.”

Thanks to these relationships, Smithco avoids stocking inventory and utilizes just-in-time services. “The concept is that nothing is going to sit around here too long,” Edwards says.

On the Lean Journey

Smithco has implemented lean manufacturing practices, which “is a project that has continuous development,” Edwards says, noting that it sets lean goals quarterly.

Each of Smithco’s departments holds kaizen events, where employees will identify a problem and brainstorm new ideas on how to manage them. Although some ideas have not proven successful, “We don’t penalize for attempts,” he asserts.

“Our team is always coming into it with new ideas,” Edwards says. “If you have a better way to skin the cat, [we’ll] give it a shot. It’s highly encouraged from the board all the way to the shop floor.”

Although the gas industry has matured, “Smithco has continued to perform well,” Edwards says.

“As the team continues to develop their abilities, they’ll go out and get more marketshare,” he adds. “We’ll also always need our suppliers, with the continual growth and improvements we make every month.”