Back to Profile Gallery > Snap-on Tools 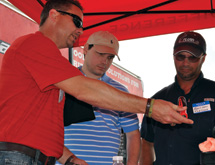 A brand as iconic as Snap-on doesn’t grow into a multinational tool and equipment manufacturer by relying on any one industry for profitability. Instead, it serves diverse customers, as seen in its recent big push into the energy and mining segments to grab additional marketshare.

“We’ve been selling into the energy sectors for a very long time, so what we’re trying to ramp up now is the number of products we offer in those markets,” President of Snap-on Industrial Andy Ginger says. “We’re penetrating each of those markets and going deeper than we ever have before.

“Oil is a place where ideas are growing rapidly,” Ginger adds. “Wind is growing and changing, as well, so we have to evolve with it.”

Snap-on carries more than 60,000 SKUs in its Industrial business unit that caters to customers in a variety of segments. Its products include ratchets, sockets, screwdrivers and power tools that are built to last in the conditions typically encountered in rugged settings.

In its Industrial business unit, Snap-on carries a number of specialty tools that apply to certain segments or across a select few. In some cases, it may have a few hundred specialty SKUs, and in other cases the number of segment specialty tools reaches as many as 10,000 SKUs. Just last year, Ginger says, Snap-on added almost 12,000 new items to its product lines.

For the oil and gas industry, Snap-on introduced about 600 new products in 2012 alone. Ginger says the new products included larger tools such as one-inch drives and larger striking wrenches. Many of the tools cater specifically to fracking companies and wind power firms.

For instance, Snap-on has designed a ratchet for wind power maintenance in frigid conditions. This ratchet allows technicians to open the top of a cell while wearing gloves in areas where temperatures can dip to as low as 20 F below zero.

“We have hundreds of products like that we’ve added every year,” Ginger says. “We carry many different categories of hand tools, power tools, diagnostics, personal protection and a broad range of other categories.”

When Snap-on penetrates a new industry, it makes sure customers know it will be around through the boom-and-bust cycles, according to Ginger. He says the customers need to realize they won’t be abandoned when times get tough, and at the same time, Snap-on can’t bank on any single business segment staying hot forever.

“First of all, what we’re trying to do is not be hot and cold,” Ginger says. “If you want customers to stay with you for life, you can’t get in and out of an industry. You have to get to a place where you’re very consistent when servicing the customer.”

Snap-on nurtures these relationships by allowing the marketplace to drive its R&D. Ginger says the company’s ideas for new products predominantly stem from its efforts to solve problems its customers present to its salesforce.

“One of the places we’re piloting Control Tech is on the [Alaska] North Slope, so we’re finding out what happens when our product comes into a cold-weather environment,” Ginger says.

No matter what the industry, however, Ginger says Snap-on’s  customers are very concerned about productivity in the workplace as well as in the field. One of Snap-on Tools’ roles for its clients is to help achieve the productivity they seek.

Another initiative Snap-on has launched to accommodate these needs is its line of tool control solutions. These days, customers seek tool control that can keep their operators from traveling too often to the tool crib and keeps their critical tools at point of use.

“That idea has evolved from a small business idea in a set of core industries to something that cuts across many different industries,” Ginger says. “When you’re helping people with asset management problems and consulting on challenges there, things go that way.”

When things go that way, as Ginger says, Snap-on finds itself growing alongside its customers. Since it has worked so well for the company since its days as Snap-on Wrench Co. in the 1920s, there’s no reason to change that in 2013.

“For Snap-on, we simply want to continue to grow and help our customers do the same,” Ginger says. “We believe that if we can partner with them closely, we can grow together.”