Back to Profile Gallery > Solar Atmospheres 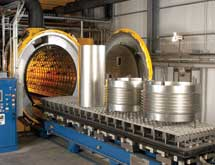 With plants in both Souderton and Hermitage, Pa., and another plant recently opened in Fontana, Calif., Solar Atmospheres is the largest commercial vacuum heat treating company in the United States. From heat treating to brazing and from carburizing to nitriding, the company processes thousands of pounds of metal daily and is home to the world’s largest commercial vacuum furnace.

CEO William R. Jones founded Solar Atmospheres in 1983 after spending several years as a manufacturer of vacuum furnace eq­uipment and founding Vacuum Fur­n­ace Systems. Today, the company serves sectors that require high-tech heat treating solutions for their products, such as the aerospace, electronics, defense and medical ind­ustries. For example, Solar is treating many of the components being used in the creation of the 787 airliner from Boeing, according to President Roger Jones.

“From its humble beginnings in a colonial blacksmith shop, the heat treating industry has progressed significantly to using ultra-modern computerized equipment,” Jones ex­plains.  The level of technical sophistication and quality management that Solar Atmospheres has under its roof is one of the main reasons the company has captured the highest market share in the Northeast Mid-Atlantic region. Jones says customers come to Solar Atmospheres because they trust that the company has the capabilities and the expertise to successfully meet their specific needs, even if the customer isn’t exactly sure what those needs are at first.

Having a full-fledged research and development department is highly unusual for a commercial heat treating company, and is a great value-added asset for customers of Solar Atmospheres. Solar’s Metallurgical Engineering Services group is comprised of not only metallurgists, but also project engineers and chemists. “When you think of heat treating, it’s not just metals, it’s materials and a lot of other aspects that we’re working with,” Jones explains. Further, Solar Atmospheres has an on-site, state-of-the-art metallurgical laboratory for analysis of heat-treated materials.

The company also offers its customers excellence in the form of its equipment. Solar Atmospheres uses furnaces designed and built by sister company Solar Manufacturing – an industry leader in furnace innovation and technology. Jones says customers know that when they send their components to Solar Atmos­pheres for heat treating, they are getting the most effective service possible. “Many of the components we work with are high-quality, high-cost parts that are used in the most demanding and critical applications, so having superior equipment is paramount,” Jones says. Examples of these applications include gas turbine engine blades, race car engine parts, biometallic medical implants and surgical instruments.

Like many companies serving the manufacturing sector, Solar Atmos­pheres has had to cope with some of the changes brought about by the global recession, specifically in the airline industry. Domestic airlines are investing less in new aircrafts. Jones notes that the market for the Boeing 787 is much stronger overseas than it is in the United States. However, that discouraging news is buoyed by Solar Atmospheres’ strength in other markets, such as the medical industry.

Jones says growth in the medical sector as well as the power generation sector look to keep Solar Atmospheres busy for a long time to come. “There’s a bright side and of course there’s a dark side, but it all tends to work out in the end,” he says.

In fact, Jones says the company has plans to open another plant somewhere in the United States within the next two years. He says logical homes for a new plant include the Midwest, where the company could more easily serve certain customers, and the Southeast, where a lot of manufacturers have recently migrated. “I see slow but steady growth, particularly in the next year or two as we pursue our goal of sustaining long-term growth and profitability,” Jones says.