Specially designed for use by those enjoying the natural splendour of the Nordic region, the recreational accommodation manufacturer Solifer Polar provides only the highest standards of quality, luxury and comfort 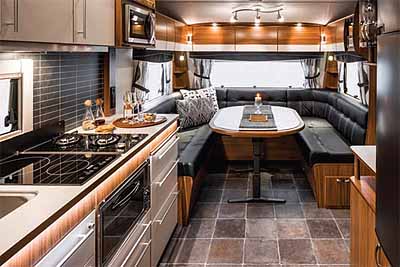 “The history behind the Solifer and Polar brands is remarkably similar,” explains Tony Ekstrom, Chief Executive Officer of Solifer Polar, creators of quality, comfortable recreational accommodation for more than half a century. “Both brands were founded in the mid 1960s, Solifer in Finland and Polar in Sweden, with the two coming together through a merger at the end of the 1980s. In 2003, Solifer’s production was transferred to Sweden, before moving to Germany in 2015. Meanwhile, production of Polar vehicles has remained in the locality of Dorotea, Sweden.”

The merger of the two brands brought with it a very complimentary partnership, with Polar recognised for creating a high-end, premium offering, designed specifically for the Nordic climate, and Solifer being specialists when it comes to more affordable vehicles and products. “The Polar brand has always been about quality and innovation,” Tony states. “These caravans and motorhomes have been designed and perfected for use during all seasons, creating a warm environment in the winter and an area of cool relief in the summer. This is possible as a result of a combination of thick insulation, a highlyengineered ventilation system and the passing of strict water tightness testing. One operator is responsible for completing the interior of each vehicle, while our self-developed electrical system provides the customer with a central control panel and the ability to control a variety of functions via a mobile phone app.”

Polar’s range of caravans extends from its 520 model, its smallest product with its most popular layout, to the 840. The largest and most luxurious caravan that the company sells, the 840 provides approximately 20 square metres of living space and is described as something of a ‘cottage caravan’.

Over the last few years the company has put a great deal of resource into the development of new solutions and schematics. In 2017, it introduced to the market the Polar 650, its largest, single-axle Polar caravan, which comes with the choice of seven different layouts. “The launch of the Polar 650 has been a fantastic success, particularly the 650BR model, which incorporates a children’s room, and the 650TR TDS,” Tony continues. “With the 650BR we have developed a very flexible bathroom with an integrated shower, similar to those present in our Grizzly motorhomes, and we are certainly seeing a trend in customers who are new to camping embracing caravans operating on a single axis.”

A trend that the company has also seen developing is an increase in demand for childfriendly caravans, which it has capitalised on with the launch of the popular Polar 650BR. Tony identifies this demand as being related to a new generation of campers who are introducing their own children to camping at a younger age. While motorhomes appear to remain the preferred option for couples, Polar caravans are the clear choice when it comes to families. 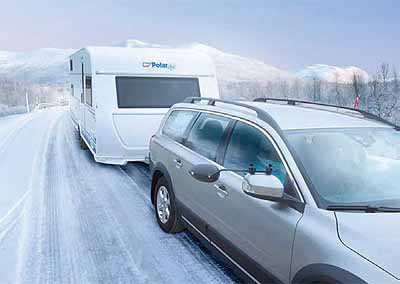 The aforementioned motorhomes offered by Polar come in the form of the Polar Kodiak and Polar Grizzly. A semi-integrated motorhome, the Polar Kodiak is equipped with ABS brakes, built on a Fiat/Alko twin axle chassis, and ample cargo space. Its interior comes with waterborne underfloor heating, the choice of two single or one double bed, a convertible seating area and a fully equipped kitchen. This comes complete with a four-ring hob, drop down shelves, curved glass cupboards and Polar’s exclusive Tec Tower, which houses a fridge, freezer and oven.

The little brother to the Polar Kodiak is the Polar Grizzly. While it has a single rear axle and cargo space tailored to a smaller model, it possesses most of the features of its big brother, including ABS brakes, underfloor heating and its kitchen appliances. Offering approximately 12.5 square metres of space, both the Grizzly and Kodiak models share company’s electrical system that allows complete control from a single display.

Whether a customer desires a Polar caravan or motorhome, what they can be assured of is the company’s complete commitment to the quality of the product throughout the full production lifestyle. “By manufacturing every part of our recreational accommodations, we are able to easily ensure its quality and guarantee peak performance,” Tony says. “This consistency of service is a huge selling point of the company. It also allows for the easier development of new features and this neverending curiosity to find new ways of doing things drives the company towards continued self-improvement.”

Business for Solifer Polar over the last 12 months has been considerably strong, with its order intake increasing by 65 per cent. “We have successfully boosted our presence and market share in Sweden, Norway and Denmark, while also making strong progress through resellers in the Netherlands, Belgium and Germany,” Tony concludes. “We are also benefitting from a movement in consumer attitudes towards products that can provide both high quality and a long-life span. Solifer Polar’s target now, and in the future, is not to just earn the highest share of the market, it is to make the best possible products that our customers will love, and we will continue to achieve this.”

Solifer Polar AB
Products: The manufacture of caravans and motorhomes