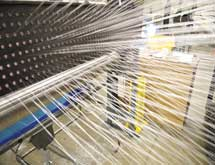 The textile industry that once thrived in the Mid-Atlantic region long has been considered a relic of America’s industrial past. U.S. manufacturers in this sector have laid off sizeable chunks of their personnel or shut their doors permanently as overseas textile producers made inroads with quality, lower-priced products.

Southern Weaving Co. was about to become another victim of globalization. Ron Mohling, a seasoned executive with many years of experience of growing businesses, was asked to serve on the board of directors for Southern Weaving. He recognized early on that there were great products to be made by a dedicated work force that merely needed some direction. Within five months, he was named CEO.

His first order of business was to develop a strategic plan that would allow Southern Weaving to compete in the 21st century. He and 20 to 25 existing employees determined that, to survive, Southern Weaving would have to move away from its commodity products and invent items that cost and quality-conscious customers could not purchase from overseas competitors.

“If we had conducted business as usual and if we hadn’t changed substantially, the company would have been out of business,” Mohling says. “There are several points in our strategy, and one is we really need to develop products with a clear point of differentiation.”

Southern Weaving has a long and storied history in the textiles industry. Founded in 1924 in Greenville, S.C., the company’s cotton webbings were used by the Ford Motor Co. in Model-Ts, and its “military tapes,” or webbing, helped the U.S. mission during World War II. The company now serves all of North America with its products and services out of facilities in Anderson and Greenville and Collingwood, Ontario, in Canada.

Mohling and the executive team at the helm of Southern Weaving are determined to keep the textile manufacturer viable. Mohling says the company culture had to change in order to make that happen.

“The culture of the company is changing and becoming more innovative,” he says. “People are excited about the change. There’s really good morale now, and everybody is involved in seeing us as a much more modern company instead of being in an over-the-hill industry.”

Along with an overall culture change, Southern Weaving is investing heavily in equipment upgrades and new technology. Mohling says the company has spent close to $3 million in the last two years. This helped bring more value-added services in-house and avoid outsourcing processes like coating.

“We’re trying to gain more control over the value-added chain while continuing to focus on excellence in operations,” Mohling says.

For example, Southern Weaving purchased one new twisting machine that replaces five old ones. This increased overall capacity for the production of its webbing and rope products.

“I don’t think any of the competition has a twister as modern as that one,” Mohling boasts.

The company is also focused on all aspects of “lean” manufacturing, especially quality and “on time” delivery.

Recently, Southern Weaving has seen a boost in sales of its tubular products for applications such as hydraulic hose protection. Sales of this category have grown significantly with help from global demand from heavy equipment manufacturers to overseas construction companies. According to Mohling, in this slow growing economy, certain industries are growing, like natural gas and domestic wind farms.

With double-digit sales growth, Southern Weaving has been one of only a few textile companies who can boast about adding jobs. Over the last year, the company has increased its workforce by 20 percent, with many of these jobs focused on new products.

With Southern Weaving now on solid footing, the company intends to continue growing. Mohling says sub-branding is a revenue stream Southern Weaving has not pursued in the past, and the company continues to look into strategic acquisitions to complement its current line of products and services.

“We want to control the value-added chain more than ever so we’re not forced to decrease our prices,” Mohling says. “Excellence in continuous improvement of our operations and leading the whole industry in quality are hot-button issues we’re thinking about every day.”