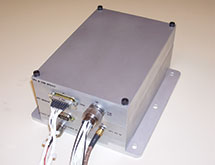 America’s space program has been a triumph of technology for decades. For every one of the thousands of components each rocket or space station carries, one or more companies are behind their design and manufacture, which require 100 percent reliability. This means that each system launched by a rocket – which Space Information Laboratories (SIL) founder and CEO Edmund Burke calls a “black box” – has to be tested extensively and “space-qualified.”

“You have to do thermal cycle and vacuum, random and sine vibration, shock and electromagnetic interference. radiative and conductive emission testing,” Burke stresses.

“You have to space-qualify four times higher than the actual level you are going to experience,” he adds. “It’s not easy to pass that. On launch, you have a stage 1 and stage 2 explosion that is like a bomb going off. Your black box may be 3 feet away, and the box has to survive that and keep working. Once it passes space qualification, then it is allowed to be placed on a rocket. If something happens, we’re not liable for that if the black box passes Department of Defense and/or NASA-accepted Space Qualification requirements.”

Among the many safeguards designed into space-qualified products are thicker printed circuit boards and underfilled field programmable gate arrays to withstand shock. “That’s what they do in cell phones,” Burke points out. “If you drop a cell phone on the ground, most of the time it keeps working. We do the same thing for a rocket.”

The thicker circuit boards are necessary to prevent bending. “If it bends too much, parts start popping off the board and fracturing,” Burke notes. “You have to do the finite element stuctural and vibration analysis at the board and box level. We have to design it to handle the shock. You don’t just throw stuff in a box and hope it works. You have to do all the engineering design analysis behind it. That is very costly.”

This level of design, manufacturing and test scrutiny are why it takes years to design new rockets. “When you space-qualify for rockets, it’s a couple-year process,” Burke emphasizes. “It’s a big deal. When you show up for the final qualification testing, it takes four to six months, and you have to pass everything. If a product fails one test, you have to go back.

“It takes months to redesign or work with the government to figure out how to make the product work,” Burke continues. “You’ve got to pass all these tests or your black box is not flown on a rocket. That’s what drives the cost, because humans have to do all this testing. It’s not the parts in the black box that drives the cost – it’s the extensive testing.”

When dealing with such sensitivite components, special manufacturing procedures must be observed. For example, electrostatic discharge (ESD) – static electricity – can damage sensitive electronic components. “When the technicians work on circuit boards, they have a wrist strap to dispel any discharge from their fingers,” Burke explains. “We have an ESD area with a yellow line on the floor, and when you cross it, you’re in an ESD area. Our floors are all normal industrial flooring, but there is no carpet and the workbenches are grounded.”

Space Information Laboratories tests its entire line of five products, which includes the Li-Ion Polymer Intelli-Pack Battery®; the VBITS GPS Tracking and Autonomous Flight Termination System; the MIL-STD CubeSat 6U/12U; the Satelllite Communication; and Intelli-Avionics® used on DoD, NASA and commerical programs. The electromagnetic interference conductive testing is necessary because the devices onboard a rocket are powered by batteries on the same DC electric power and ground lines. “You have to make it so your box can handle really bad noise on the DC lines because you’re integrating all these boxes together on the same ground line,” Burke explains. “If one box starts conducting noise on the ground line, all the boxes have that noise.”

The company has its own space environmental test equipment because the closest lab with such equipment is in Los Angeles, which is nearly three hours away. “We have our own test equipment here for production,” Burke says. “Every unit has to be thermal-cycled, random and sine vibration (one minute per XYZ axis), and functionally tested prior to delivery of production units. So that is all done in-house at Space Information Laboratories.”

Space Information Laboratories assembles its products using mostly manual methods. The company’s 15 employees include two assemblers. In the aerospace industry, 50 may be a large production run. “We don’t manufacture our own electronics,” Burke says. “Most of the parts we use are manufactured by printed circuit board (PCB) manufacturing companies, and SIL designs the PCB and the layout to be manufactured. We are selecting mainly industrial- and military-rated parts, and we’re integrating the final PCBs in a black box.”

The company designs Class 3 printed circuit boards, which are the highest standard. “Class 3 PCB manufacturing equipment has to be calibrated regularly,” Burke points out. “You do a cross-section of the board and see if there are any defects. Not many outfits really focus on the DoD and NASA. They just want to roll off Class 1 commercial boards and make money and not worry about defects.” Nevertheless, Space Information Laboratories has several good circuit board suppliers in California and one in Texas.