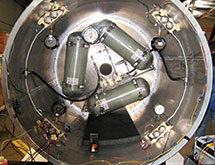 When it’s T minus 15 minutes and counting until liftoff of a rocket from its launch pad, it isn’t easy to get to a malfunctioning piece of equipment to fix or replace it. “Getting a rocket ready to launch and then standing down for a week while you replace a box is unacceptable and costly for our customers,” CEO Eric Grabow emphasizes. “So we put out the extra effort to make these boxes withstand anything that they will encounter during ground operations and flight.”

This includes vibration, shock, temperature, humidity and even lightning strikes. Some space missions may have only a very short launch window and if it is missed, it can be one-and-a-half years or more before that planetary alignment occurs again.

Unfortunately, fixing or replacing a box when a rocket is on the launch pad can take several days or weeks, Grabow notes. So the launch components that Space Vector manufactures are fully acceptance-tested and space-qualified before being installed on a rocket.

Space Vector says it has launched 37 rockets over the past 40 years in support of scientific and defense-related projects with a success rate of 94 percent. The company has a prime contract with the U.S. Air Force to provide launch vehicles under its Sounding Rocket Program (SRP-3). “Very few small companies do that type of work,” Vice President Tim Gray asserts. “We are also a classified facility, so we can handle classified data and product development.”

The company provides Lockheed Martin, United Launch Alliance and various government agencies with a variety of products and services. These include GPS metric tracking units, rechargeable flight safety and system batteries, fuel-sensing systems and reentry vehicle adapter structures and separation systems. “We’ve done almost every different type of part that goes on the launch vehicle, from electronic boxes to batteries, fuel injectors and valves used on the engines themselves,” Grabow maintains.

Many of the company’s vehicles are boosted by refurbished Minuteman motors that reduce costs substantially. “One of the areas that we are very good at is taking things that might be space-flyable and testing and modifying them,” Grabow explains. “We’ve done it for a lot of products that were commercially viable and have taken those into the space arena. They are very successful and are flying on multiple launch vehicles.”

One example is a commercial survey-grade GPS system. “It’s used by land surveyors and mappers around the world to find accurate locations of buildings and where they’re going to put their boundary lines,” Gray adds. “We took one of those receivers and several other commercial boards and developed a range safety tracking unit that is flying on all the Atlas and Delta rockets every three to four weeks.”

Such upgraded systems do not necessarily use parts from the military’s qualified lists that are prescreened for space, so they are less expensive and often feature a more modern design. “We take what we have and work with a commercial manufacturer to move components around on the board,” Grabow says. “For one board, we might have to add extra fasteners or staking so it would work better under a high vibration environment.”

Space Vector has located manufacturers who are willing to do such work despite the low quantities required, which might amount to only 10 or 20 annually. Nevertheless, such systems can be up to 10 times less expensive than ones that use pre-qualified parts.

Another example of a commercial part used in launch vehicles is a probe that measures the level of fuel in tanks. “We used an existing low-cost sensor and integrated it with a custom circuit board and successfully qualified and delivered that for use on the Atlas 5 rocket,” Grabow says. “The launch vehicle prime contractors are getting more flexible with this approach of taking commercial hardware and adapting it for aerospace applications.” Space Vector also reduces costs by designing its parts for manufacturing and soliciting input from its manufacturing department during the design phase.

Space Vector manufactures and assembles its products in a 22,000-square-foot plant at its Chatsworth, Calif., headquarters. “In addition to custom electronics, we manufacture thruster valves and regulators used in attitude control systems and build the solenoids ourselves to achieve high-response and fast-acting products,” Grabow says.

“We buy some sub-assemblies from manufacturers and also make our own custom boards,” Gray says. “Some things you just can’t find for a box. We have a custom power supply and filter board that are in our GPS tracking unit. Nobody made exactly what we needed, so we designed our own board. So those we build ourselves. Other things we buy as a completed assembly and add additional staking materials and conformal coatings, up-screen them and do thermal and vibration testing.” Almost all of Space Vector’s products have custom circuit boards in them for protection from electromagnetic interference and to withstand three lightning strikes before launch.

Space Vector has its own small machine shop. “We do our own machining as needed for more intricate assemblies,” Grabow says. “For higher production, we will outsource that to specialized machine shops. We do all our own soldering and crimping operations, and we do spot welding for battery cells that have to be connected together. We need to have a really reliable, consistent process for this welding, and we weren’t getting that outside, so we brought that in-house.”

The company is using 3-D printing for rapid prototyping in plastic. “The more we do it, the more applications our engineers find for it,” Grabow points out. “It’s been helpful for us to print a product and do a fit check with a plastic piece to see how well it fits in their existing system,” Gray adds.

To increase speed and accuracy in testing, Space Vector has used new software and hardware to automate its testing procedures. “Before automating testing for our GPS system, it took two operators 45 minutes to run a test,” Gray recalls. “Whereas with our fully automated system, it’s down to three to four minutes to run the test, with a single person hitting a single keystroke.”

For the future, Space Vector would like to expand into the market for components that remain in space, such as on spacecraft and the International Space Station. Such components have different designs than launch components because they have to withstand radiation and extremes of temperature over long periods of time. The company also is examining possible acquisitions or partnerships with companies that specialize in technologies that are complementary to Space Vector’s.

Gray attributes the company’s success to its customer service and experience. “We’re really big on relationships with our customers and making sure we help them get their missions accomplished,” Gray stresses. “We came out of the rocket business. We understand what customers are looking for and what’s important to them. We understand that schedules are king, that you have to deliver and you can’t delay programs. We are really good at giving the customers what they want when they want it. We stick with them until the end and make sure they have the support they need.”