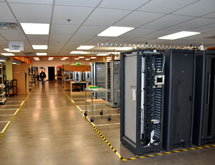 When you see a NASCAR program that features scenes shot from the inside of a driver’s car, there’s a good chance that footage was stored with the help of Spectra Logic Corp., Chief Technology Officer Matthew T. Starr says. Its products are used to store digital footage from those cameras, in the event that NASCAR will “repurpose it in the future,” he says.

For instance, if a driver places fourth in one race and even higher in another, that footage may be used to “show a progression of him racing,” Starr says. “[We give] them the ability to keep everything.”

Thompson sold memory boards, peripheral test equipment and storage systems out of his dorm room. In 1988, the firm acquired the assets of interface company Spectra Logic and adopted its namesake.

In the 1990s, the company moved into digital tape storage. Today, “Approximately 70 percent of our customers are archive customers who have a great deal of data,” Starr says. “They want to keep all of it, but they don’t want all of it on a really expensive spinning disk.”

The tape libraries give Spectra Logic’s clients a smaller and less expensive option to store their data that lasts “a very long time,” Starr says. He adds that the firm’s customers include The Discovery Channel; Argonne National Laboratory in Lemont, Ill.; Hill Air Force Base in Utah; and NCSA.

A 23-year veteran of Spectra Logic, Starr has experience in service, hardware design, software development, operating systems, and electronic design and management. Previously, he served as the lead engineering architect for the design and production of its T-series tape library family.

Under his tenure, the company has secured 36 tape library patents. Starr notes that Spectra Logic is a technology leader, but that is not its greatest achievement. “That’s a byproduct of what you are,” he asserts.

Instead, being close to customers has been more important. “[We’re] the people who actually talk to the customers more often than our competition,” he declares.

For instance, Spectra Logic is conducting an advisory board where it surveys 50 customers. “We’re taking that feedback back into the company,” he says.

Another contributor to its success is its ESOP status. “Most of our associates are owners or can become owners,” Starr says, noting that this helps them understand why product quality is so essential. “I hope we never lose that.”

Last year, Spectra Logic invested much of its time in finding areas for cost reduction. “We looked at where we were spending our money,” Starr recalls. “This year, we’re going to target cost equality areas as we look at what’s costing us money and keep it from leaving our hands.”

Part of this, he says, involves keeping a close eye on production so that product flaws are discovered earlier, and not in the final quality assurance review. “We want to catch that much farther up in the supply chain,” he says.

Although Spectra Logic has followed these procedures in the past, “We’re putting a bigger effort into it,” he says. “The more testing we can do much earlier, the better we’re going to feel about driving the cost of quality up.”

A challenge for Spectra Logic is to hit the market on a forecast versus what it has on hand, Starr says. However, “We’ve done really [well],” he asserts. “A lot of people try to look at forecasting perfectly and try to hit the mark.”

Spectra Logic has coped by changing the way it has sourced parts. For instance, if the company expects to sell 50 units of a product in October, it will give itself a lead time of 12 weeks and buy additional “safety stock,” he says. “We can adjust the forecast at the end of the buy cycle,” Starr says. “We’re willing to take a small inventory bump with our long lead-time so we can build everything we need.”

For the next two years, Spectra Logic plans to keep focusing on the costs of quality, Starr says. Also, it will introduce products “in the next few quarters that will change how we manufacture,” he predicts.

These products, he notes, will be more high volume and have much shorter lead-times. “We might have to get those lead-times down to less than a week,” he says, but admits this will be challenging. Currently, Spectra Logic has one- to two-week lead-times for easy products.

More complex products, he notes, require eight-week leads. “This will require a different model for purchasing and manufacture/assembly,” he says, noting that it plans to introduce these new products at the end of this year. “[By] summertime next year, it’s going to be hitting its stride.”