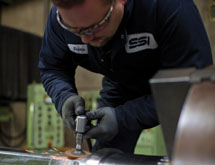 SSI Shredding Systems does not shy away from tough jobs; in fact, it’s built a business on them. The Wilsonville, Ore.-based firm designs and manufactures low-speed, high-torque industrial shredding systems that can handle a variety of materials, ranging from paper to automobiles. When Tom Garnier founded the company in 1981, he says there were already established companies in the business. So, SSI differentiated itself by serving as a kind of catch-all for the odd jobs no one else could or was willing to do.

“When you think about it, we were this small Oregon company being approached by these Fortune 500 companies so they had to have a compelling reason to do so,” Garnier says. “They had specific needs, but they couldn’t find their solution in the brochures from other manufacturers. So when we started, they came to us, and we needed the orders so we said, ‘Yes, we’ll do what you want.’ So we really got pushed into being an engineering firm because the customers we ended up with were companies that couldn’t get what they needed somewhere else.”

In that vein, SSI evolved into a company that never says “no.” The company has customized systems for more than 3,000 applications used in 53 countries and on all seven continents. The vertically integrated company handles the process from A to Z. It begins with figuring out the science of whether something can be shredded, to engineering a model capable of doing the shredding to physically creating the system.

“If you treat something as a science project, you get further because you ask better questions,” Garnier says. “Science lets us know if it can be done, and engineering perfects it. We are first and foremost a design firm, but it just so happens that we have the facility to manufacture.”

SSI has a campus of four facilities, in fact, employing 180 people in a highly vertically integrated organization that handles just about everything in-house, excluding heat-treating and a portion of its burn work. SSI’s in-house skillset has granted it the flexibility to do custom work and also evolve with its customers’ changing needs. In its early days, Garnier says SSI’s efforts mainly went to creating waste disposal systems – taking large or hazardous items and processing them into an easily disposable form. That has changed.

“We build shredders, but we’re not in the shredding business,” Garnier says. “We produce products that customers need and when their needs change, our products change. More recently we’ve been producing machines with finer particle control or things that separate rather than shred – for instance, if someone wants to shred a tire but they also want the wire removed from the rubber in the same process. Because we are focused on those needs, we now recognize that we are in the material-handling and material-preparation business and it can be for disposal or reuse.”

Because of this shift, SSI has been working on new models such as the GT 900, which processes finer particles. It’s under construction now and will be ready for testing in July.

As SSI continues to tailor its products to its customers’ processes, the company works to fine-tune its own manufacturing process, as well. SSI has always operated in a lean manner.

“We started the company in 1980 when there was true recession, worse than this most recent one,” Garnier explains. “So we were lean to begin with. We’ve always had things like just-in-time manufacturing, because I worked at other manufacturers and I saw what happened when you had too much inventory. You have to manage it and store it in conditions where it’s not rusting or exposed to the elements. It’s also time sensitive. If you make something for a specific application but that application never materializes, now you have a part you don’t need. It’s better to have just-in-time material. You make what you need and no more. But just-in-time is only one of the first steps in lean.”

Rather than an end-goal to become lean, Garnier sees the process as more of a journey in being lean – a constant state of continual evolution. That mindset causes the company to question its processes under the general lean principle of pinpointing the “minimal amount of effort needed to get the maximum return.” The work-smart-not-hard theory is not necessarily in the who – although Garnier clarifies that skilled workers are a necessity – but in the how.

“Usually, if something isn’t working out in the process, most people will say, ‘I don’t have the right crew,’” Garnier says. “The truth is though, it’s rarely the workers. Ninety percent of the time it’s the process. People generally like to please but if you don’t put them in the right environment to succeed, do you blame the process or them? Human nature is to blame them, but if you strip it back, you’ll actually see it’s the process.”

SSI’s most recent process-perfecting initiative involves using analytics from its advanced machinery to pinpoint and remedy underperformance. Garnier says the old way of doing that was to look at time cards – when operators punched in and out. But with the computing capabilities of today’s machinery, Garnier says the equipment itself can tell you how much it should produce in a given time, allowing SSI a more accurate way to measure productivity.

“Say you want 90 percent uptime and based on the parts you are doing that day, you should produce 275 parts but you end up only producing 260 parts, well then you know the machine wasn’t as efficient as it was supposed to be,” Garnier says. “Now you have to figure out what’s up. Did the material arrive at the machine in a timely manner? Was the condition of the material satisfactory for the machine? You can use the machine to tell you what you should be doing. It allows you to focus on uptime efficiency rather than managing timecards.”