Back to Profile Gallery > Stacker LLC 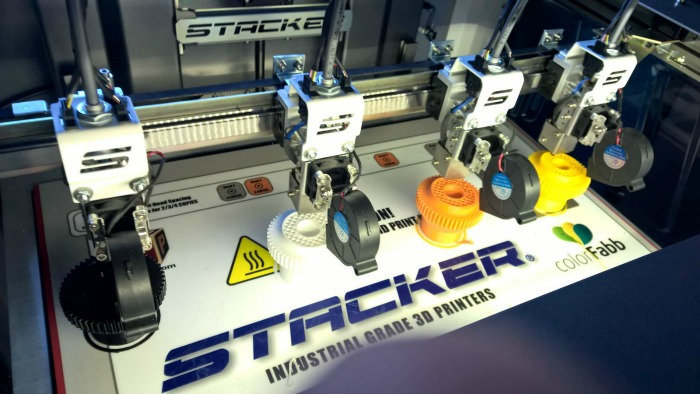 Stacker LLC’s customer base includes almost anyone in the world, CEO Norston Fontaine says. “Everybody needs a 3-D printer,” he declares, naming industrial plants that move fluids as an example.

“[They] should have a 3-D printer so they can make their own gaskets, O-rings or seals,” he says. “A first-year CAD student could design anything that most industries need for cheap [with a 3-D printer].”

“We’re really proud of what we did,” he recalls, noting that campaigns for niche projects sometimes fail. “According to Kickstarter, it was pretty incredible.”

After fulfilling all of its obligations, Stacker took its profits and brand equity and put them toward its current generation of printers. This includes the S2, which can print up to four parts at once, and its S4, which can do the same, but at four times the print speed.

Fontaine has extensive experience with 3-D printers. “I’ve been a design engineer for most of my life,” he says, noting that he purchased a 3-D printer in 1988 for $3,000. “I always willing to get 3-D printed objects of my prototypes.”

The idea for Stacker came when he worked on a project that required dozens of parts to be printed. When Fontaine built his own printer, “It worked fantastically,” he recalls.

“I came up with new technology to do things,” he says, noting that the success planted the seed for Stacker. “I said, ‘Let’s go to market with this.’”

Today, Stacker makes the only true industrial 3-D printer, Fontaine claims. Although its customers include government agencies, “We’ve also been dealing with some very large companies, along with small-time manufacturers,” he says.

“A lot of prototyping shops and a lot of print houses use our printers,” he says, noting that the creation of prototypes represents the largest market for Stacker’s products.

But it is a market in decline. “Twenty years ago, prototyping was 100 percent of the market,” he recalls, noting that this has dropped to 50 percent as more clients are using the printers to manufacture their own products.

For example, major companies like Ford Motor Co. and General Electric print thousands of parts daily for their manufacturing process “because it’s cheaper and better” than buying them, Fontaine says. “We expect in the next five years for these products to be 50 percent of our market,” he says.

Stacker recently showed an aluminum extrusion company the benefits of a 3-D printer when it helped them print gears for their facility. “The plant is 100 percent giant hydraulics and steel,” he recalls. “Because they didn’t have the expertise to do this, we printed the gears for them.

“They were up and running the next day,” Fontaine continues, noting that the company has since purchased its own printer. “Contrary to what you might think, you may still need a little plastic part where everything is [mostly] steel and hydraulics.”

Many prototyping shops and print houses use Stacker’s products since its products can provide performance all day long. They also provide a high-quality level at a low cost, Fontaine says.

The company also beats its competitors in the area of efficiency, Fontaine says. Not only can its machines print four objects at once, but it also is working on a 25-head printer. “Let’s say you needed 25 parts,” he says. “That’s 25 times faster than if you just printed one at a time.”

This ability has benefited many Stacker clients, including the largest lighting manufacturer in Europe, Fontaine says. “They can use 3-D printing to save them a tremendous amount of money in tooling costs,” he says.

But it also gives them the ability to be more creative. “You can change your colors, you can customize it and you can experiment with different materials,” he says. “When you can print so many iterations and so many different shapes and colors, it exponentially grows your creative process in your company.

“It’s also quite impressive when you can get quality, 3-D printers with affordable filaments within the hands of people,” he says. “Things are just changing every day because of it.”

The printers also provide users with advantages over the use of injection molding. “What you can’t do in injection molding is embed hardware or have undercuts or all sorts of complex, inner structures that would add tremendous strength to your parts,” he says.

Thanks to 3-D printing, “You can have big, thick and chunky parts with infill that you can see,” he says. “But it does require you from the beginning to keep in mind that you’re building one layer at a time.”

Stacker’s 3-D printers also can use nearly every type of filament, ranging “from carbon fiber to bamboo-filled PVA,” he says. “If it can be injection molded, it can be 3-D printed.”

Stacker takes pride in the fact that it has kept its manufacturing in the United States. “Ninety-nine percent of our printers are made right here in Minnesota,” he reports, noting that its electronics packages are made in Los Angeles.

“We can’t trust our quality to any offshore manufacturers,” he says, noting that keeping manufacturing U.S.-based gives it more control. “We need that level of just-in-time delivery. We want to keep those jobs in the United States.”

Stacker has applied unique solutions to its production operations, including “hybrid manufacturing,” Fontaine says. Like many upstart companies, “We had hundreds of thousands of dollars tied up in inventory,” he recalls, noting that the excess inventory was taking up too much shop space.

Problems also occurred when one supplier sent steel parts to a powder coater and they arrived damaged at Stacker’s shop. “You would eat that part, because it’s not worth vendor relations trying to find out [who damaged it],” he recalls.

The company solved this problem by having its subcontractor not only laser and stamp the steel parts, but also powder coat and assemble them into the steel frames for the printer. The supplier then delivers them to Stacker on a daily basis, which then immediately uses them to build 10 printers.

“By the next day, they’re out the door,” he says, noting that the company also created a new printer design that eliminated complexity and reduced part count. “[This makes] it so anyone can put it together.”

The printers also are built around a sophisticated and rigid building jig, Fontaine adds. Before they leave the plant, “Each printer is built and inspected by a team that consists of our subcontractors’ labor as well as Stacker employees,” he adds.

“Their team does 80 percent of work, and our team does 20 percent,” he says. “That’s why I call this ‘hybrid manufacturing.’ [You need to] get your subcontractor to work with you on this, but give them support. It’s not going to happen otherwise.”

Stacker also utilizes a “moving assembly cell” system to put together the printers, Fontaine says. Within the process, a team of two people will roll a steel frame from station to station as they build up the printer. “At the last station, they’re running a print of a little Stacker emblem,” he says.

Initially, the company encountered the traditional problems when manufacturing with cells. “We had large, more cumbersome lines,” he recalls. “We also had a lot of work in progress laying around.”

Stacker encountered “the silo effect,” where workers in cells only took responsibility for their own duties, which would lead to problems discovered further down the line. “We created the length of our moving assembly line to have enough space for three teams with three printers at one time,” Fontaine says.

The company also created cells where the pair completes each step, as opposed to a worker at each station. “We’re eliminating the hand off from one team member to the next,” he says, noting that this requires the workers to put on the printer’s belts, install the electronics and add wiring. “It’s a tremendous amount more responsibility, but they feel a lot better about doing it.”

Stacker also has partnered seasoned employees with less experienced workers in this process to help troubleshoot issues faster. “They can really take care of problems when they come up,” he says.

After gaining experience, “Everyone can fill in and get the printer built,” he says, noting that this made the manufacturing process more fluid. “It’s just really remarkable how it increases your efficiency.

“It reduces the subassemblies on the floor, and you always want to reduce those,” he says. “You don’t want to slow the line down with a complex assembly, if you can.”

Stacker stands as an emerging company within the 3-D printer market, Fontaine says. “The leader now is Stratasys,” he says, also highlighting 3D Systems as a major in its field.

“A lot of our parts are very similar to theirs in terms of material strength,” he notes. “But we have parts that are exceeding the sales of their material.”

General Electric also recently made a $1.4 billion investment to get into the market, while Hewlett-Packard spent $1 billion. This shows that it is a good time to be in the 3-D printer business, Fontaine says.

He sees growth for Stacker, which will include more printer models that fulfill particular niche markets. Although there will be a limited customer base for a 3-D printer with 25 heads, it will fill the needs of “a manufacturer with a larger scale production,” Fontaine asserts.

“We’re looking at machines that use more than one print head to print the same object,” he says, noting that if a client wanted to print a one-meter by one-meter object with a single print head, it would take weeks.

“But if you have four print heads, now you have a matter of days, so you can print pretty large objects,” he says. “[We’re looking at] increasing the speed of printing technology.”