Back to Profile Gallery > Stant 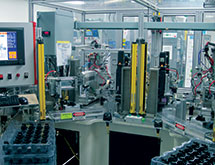 “That doesn’t happen now,” Stant President and CEO Curt S. Howell says. “Our parts trap that vapor and give it back to the engine to combust, which improves miles per gallon and air quality.”

Indiana-based Stant is a world leader in the design and manufacturing of vapor management systems, as well as fuel delivery systems and thermal management systems, and a provider of other engineering services. The company makes fuel closure caps, on-board vapor recovery components and engine and transmission cooling components for the automotive industry.

“The increasing stringency of the Environmental Protection Agency has helped to drive our business,” Howell explains. “Our products keep hydrocarbons from getting into the air.”

The company has been making related parts all the way back to the days of the Model A, when it supplied Ford Motor Co. with radiator caps – as well as hood ornaments, which it also produced for many classic cars, such as the Lincoln, Packard, Pierce Arrow and Auburn. But Stant is even older than that – it was founded in 1898 by two brothers who made piano parts. By 1915, Stant was the world’s largest producer of piano tuning pins. World War II ushered the company into new types of manufacturing, and Stant began producing 50-caliber machine gun shell casings for the U.S. military.

Stant has cultivated a market-leading position by capitalizing on its wide-ranging experience and ability to provide its customers with innovative solutions for challenging applications. It focuses on three markets and three product line segments: automotive OEM, industrial and aftermarket.

The industry is very fragmented, but Stant “saw it coming and got ahead of the curve with consolidation through acquisitions,” Howell says. In the past four years alone, the company has acquired three companies and doubled its annual revenue, profitably so.

“Our competition might do one kind of valve, and another might specialize in filler tubes or gas caps only, but we do it all in this area,” he says.

“We’re able to meet requirements based on our understanding of the entire system, and as a result, we’re able to help our customers design the most efficient systems,” Howell says.

The company has earned multiple quality awards in the automotive, industrial and aftermarket industries and is TS16949 and ISO 14001 certified.

This past March, Stant announced it had landed a multi-million-dollar, multi-year contract for capless refueling – it is one of the largest contracts in the company’s history. “The product category – capless refueling systems – is a core competency for Stant and provides an innovative alternative to traditional fuel closure caps,” Howell says. Production is scheduled to begin in 2015 in North America and China.

Stant is an approved supplier for most automakers, including General Motors, Ford, Chrysler, Fiat, Honda, Nissan, Hyundai, Mercedes and Volkswagen. “It’s difficult to find a car that doesn’t have our parts on it,” he says.

About a quarter of Stant’s business is in gas caps and engine thermostats for the aftermarket segment, where it supplies companies such as Advanced Auto Parts and Pep Boys. Stant also does robust business in the marine industry and is the largest carbon canister supplier for recreational boat engines.

Howell anticipates that Stant will experience explosive growth in China, where the government is beginning to crack down on polluting hydrocarbon emissions. New standards will go into effect there starting in 2015.

“We are actively marketing in China and teaching that market about what we do and how to meet regulations,” Howell says.

Stant already has two plants in China and a significant sales force there. The company presents at technical conferences in China several times a year and participates in engineering roundtables with OEMs to discuss solutions.

“We do very little business in China right now – about $10 million in annual revenue,” Howell says. “But I expect that our presence there will quintuple in the next three years.”