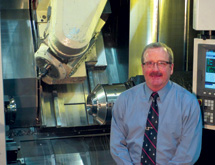 Twenty years ago, Stein Seal Co. was shipping $10 million a year. Today, the company ships more than $40 million a year and its growth continues. This is all because a year-and-a half-ago, owner Philip Stein set a growth goal that matched forecasted growth for the aerospace industry – approximately 60 percent of its customer base. If the company was prepared for the boost in aerospace equipment production, it stood to potentially double its revenue over the next eight years.

“These are not your basic rings and seals,” Schuler says. “These are very complex steel housings that are made out of stainless steel or titanium and high-temperature alloys, and it’s housing a graphite seal that’s very complex. There is a lot of detail to it, and the engineering behind it is something we’ve been developing for over 50 years.”

The company’s product variation is so great that Stein Seal  has the ability to test the manufacturability of each design to ensure that it can be economically produced at a high quality. Because its operations are anything but run-of-the-mill, Schuler explains the key to its past growth and the determining factors in future growth are to have a talented team to streamline manufacturing processes as much as possible.

Set Up for Efficiency

Stein Seal has integrated principles of Six Sigma and lean manufacturing into its operations. The manufacturer operates four plants, one each in Mexico and India and two plants in Pennsylvania – one of which it recently purchased. In its original Pennsylvania facility, Stein Seal organized its graphite production into manufacturing cells more than a decade ago. When tooling manufacturers developed programmable multi-axis and multi-spindle machines about six years ago, it was able to do the same with its steel.

“By organizing our manufacturing into cells, we were really able to cut down on lead times on our production, and it put us in a position for the growth spurt that we’re in right now,” Schuler says.

In the last year, Schuler says the company has invested more than $2 million in new equipment in Pennsylvania alone. It has added three new manufacturing cells to the main plant, which allow parts to be moved seamlessly from one process to the next without hauling them across the facility. The setup also allows the company to maximize advantages of new tools or processes, such as a new measuring tool Stein Seal recently purchased.

“We purchased a new tool called the Equator and it’s a comparative measuring machine that, as far as quality is concerned, should be revolutionary to our business,” Schuler says. “It’s an extremely repeatable and accurate machine that should eliminate in some cases having 20 gauges on a table to measure different features. When you add an improvement, you want to take advantage of it in all of the cells.”

The improved layout affects quality, as well. Schuler explains that its recently increased inspection department had been the company’s most fragmented area, with inspection stations scattered throughout the facility. The department is consolidated in the new arrangement, allowing it to inspect more efficiently and turn products around quicker.

“All the inspection will be in one area where we can queue work more efficiently and store work that needs to be inspected,” Schuler says.

To match the increased capacity, Stein Seal has also invested in its workforce. Ten years ago, it set up a machinist apprenticeship that has workers ready to operate nine-axis machining equipment by the end of training. With its workforce, equipment and facilities, Schuler is confident that Stein Seal will reach its goal.

“We are definitely setting ourselves up for growth over the next six to eight years to reach that $80 million in shipping,” he says.