Back to Profile Gallery > String Furniture

Iconic Swedish brand String Furniture designs, manufactures and sells its modular shelving systems to 44 countries across the globe and is generating demand in new markets such as the US, China, Japan and South Korea

Designed in 1949 by Nils Strinning, the shelf system String went on to become one of the twentieth century’s foremost iconic designs. It was Nils who found a solution to the time-consuming 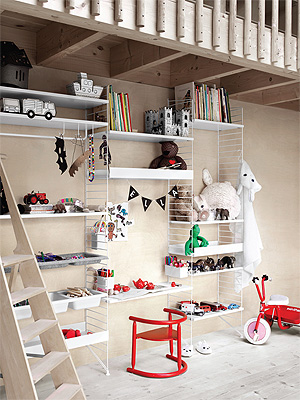 process of drying dishes, developing a dish rack that incorporated plastic coated steel wires, which would later become known as the Elfa Dish Rack. From this achievement, String was developed, combining function with aesthetics. Simple and humble, String is a dainty, light shelf with thin side panels that benefits from thin packaging and is easy and cheap to transport. It is also easy to assemble, with shelves that can quickly be repositioned, and comes with shelves of various depths that can be combined. Moreover, books and other items can be held in place by the side panels, which offer stability, a strength that can be extended in all directions of the system.

Whether the wall surface is large or small, String is functional and boasts an elegant and clean-limbed style thanks to its coloured threads, which are a slender ladder that ascends the wall. Thanks to its admirable qualities, such as being ingenious, variable and flexible, it comes as no surprise that post-war Europeans, hungry for freedom, adored String when it was launched.

Crowned the winner among 194 entries submitted for Bonnier’s bookshelf competition in 1949, String offered customers affordability, simple transportation and delivery, and easy assembly when it was officially launched the same year. In 1950, the company received an order for the offices in a newly built building in New York and the order was completed successfully. Three years on, String Plex was introduced and the standalone string shelf was launched, with Nils never becoming a fan of the product. In 1954, the company was awarded the gold medal at the Triennale in Milan and went onto exhibit one year later at h55 in Helsingborg. Following a number of court cases for plagiarism, String was able to patent its shelf in 1961. This development opened up opportunities for String Continent to be launched in 1963 and a new storage concept, Tingoteket, to be launched in 1970, however this never became a hit. Almost a decade later the String Shelf was incorporated into the Swedish National Museum’s Design Collection in 1979, reflecting the design heritage of the product and acknowledging its pedigree in furniture architecture. As further product development and increased demand for String took place across the globe, the company’s Founder went on to win the Classic Prize in 1999 and the company’s computer shelf won the Excellent Swedish Design Award the same year.

In 2004, the company we now know as String Furniture was established and subsequently purchased the String brand and the right to produce its famous shelving system. At the h05 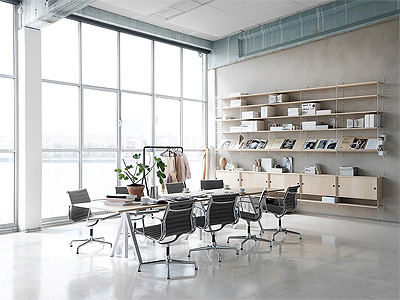 exhibition, 50 years after String first exhibited at the event, String Furniture re-launched the brand in Sweden with the unveiling of the all-white String shelf. With walnut, oak and solid black launched the same year, the company also unveiled String pocket at the form/design centre in Malmo. Four years on, the company turned 60 and celebrated by letting Mats Theselius style a limited-edition String pocket. The result was 600 numbered string pocket shelves in gold/rosewood. During this same year, String shelf was classified as a work of applied art under copyright law.

In 2013, the company collaborated with Bjorn Dahlstrom and Anna von Schewen and developed a folding table. Following the success of this, the company worked with Anna and Bjorn once again to develop the office range String works, which was presented for the first time in 2014. In 2016, this collection won the German Design Award. Today, following decades of expansion and growth, the iconic brand is seen throughout houses in 44 countries across the globe, but predominantly in Scandinavia, West Europe, Germany, France and the UK. Produced in four manufacturing bases in Sweden, one of which produces the string upright, two produce all the panels and another the ancillary parts, the company’s products are increasing in demand in new market areas such as the US, China and Japan, where it has opened a new showroom and stockholding facility.

With further product developments in the pipeline, it would appear that the company has the world on a string as it continues to benefit from long-term expertise and a reputation for functionality, quality and a simple yet stylish design.