Back to Profile Gallery > StyroChem 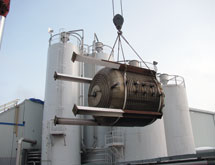 Some manufacturers are rigid in their ways and resistant to change, but not StyroChem. The expandable polystyrene (EPS) manufacturer remains successful by maintaining an ability to customize for its clients.

“We’re [more] willing to take on harder challenges than other manufacturers in our industry, such as customizing formulations,” says Melissa Wallum, director of technology and specialty sales. “[That] is something our competitors have shied away from.”

StyroChem, which has locations in Montreal and Fort Worth, Texas, manufactures its EPS products for foodservice, packaging, construction, casting and specialty applications. The firm began operations in 1978 as Expandable Technologies, and initially produced material for foam coffee cups.

Throughout the years, the company branched out into other EPS applications and implemented the StyroChem name in 1994. “We cover every application that EPS is used in,” she says, noting that these include cups as well as material for a six-cylinder engine for BMW. “We specialize in the more technically demanding markets.”

However, President Glenn Wredenhagen notes, 70 percent of StyroChem’s work is for foodservice clients. “It is a very favorable mix for us,” he asserts.

Amongst StyroChem’s newest products is EVRgreen™, an EPS resin that is used to produce a polystyrene foam cup that can degrade in a landfill in 10 years, which is hundreds of years shorter than it usually takes, Wallum says. This is ideal for those interested in environmentally safe products.

StyroChem has continuously focused on improving its manufacturing operations. According to Wredenhagen, the company implemented lean manufacturing in its operations five years ago, and has not stopped looking for ways to become more efficient.

“We’re always getting leaner,” he says, noting that lean was critical to surviving the economic crisis. “If it had not been for that, I don’t think any of us would be in North America right now. I think the ones who are left have learned to live lean.”

Additionally, StyroChem’s Montreal plant is fully “fly by wire,” where all manufacturing activities, inventory and logistics can be monitored real time from anywhere in the world by any level of management. Because of this platform, all managers and technical people can be contacted and consulted at any time of the day or night. By simply opening their laptops, they can be immediately immersed in the process. Feedback and problem resolution is real time and immediate.

In addition, the products are checked for quality in “real time.” “The testing is built into the process,” Wallum says. “As soon as it is packaged, within 30 minutes, they know the quality of the material.”

General Manager Marc Cayouette adds that the firm’s Montreal facility recently expanded its operation with new equipment, allowing it to produce 120 million pounds of material annually. “We put them in and fine-tuned the whole thing,” he says.

Cayouette notes that StyroChem has benefited from the aid of its logistics partners, who provide the firm with personal warehousing. “They take the product, move it out and put it in their yard,” he says, noting that the firms can hold it from five to seven days.

For instance, StyroChem uses such firms as Challenger Motor Freight Inc. and Prince Transport Ltd. to serve its clients locally. But when it needs to ship products to Mexico, the company utilizes Canadian National (CN), the largest freight railroad in Canada. “[CN] allows us to actually compete in that market,” he says.

“Our business in Mexico is significant and growing,” Wredenhagen adds. “With CN’s support, we are able to compete in this market with no significant freight penalty vs. other North American EPS suppliers that are farther south than we are.”

Cayouette predicts a strong future for StyroChem through its new EVRgreen biodegradable cup, which the company launched last year. Additionally, so far, the market response has been very positive worldwide, especially in Asia and Latin America, where disposal solutions are strongly needed.

Since EVRgreen is the cutting edge of eco-friendly technology for EPS, StyroChem has the responsibility of proving the soundness of that technology through multiple testing protocols. Once that stage is complete, there are worldwide franchises eager to rollout a cup that has the great performance of foam with the benefit of a positive environmental impact regardless of the disposal method a consumer may chose.

Although the Montreal plant is running well, the company may expand it, as well its plant in Fort Worth. “We just purchased a new building besides the Montreal plant,” he states. “That’s going to be used for additional warehousing.”

Wallum adds that StyroChem plans to add a greener raw material for its products in the disposable food industry. “The testing is almost complete,” she notes.  mt