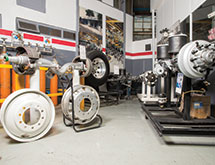 Every motor vehicle is made up of hundreds of intrinsic parts that are unquestionably required for making it run. Among these parts, there exists a highly important component – the axle – and among the many different types of axles, there is an axle specially designed for trailers as a one-piece non-traction axle. This specific part is manufactured by Super Diesel S.A – referred to at times as Sudisa. The company has been in business since 1952, and is the leading manufacturer of trailer axles in Mexico.

When Super Diesel opened its doors in Guadalajara, it mainly worked on marine motors, but as time went on, its focus changed to the restoration of diesel motors. Eventually, Super Diesel became Mexico’s first manufacturer of non-traction axles for trailers. In 1977, the company began exporting its product to several countries, and a few years later, it developed its own technology for making one-piece axles. For the last four years, it has been growing its suspension business with much success, as well.

Staying Ahead of the Market

Today, the company is joined by Quimmco Group and Meritor to form a joint venture, a corporate agreement that has proven to be a competitive advantage. Human Resources Manager Gerardo Gonzalez, who has been with Super Diesel for 10 years, explains that Super Diesel focuses solely on the manufacturing, while Meritor operates the engineering and marketing departments. In this way, each company is able to concentrate on what it does best.

The partnership with Meritor comes in handy, especially in adapting to an evolving market. “Our product continually changes,” Gonzalez notes. “The people in the marketing division are very attentive. Meritor – which takes care of all of our merchandising – investigates the market and its tendencies.” From there, Super Diesel applies the suggestions, along with designs from Meritor’s engineers, and adapts its product to meet new demands. “We have many different models of axles now,” Gonzalez adds.

The auto parts market is a competitive one, and Super Diesel constantly feels the squeeze, especially from Chinese manufacturers. Gonzalez relates that the profit margin for this type of work is extremely tight. “Chinese companies present very aggressive competitive prices,” he notes. Another economic factor is the price of steel tube, which fluctuates and also leaves little room for profit. “There are treated and untreated pipes,” Gonzalez explains. “We make a mix of both.” Green or virgin steel tube can cost $1,600 per ton. Treated material can cost $2,000, and there is little variation in prices among different suppliers. “Our primary challenge is that we are very dependent on the prices of steel tube,” he says.

Earning more than $26 million in 2014, Super Diesel splits its business equally between domestic and international sales. While it does not sell directly to the customer – Meritor handles all sales – the manufacturer remains highly conscientious about the quality of its products to ensure the best vehicle parts for its end-users. Super Diesel is certified under ISO-TS 16949-2009. Moreover, every year the company holds “Quality Week,” five days of conversations, presentations and overall focus on the importance of product quality.

“Every year we dedicate an entire week to focusing on quality and another week to safety,” Gonzalez says. Safety is an important message the company wants to share with its workers, and he believes that reinforcing the importance of it throughout the year, as well as showering employees with safety information during “Safety Week,” helps reduce accidents.

Training is an important part of Super Diesel’s corporate culture, and the results have been effective. Turnover remains low. Some employees have been with the company for 40 years. “Every year, we evaluate the capabilities of our employees,” Gonzalez says. “Between our employees and laborers, we have almost 160 people. More than 90 courses have been given this year. It’s one of our most important steps toward improving the capabilities of our team.”

The extensive training is most assuredly one of the elements Gonzalez is most proud of. Another he feels strongly about is Super Diesel’s commitment to keeping the environment as clean as possible. Super Diesel qualifies for Mexico’s “Clean Industry” (Certificación de Industria Limpia) government certification. The manufacturing plant contributes to the prevention of global warming by reducing its emissions to a level that is below the norm. Care is also taken to not contaminate the municipal water. Emissions are reduced by treating the water before leaving the factory and reaching the city drainage systems.