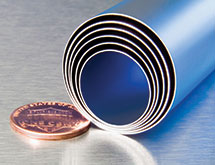 Developing innovative technologies for highly specialized uses is nothing new for Superior Tube Co. Since its founding in 1934, the Collegeville, Penn.-based company has been called upon to produce tubes that have set world records for their small size and tight tolerances, which has played an important role in the initial development of aerospace, medical and nuclear power industries, amongst others.

“We are definitely a specialty manufacturer,” Director of Operations Ben Huber says. “We thrive working in highly regulated and demanding environments, and we can bring to bear a lot of technical and metallurgical resources that we have in-house to help solve our customers’ toughest challenges.”

The company works with specialty grades of many durable, high-quality metal alloys, including stainless steel, nickel, titanium and zirconium. The majority of its products are two inches in diameter or smaller, Huber notes.

Superior Tube’s markets include aerospace, nuclear, medical, and oil and gas. The company’s tubes are used in a variety of applications, including as control rods in commercial nuclear reactors, as hydraulic lines in aircraft engines and as medical stents.

The company, which celebrated its 80th anniversary in 2014, has seen its products used in a number of historically significant ways. The company’s products were selected for the world’s first nuclear-powered submarine, the USS Nautilus; as well as on the Bell X-1, which was used to break the sound barrier; and the Apollo project, which put the first man on the moon.

Superior Tube continues to find new applications for its products while broadening the markets it already operates in. Within the past year, the company has expanded into the oil and gas market, where its high pressure, corrosion resistant tubes are used in heat exchanger applications, subsea control lines and instrumentation. “We’ve gone from having a market share of zero in this industry a year ago to delivering a significant, multimillion dollar order this year to a company in India,” Huber says.

The company is also undergoing vendor qualification from a leading European aircraft manufacturer. This would allow Superior Tube to expand overseas its aerospace industry work, which already includes serving as a key supplier to leading American aerospace OEMs. The company will collaborate with sister company Fine Tubes, based in Plymouth, United Kingdom, to build its international market share. “We’ve always had an international presence, but there are certainly opportunities outside of the United States for tubing applications,” he adds.

Expansion is a high priority for Lexington, Mass.-based Watermill Group, a private equity firm that purchased the company in 2012. “They bring a different expectation for the business than our previous ownership had, but they are also willing and able to make capital investments in the company which have opened up opportunities as well as expectations for us to go after market share in sectors we previously didn’t participate in,” Huber says.

Superior Tube’s owners are investing in three main areas of the company’s operation. The first of these is the maintenance and performance of its equipment. The company also improved its production flow by moving equipment and is automating many of its processes. “Within the past decade, we weren’t necessarily the most cost-competitive company, so we’ve been taking significant action with the support of our owners to drive down costs of our operations in the form of automation and applying better technology,” he adds. “These are investments that are necessary for us to be more competitive in the markets we want to be in.”

Superior Tube’s manufacturing operations are centered on three main processes. The first of these is tube reduction, which involves decreasing the diameter and increasing the length of a piece of pipe by applying force to the outside of a tube. The company also regularly performs welding as well as drawing, which involves pulling a tube through a die to decrease its diameter. Other manufacturing processes include annealing, grinding and cleaning.

The company typically runs low-volume, high-mix production lines, with frequent changeovers. Superior Tube dedicates specific pieces of equipment to certain sizes and types of pipe, which allows it to be flexible in its manufacturing operations, Huber notes.

Superior Tube is ISO 9001 certified. In July 2014, the company received AS9100 certification, which allows it to expand its work in the aerospace industry. The company within the next year hopes to attain NADCAP certification for its heat-treating and welding process; Superior Tube is already NADCAP certified for its non-destructive testing procedures and is also DDTC registered as a manufacturer of defense-related articles.

The company operates a testing laboratory within its manufacturing facility, and its quality test methods include ultrasonic and eddy-current testing.

Superior Tube practices lean and Six Sigma methodologies within its operations. The company partners with the Delaware Valley Industrial Resource Center in Philadelphia to train its employees in those areas; two-thirds of Superior Tube’s employees have some degree of lean training, and six employees are Six Sigma black or green belt certified, Huber says.

“Factories that have survived for 80 years aren’t doing things the way they always did,” Huber says. “If you visit ours, you’ll find an operation that is changing every day for the better. Optimization is on our daily agenda so we can offer our customers the best service, highest product quality at competitive lead times and prices.”