Back to Profile Gallery > Swift Group

Embodying a reputation built on innovation, value for money and customer engagement, the Swift Group represents a trusted and reliable brand within the caravanning market across the UK and beyond

With roots stretching back as far as 1964, the journey of the Swift Group has continued for more than 50 years and allowed the company to evolve as a leading caravan manufacturer through the delivery of groundbreaking design and the highest levels of customer service. The company presently employs over 1000 dedicated members of staff and generates a turnover or more than £200 million annually, making it the UK’s largest leisure vehicle manufacturer. Its range of products is designed to suit all budgets and requirements and Swift is the leader in the 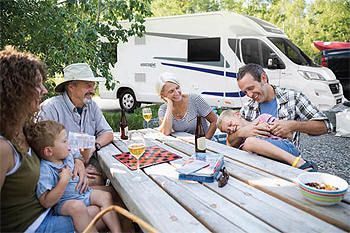 tourer caravan and motorhome sectors with shares of 40 per cent and 22 per cent in each market respectively. With a market share of around 20 per cent, the company is also amongst the leading producers of holiday homes within the UK.

The Swift Group was previously featured in Manufacturing Today Europe during February 2016, when the company’s Group Commercial Director, Nick Page discussed the group’s decision to invest £1.5 million into the installation of a state-of-the-art CNC router and a further £1.75 million programme to install a new laminating facility to cope with growing demand for its market-leading leisure vehicles. Indeed, such has been the success of the business in recent years that the Swift Group has announced an £8 million investment into an all-new production facility at its Cottingham headquarters to further enable the company to improve manufacturing capabilities and increase its production capacity. This latest round of investment was made public during July 2016 and will enable the Swift Group to establish a new production facility from scratch, which is an opportunity that is virtually unheard of within the holiday home industry. The new plant will enable Swift to create a state-of-the-art facility that will set new standards in the manufacturer of holiday homes and lodges, as well as to secure employment at the site for many years. This will emerge as a vital development for the Swift Group during 2017 and beyond as the caravanning and holiday home sector continues to grow, further driving demand for the company’s innovative leisure vehicles.

“Construction of the site is currently on schedule and we are on course to commence production of the company’s holiday homes and lodges during the summer of 2017. The modern facility will allow us to increase our production capacity, enabling us to meet increased demand while also generating further supply and production efficiencies,” says Group Commercial Director, Nick Page. “Growth is strong within the UK market across all sectors with touring caravans also performing well in the established European markets of Germany and Holland. Likewise, the company’s target markets in Scandinavia along with Australia, New Zealand and South Korea continue to perform well.”

The locally based firms Alan Wood Partnerships and Houlton were engaged to project manage and construct the new facility, which adds to the overall benefit the factory will bring to the surrounding community. Alan Wood Partnerships was established in Hull during the 1960s and has grown to provide a comprehensive range of services to the construction industry, while Houlton has previously worked with Swift during the 1980s when the company was commissioned to build its first production building at Dunswell Road. “This is an exciting time for Swift Group,” exclaims Managing Director, James Turner. “We are starting to see significant benefits from our manufacturing investments over the last few years and have high expectations for the opportunities this new facility will provide. It is also fantastic news for the local area, especially with two local companies securing the site’s project management and construction work.”

While the Swift Group continues to enhance its manufacturing capabilities, the company has also remained committed to introducing innovative new vehicle designs to meet the changing demands of the market. During October 2016 Swift officially announced the launch of its Basecamp caravan design. Basecamp is an exciting all-new, sporty, fun and stylish compact crossover camping vehicle that was created with adventurous customers looking to discover new experiences away from the crowd in mind. The vehicle was developed to appeal to those engaged in outdoor activities, including high-energy pursuits and to camping enthusiasts seeking a more luxurious alternative to tents or trailer tents.

During the development of Basecamp the design team at Swift created a variety of stylish and funky optional graphic schemes to choose from, all of which were intended to complement the vehicle’s unique exterior profile. Chunky graphite mouldings coupled with chrome grab handles create distinctive accents that result in an exciting exterior appearance. Tinted double-glazed windows and 14” Scorpion alloy wheels serve to complete the sporty look of the Basecamp design. The interior has been cleverly designed to optimise space and provide adequate storage, even for bulky sporting equipment with access through a wide central rear door. The front profile sweeps up to a large panoramic front window and ties through to the vehicle’s rear panel. Below the front window is the housing for a gas bottle and spare wheel. Basecamp is constructed using the Swift SMART Intelligent Construction system, which was introduced by the company in 2014, with the letters of the word SMART representing the system’s specific benefits of being Strong, Modern, Aerodynamic, Resilient and thoroughly Tried and Tested. 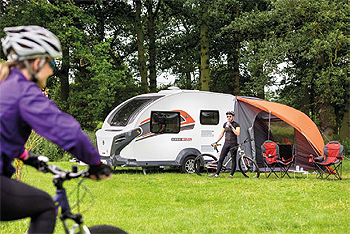 “Basecamp is a new fun, fresh and funky cross over camping vehicle, which has been specifically designed for outdoor adventurers with a host of useful features like anchor points, removable storage baskets and fold away seating to make space for bulky equipment. The vehicle only weighs 879kg mass in running order (MRO), meaning that it also towable by many smaller cars,” Nick says. “The design is built using the innovative SMART plus construction system and packs a huge amount into its compact size including panoramic window, washroom with shower, kitchen area, Grade 3 heating and seats that convert into one of the largest double beds available. Basecamp can also be customised with 13 different exterior graphic schemes to choose from and the option of a bespoke Vango airbeam awning that increases the living space.”

With spirited investment into its manufacturing facilities and the release of exciting new leisure vehicles and prestigious holiday homes, the coming years are set to be rich in opportunity for the Swift Group. “Despite the political and economic changes over the last few months we continue to experience healthy growth across all sectors, driven by new developments and redesigned ranges such as Escape. We will continue to focus on the principles that have made Swift the UK’s number one manufacturer, including strengthening our partnerships with suppliers and dealers,” Nick concludes. “Strategically our focus will continue to be on new and existing product development, operational efficiencies, increasing our commercial capabilities, geographic expansion and growth.”