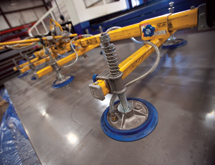 There’s more to a component than simply being able to see how it fits into a larger assembly. Although it can be tempting to look at a component merely as a piece of a larger puzzle, each piece of that puzzle has its own puzzle that needs to be solved for maximum benefit. Helping customers see the hidden side of their components is what T&D Metal Products has been doing for more than 60 years, and third-generation owner Shane Dittrich says the company’s ability to work closely with customers is what sets it apart from the rest of the industry.

The company was founded in 1951 by Dittrich’s grandfather, Howard, and partner Otto Tauck. Shane Dittrich says he grew up in the business, which gave him all the necessary experience to take control of the company following his father’s retirement in 2011. T&D Metal Products has been operating out of its current facility in Watseka, Ill., for more than 40 years, servicing a wide range of customers with metal, fiberglass and plastic fabrication of components. Dittrich says the company’s customer base ranges from small players to global organizations such as AT&T, Ford and Caterpillar.

“Our largest customer today is only 12 percent of our total sales,” Dittrich says. “We’re very diversified in our mix as far as our product offering and our customer base, as well.”

Although the company faces stiff competition in every market segment it serves, Dittrich says T&D Metal Products distinguishes itself through its willingness to collaborate with customers beyond simply taking a design and making a part. Although many manufacturers are content to simply take a customer’s design and put it into production, no questions asked, T&D Metal Products takes a more hands-on approach that considers every aspect of the component.

“We really try to move from concept to completion on any kind of part,” Dittrich says. “We don’t consider customers customers – we consider them partners.”

T&D Metal Products has the capability to perform a lot of engineering work by collaborating with their customers, both small and large. By collaborating on the front-end of a project using a “collaboration equals innovation” approach it gives the customer the ability to identify areas in which it could improve the design and save time and money. For example, Dittrich says the company regularly works with major customers such as Caterpillar, John Deere, Komatsu and others. Recently, they saved one of these large companies nearly $6 million a year on one set of parts by examining the production process on a series of components and identifying ways to simplify its production. The company also collaborated with another large customer on a cab door design that reduced the number of fabricated parts, the amount of welding and grinding required, along with improved logistics.

Dittrich says keeping up with the ever-changing conditions of the manufacturing world is the biggest challenge for T&D Metal Products or any supplier. He says part of his job as one of the company’s leaders is making sure the internal culture is one that is ready for change and can accept it without resistance or hesitation.

One of the most prominent ways T&D Metal Products is preparing itself for change is through technology. Dittrich says the company is in the process of installing a new enterprise resource planning system, which it expects to have up and running by mid-2014. The new system should give the company a clearer picture of its operations and make it easier to update customers on the status of their projects, he adds.

Having that type of up-to-the-minute view of its entire operations has become more important in recent years, as more customers are trying to divest themselves of inventory. Dittrich says many customers are attempting to convert their manufacturing to a just-in-time model, which makes it easier for them but places greater pressure on suppliers like T&D Metal Products. “I think every company today is putting more pressure on their suppliers to do more for less,” he says. “In turn, this often has the same effect on employees.”

Despite the challenges that come with customers’ changing needs and the changing nature of manufacturing, Dittrich says T&D Metal Products anticipates a great deal of growth in 2014 and beyond. The fact that the company can work closely with customers in a variety of sectors with the same level of effectiveness means there will be plenty of opportunities with its core customers as well as with new ones. “I think we’re going to continue to diversify our customer base,” Dittrich says.