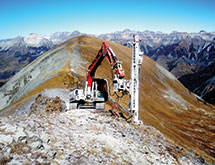 Since its earliest days, TEI Rock Drills has been committed to manufacturing superior, American-made drilling equipment. Founded as Tech Enterprises Inc. in 1980 in Montrose, Colo., by Bill Patterson, TEI Rock Drills remains a family owned company that has become a leading manufacturer of drilling attachments and limited-access drills.

“We have three main product groups: drilling attachments, limited-access drills and drilling components,” Vice President Joe Patterson says. “We employ 39 people in our Montrose factory, which is where we build everything. We have a sales team that is selling direct in the United States, and we also have distributors all over the world. Internationally, we’re seeing increased business in the U.K., and we also do well in South America, Australia and New Zealand. We’re just now starting to get involved in India and Asia, too.”