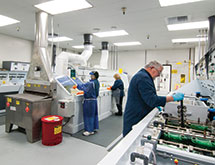 Teledyne TWT Products operates in a decidedly high-tech marketplace. It produces an electronic product – a microwave tube assembly – that allows for the direction of energy along frequency bands for use by a U.S. fighter aircraft to jam enemy ground radars, for example.

“It is a high-tech product that has been around since the 1960s,” General Manager Michael G. Ryan says. “It is on the majority of military aircraft and vessels.”

“Our state-of-the-arts products are found on nearly all major electronic warfare, radar and communication platforms of the United States and its allies throughout the world,” the company says. “Teledyne TWT Products recognizes and strives to meet the needs of our customers with quality, value and service at competitive prices.”

Ryan says Teledyne is preparing to release a high-powered, solid-state version of the same product. “We’ve spent the past couple years developing that product,” he notes.

The new product has been developed at the suggestion of military clients. “People are very interested in replacing older technology with newer designs,” Ryan says. “Development is going quite well.”

Teledyne TWT Products has begun initial production of prototypes of the new solid-state version of TWTs. They are being manufactured at the company’s 160,000-square-foot Rancho Cordova, Calif., facility.

“The mindset of the industry is that solid state is the wave of the future,” Ryan explains. “Rather than having another form of our product cannibalize us, we’ve decided to get ahead of the curve and be the first in the market with the next upgrade.”

Its modular nature is a major advantage of the new solid-state technology. When repairs are needed after 18, 24 or 36 months of constant operation, individual parts can be replaced instead of the entire unit. “That’s a real benefit to the customer,” Ryan says. “It is an ease-of-use advantage.”

In addition to the U.S. military, Teledyne TWT Products serves markets such as university test labs and satellite uplinks. However, the military is its major customer, and last year business was down.

“The federal government had sequestration and we felt the effect of that,” Ryan reports. “There were also furloughs so spending was down.” However, over the past seven months business has picked up again. The TWT industry is worth about $450 million and Teledyne TWT Products’ marketshare is between 12 to 15 percent. It aims to increase this revenue of $67.5 million to $100 million in the next three to five years as it leapfrogs its competition with its new technology. “We only really started marketing this in January and it’s been incredible,” Ryan says. “The interest is very strong.”

The product is manufactured with a technique using vacuum envelopes. Teledyne TWT Products’ manufacturing process is marked by orderly kaizen and 5S processes, and its workforce is highly skilled and experienced. “We have a very mature workforce,” Ryan says. “The average employee has more than 20 years with the company and most have worked here 25 to 30 years. They are familiar with the product and industry.”

Ryan says the Rancho Cordova facility is “incredibly clean and efficient. If you compare us to others who make what we do, it is like comparing a clean room versus a dirty garage pile. A lot of places are like mechanics’ workbenches but we are very orderly.”

Teledyne TWT operates “very tight, neat work cells,” Ryan says. Employees are cross-trained and capable of working on all products. As a division of a $3.8 billion conglomerate, Teledyne TWT also enjoys ample capital investment and works with $100 million in equipment. “It is a very capital-intensive business,” Ryan says.