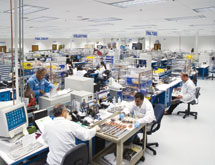 A leading force in the design, development and manufacturing of broadband high-power helix traveling wave tubes (TWTs), Teledyne TWT Products is a key player in the electronic warfare, radar and communication sectors in the United States. Formerly known as Teledyne MEC, the company has joined with six others, forming the Teledyne Microwave Solutions group to provide a full range of microwave technologies. The new group is a major piece of the Teledyne Technologies family of high-tech companies.

Teledyne TWT Products has a history of more than five decades with TWT devices that dates back to its days in the Palo Alto area. Today, it is housed in Rancho Cordova.

“The company moved to Rancho Cordova in the 1980s and had about 75,000 square feet here, as well as operations in Palo Alto and Mountain View [Calif.],” General Manager Michael Ryan says. “We shut down Palo Alto operations in 1992, and doubled the size of this facility in 2004.”

Teledyne TWT Products’ main manufactured components are TWTs, and the majority of its user applications are in the military.

“About 85 percent of our business is done with the military, on anything from a standard radar system to electronic warfare jamming applications,” Ryan says. “They’re used mostly on airframes and radar systems, with a growing presence on helicopters.”

Although these devices are relatively expensive and complicated, they are in demand and reliable. Ryan says they must be handcrafted, in a sense. The products go through weeks, or even months, of pre-delivery testing to ensure they will not fail once they are in use. These devices can get anywhere from 25,000 to 50,000 hours of use in critical situations, so it is crucial that Teledyne TWT Products continues to deliver exceptional quality.

“We have a direct sales force and a mature company with an average employment length of 25 years,” Ryan says. “People here have been in the industry for a long time, so we have knowledge of the platforms in existence, as well as what’s on the horizon.”

The company has a fairly long lead-time of about 18 months on new project development, and it uses the knowledge it gets from customers in the engineering process. This is to ensure that the company is adequately satisfying customers’ needs in terms of product power, reliability and weight.

Teledyne TWT Products also is highly attuned to working in the defense environment, and it is capable of dealing with the ebbs and flows that come along with changing conditions such as budget and program cuts.

Another aspect of Teledyne TWT Product’s operations that stands out is the fact that almost all of its products and processes are 100 percent American. Part of this is required because it is a military contractor, but part of it is indicative of a commitment to American labor and materials.

“We do have some competitors both foreign and domestic, but for the most part we manufacture unique products,” Ryan says. “I think if you look at the quality of our products, we have a strong engineering and production competency that gives us a leg up on the competition. We know it is possible to make a great product in the United States, one that is respected worldwide and made with almost 100 percent U.S. content, other than rare earth metals.”

Teledyne TWT Products regularly makes internal investments to support growth and improve design, development and manufacturing. The most obvious example of this was expanding its facility and moving all operations to Rancho Cordova earlier this century. But it also hires many people with a military background and intimate knowledge of its products and their field use.

Additionally, Teledyne TWT Products has streamlined manufacturing. The company does most of its machining in-house and has created a process flow that ensures that all products move from one end of building to the other as efficiently as possible, all the way to final testing and shipping.

“We have several people on staff with strong backgrounds in Kaizen and 5S training, which helps us look for continuous improvement,” Ryan says. “As a corporation, Teledyne also has a Price of Non-Conformance, or PoNC, initiative that is always looking for ways we can make our operations more efficient.”

Today, Teledyne TWT Product’s biggest end-users are the U.S. Air Force, Navy and Army, and that is unlikely to change. But Ryan says Teledyne as a corporation is concerned with growth, so Teledyne TWT Products is looking for ways to keep up with changes in its primary military markets. This includes supplying more devices for helicopters and unmanned aerial vehicles as the military moves toward those platforms, and expanding the company’s product categories to include TWT amplifiers (TWTAs) and solid-state high power amplifiers (SSPAs) to supply next-generation technology needs.

At the same time, the company is expanding the commercial sphere of its operations. In the past, it stayed away from commercial opportunities, preferring to specialize in military applications. Now, it seeks to become more diversified. Ryan says the company has an extensive commercial business with Ka-Band technology, which revolves around satellite uplink applications for high-definition TV. That is a new, active and growing market.

Lastly, the company will continue to rely on the skills of its people and provide career paths for those who want to take on more responsibility. “I have always believed that it is important to show people that there is an opportunity for them to grow within the company,” Ryan says. “We challenge ourselves to promote from within, and we want our people to be moving up the ladder constantly.”