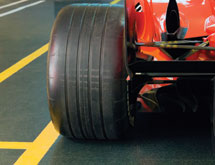 In 1968, a car exploded during the pre-trials of the Indianapolis 500. The driver of the car came out of the flames engulfing his vehicle completely unharmed. His name was Mario Andretti and he went on to win the race that year. The suit that saved his life was made by protective fiber developed by TenCate. “One of the first pieces of clothing done with fire protective fabric was done for a racing team, not for firefighters,” explains Mike Anderson, vice president of operations for TenCate Protective Fabrics.

Over the last 40 years, Tencate has pioneered the most innovative protective fabrics in the world. Tencate is not only the undisputed global leader as the largest manufacturer of protective gear, but it also holds the No. 1 place as the most innovative company, with cutting-edge technology in advanced fibers and a deep understanding of the protection needed for a variety of activities. Firefighters, soldiers, oil and utility workers benefit from the protection of TenCate fabrics.

“We are the only manufacturer that makes all inherent flame resistant products,” Anderson explains. “We do not add a treatment to the fabric; it is the fabric itself that is fire resistant.” The cutting-edge technology in the materials used in its products is what has put the company at the head of the industry. “We are worldwide innovation leaders and we have the biggest share of the market worldwide,” Anderson says.

TenCate has made great strides in the development of fire-proof fabrics. “Firefighters [prior to 1969] were wearing 100 percent wool suits, which were very hard to treat, were difficult to keep dry and became heavy when they got wet,” Anderson explains. “Our fire-resistant fibers are light, protect better and can have moisture repellent on them, which keeps moisture away from the body,” Anderson says. “The purpose of having moisture-wicking fabric is to prevent steam burns. Steam burns and heart attacks are the biggest causes of death among fire fighters,” he continues. “By having the lighter product, it alleviates the effort they exert, since they already have to carry so much equipment around with them, but also, having a product that will pull the moisture away from them to prevent steam burns was important.”

TenCate’s product innovation staff is constantly looking for new technologies and new solutions. When the United States went to war in Iraq, soldiers were coming back with severe burns caused by improvised explosive devices (IED). TenCate developed a material for the U.S. troops uniforms called Defender™. “They were coming back horribly maimed because the fabrics they had were not protecting them,” Anderson explains, “so we developed this product to protect the soldiers. Now, we provide the uniforms for 100 percent of the Marine Corps and the Army in combat. Those soldiers are wearing products with fabrics made by TenCate.”

For a different kind of battlefield – one where utility workers, oil refinery employees, electricians, foundrymen and welders toil – the company has developed state-of-the art fibers to protect them from risks. “In the last 10 or 15 years we have seen an increase in safety regulations in the entire world to keep workers safe,” Anderson says. “There is a bigger concern for worker safety than ever before.”

TenCate has also made great strides to protect the environment. “We are trying to be the best stewards for the environment that we can be. We have recycling programs in every plant; we recycle our products, we recycle cardboard, pallets, we try to make sure that as little as possible ends up in a landfill,” Anderson explains.

The company’s dyeing and finishing facility in Molena, Ga., has been awarded the Environmental award by the Georgia Waste Water Pollution Control Association, for its innovative water recycling system in that facility. “This plant is 100 percent self sustained,” Anderson says. “The water we use to treat our products comes from wells and from an adjacent lake owned by the Boy Scouts of America. The company formed an agreement with them 20 years ago and developed a system, with the help of the state of Georgia, to recycle and reuse the water without polluting the lake or the aquifers underground.” TenCate is the only company in its industry that uses this process.

Anderson admits that running the fabric development plants is not easy because of the high technical level of the product, and the fact that there is no margin for error. “If you make a mistake in a garment, you can be putting somebody’s life in jeopardy,” he says. “Most of our associates have an average of ten to 22 years of experience. We have maybe a 4 percent turnaround rate. The workers are very proficient at what they do.”

The company will continue to grow and innovate for years to come. “When I started in this business 30 years ago, we had five or six fabrics, today we are up to 26, with new ones coming out all the time,” Anderson recalls. The demand for its products is so great that the company’s plants function 24 hours a day, seven days a week, including some major holidays. “It’s important to deliver our products on time, so we work very hard to keep our customers happy,” Anderson says. With that strong work ethic and the best product of its kind in the market, TenCate is poised to keep growing and innovating for years to come. mt