Back to Profile Gallery > Tesla Motors 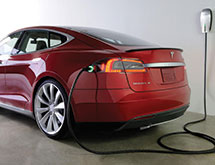 Tesla Motors is steadily on the track to achieving its not-so-secret secret plan. In 2006, three years after the company was founded, Co-founder and CEO Elon Musk divulged Tesla Motors’ true intentions in a blog titled “The Secret Tesla Motors Master Plan (just between you and me).” It turns out that producing ultra-cool electric sports cars is not the plan but rather a byproduct of the plan.

“The initial product of Tesla Motors is a high-performance electric sports car called the Tesla Roadster,” Musk says in a blog post. “However, some readers may not be aware of the fact that our long-term plan is to build a wide range of models, including affordably priced family cars. This is because the overarching purpose of Tesla Motors (and the reason I am funding the company) is to help expedite the move from a mine-and-burn hydrocarbon economy towards a solar electric economy, which I believe to be the primary, but not exclusive sustainable solution.”

In 2008, two years after Musk wrote those words, Tesla Motors stepped onto the scene with the Tesla Roadster, which was step 1 in achieving its secret plan – to design a high-end electric sports vehicle that can outshine gasoline sports cars like Porsche and Ferrari with twice the energy-efficiency of a Prius. The cash flow from those sales were promptly reinvested into the company so R&D could go full steam into the second piece of the secret plan, which was to build a luxury sedan at a lower price point than the Tesla Roadster. The result was the Tesla Model S, which hit the market in 2012 and has received numerous accolades. Now the company is preparing to enter volume production of its Model X. Tesla Motors describes the Model X as “a crossover utility vehicle that blends the best of an SUV with the benefits of a minivan. As stylish as it is functional, Model X is a vehicle above category.”

As Tesla Motors continues to hop each stepping stone in its secret plan, consumer demand for its growing family of vehicles is on the rise. In 2013, Tesla Motors produced more than 22,000 cars, and approximately 35,000 cars in 2014. By the end of 2015, Tesla Motors expects to have increased production by another 50 percent. The growth prompted the company to temporarily pause production last year at the Tesla Motors Factory in Fremont, Calif., so it could expand the facility’s capacity.

“During the pause in production, we upgraded the assembly line, added capacity to the body shop, enhanced powertrain assembly and revamped facilities for our employees,” the company says. “The result of this retooling phase, which complemented ongoing upgrade work, is a much-expanded operation that allows us to produce more cars faster, while increasing automation and providing a more inviting work environment.”

The most striking changes to its Fremont facility are found in general assembly. The company has eliminated a lot of overhead steel and mechanical structures in favor of advanced robots that can lift and maneuver entire cars with precision while taking up less space. The next step is to design robots that can install battery packs in the cars, “relieving humans of the most labor-intensive operation in the factory and reducing installation time from four to two minutes,” Tesla Motors says.

Another highlight is the revamped floor plan. The cars now move down the assembly line as associates work on them, enabling a streamlined and more consistent workflow. Tesla Motors says the line is now running at about 1,000 cars per week and has potential to run more with slight tweaks.

Tesla Motors is also building a new section of the factory for production of the Dual Motor Model S. The drive units for this model will be produced on a highly automated line that is laid out with room to grow so future capacity increases can take place with minimal disruption to existing operations.

Another critical investment Tesla Motors made was to add conveyors and advanced robots in the powertrain department, giving it the capacity to process 1 million battery cells per day, up from 800,000. The company added welding equipment and improved production up-time from 5 to 10 percent, “thanks in part to a 13-car buffer that guards against bottlenecks,” Tesla Motors says. “We’ve also added 24 new tire and export docks to the perimeter of the main building, increasing the speed with which we can deliver cars overseas.”

In addition to purchasing new equipment, Tesla Motors also made significant upgrades to the manufacturing environment. The facility is now brighter with skylights, energy-saving LED lamps to replace fluorescent lights, and bright white floors and walls as opposed to the previous grays that adorned the building. There are also a few novel touches. For instance, climbing plants wrap around several pillars, adding some greenery to the atmosphere. Also, Tesla Motors commissioned a comic artist to depict the manufacturing process in a series of illustrations, which are printed on the glass walls enclosing some of the robots. For added artwork, a wall of framed photos detail the building’s evolution over the years.

“The photo wall serves as homage to the evolving auto industry and a reminder of the factory’s past,” Tesla Motors says. “For 26 years before Tesla moved in, the factory was home to General Motors and Toyota’s New United Motor Manufacturing Inc., which produced 500,000 cars a year. GM had built up the factory two decades prior to that. Our work in Fremont builds on those foundations.”